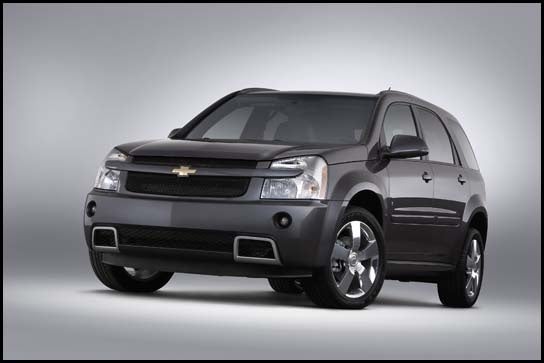 Although it resembles a small SUV, Chevrolet calls the Equinox a crossover vehicle -- the first in the automaker's lineup. The growing appeal of vehicles like the Equinox lies in the fact that they offer sedan-like handling, ride, and safety features with SUV-like space and towing capability. Chevy makes a point of noting that the Equinox has more space behind the rear seat than the Honda CRV or the Ford Escape, yet the vehicle also excels in front and side-impact crash tests, adding to its appeal as a functional and stylish family vehicle.

Building on these facts, Chevy expands the Equinox lineup for 2008 with the addition of a new Sport version. To improve the sportiness of the new trim, Chevy lowered the ride height, removed the roof rack, added a body-color fascia, and upped the power with a 263-horsepower, 3.6-liter V6 engine, an increase of more than 40 percent over the standard trim's 185-horsepower V6.

Chevy also added a new upscale Equinox LTZ trim, with heated front seats and a premium Pioneer sound system with a CD changer, among other features. It joins the LT1 and LT2 trims in the lineup. All trims come in front-wheel and all-wheel-drive versions.

Other than the new trims, Chevy made only minor changes to the Equinox for 2008. OnStar has been added to the standard equipment list for all trims, with the capability to add OnStar's new GPS satellite navigation system. Chevy also adds a new Electronic Trailer Sway Control feature, integrated into the vehicle's StabiliTrak Electronic Stability Control System.

What's your take on the 2008 Chevrolet Equinox?

Timed_out_inLG Timed out in LG I bought my 08' Sport brand new in Feb 2009, and LOVED it until Dec 2014, when I had to have my timing chains, tensionors, and guides replaced. Now I am having the same issue just 11,432 miles later. GM will not repair again, as it is a recurring issue, and it happened a couple days, yes I said A COUPLE DAYS out of the 1 yr, 12,000 warranty on the repair, again I mention, that I had put only 11,432 miles on the car in that time. There is nothing in writing on my repair order that says the repair is only good for 1 yr, 12,000 miles, and the Service mgr told me, as well as other mechanics I have spoken to, that I was not going to have this issue again, if we repaired. Since picking it up, I have had it back to the dealer for numerous issues, and check engine warnings. I have replaced the Shifter Assy, ECM, a thermostat, a couple vapor sensors, the gas cap, and now I need an instrument cluster due to the gas gauge sensor, and have lost power to my rear wiper motor. My front brake rotors and pads need to be replaced AGAIN! I have to do about once a year, and now have a antifreeze smell when driving. I have found that this is the same engine that was recalled in the Caddy's, and is in some Acadia's, which has had the warranty extended to 120,000 for this issue. I would think that a $3000.00 plus repair job would last more than 11,000 miles, and am extremely offended that GM thinks I am an idiot, and do not know that this is a DEFECT!!!

GuruT13CM I don't have a take on this vehicle as I don't own it. I had wanted to purchase this vehicle but my husband talked me into purchasing the Saturn Vue 2008. I find the seats are short and the pick up power is not what I need. I'm sorry I made this decision. I purchased it in 2011.

Users ranked 2008 Chevrolet Equinox against other cars which they drove/owned. Each ranking was based on 9 categories. Here is the summary of top rankings.

Have you driven a 2008 Chevrolet Equinox?
Rank This Car

Why Are All My 2008 Equinox Dash Lights On At One Time?

Hello, I have only had this truck a year, should have done more research. I drove to work, No dash alert lights were lit. Came out and started it and the 4wheel, engine, abs, traction....all lit up....

I was driving home from an hour long trip yesterday the vehicle stopped at the top of a small incline and i believe the engine shut down I could not get it to fire back up it tried to crank but noth...

Cannot Remove Ignition Key When I Turn Off Car

ignition does not return to off postion

Why Is The Paint Peeling Off All The Way To The Metal? I Am Scared To Wash ...

Some one please help it makes u not proud of what u are driving when the paint is peeling out!!!!i do have pictures on my phone it is bad!!!!

I noticed on my drive one morning to work the dash was displaying this message and the temperature gauge was all the way down. The next time i drove the car and since then, i haven't seen this mes...