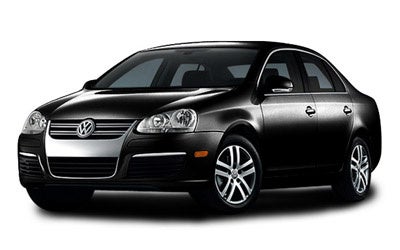 The Volkswagen Jetta comes in five flavors for 2007. The base (or Value Edition) Jetta is equipped with a 150-horsepower, 2.5-liter five-cylinder engine that provides plenty of power under the pedal off the line and in passing situations, and comes with a generous list of standard features, including air conditioning, cruise control, power windows, power door locks, and a CD player.

Next up is the Jetta 2.5, with the same five-cylinder engine and such additions as a multifunction trip computer. For a bit more power, drivers can opt for the Jetta 2.0T, with its turbocharged 2.0-liter, four-cylinder engine that pumps out 200 horsepower with lower emissions.

The sporty Jetta GLI also comes with the turbocharged four-cylinder engine but adds a sport package with special bucket seats and a tighter suspension. And new for 2007 is the Jetta Wolfsburg Edition, which is equipped with such features as 16-inch alloy wheels, a sunroof, leatherette seats, and heated front seats.

Among the standard features and options available in the 2007 Jetta are 12-way programmable front seats, dual-zone climate control, a multifunction steering wheel with controls for the radio and CD player, a new chrome grille, and power side mirrors with blinkers.

What's your take on the 2007 Volkswagen Jetta?

Users ranked 2007 Volkswagen Jetta against other cars which they drove/owned. Each ranking was based on 9 categories. Here is the summary of top rankings.

Have you driven a 2007 Volkswagen Jetta?
Rank This Car

Wont Start After I Replaced A Part.

I replaced a part on my 2007 Jetta 2.5l manual transmission and hooked the battery back up and the is power, but when I try to start it, nothing happens at all. I push the 0.0 button and the dash l...

Why Won’t My Vw Jetta Turn On/ Go

Okay so I hope somebody can help me understand ! I am a female and got 3 different male opinion and getting something different everytime ... so long story .. I have a 07 vw Jetta 2.5 , I was havin...

My 07 Jetta when I say started I put a new ignition in it and when I started it starts and then it quits I am sitting in a parking spot where I have to move it ASAP if not they're going to tow it a...

Let me give some back ground. I haven't run the car in a couple of weeks. I was running it to charge the battery a bit. While it was running, I pulled a 10A fuse from the dash panel. The car st...