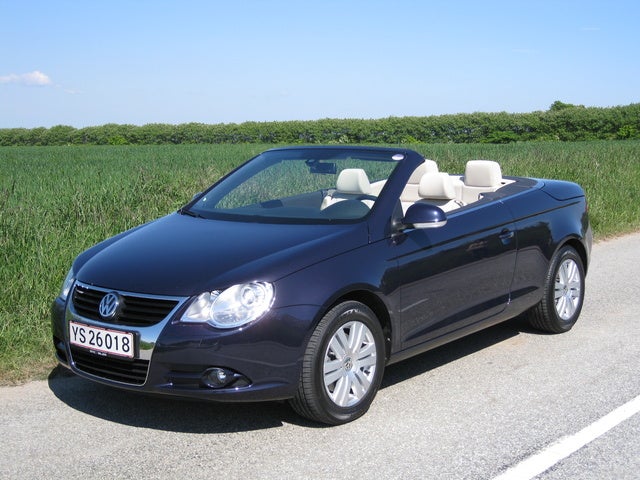 A successor to the Volkswagen Cabrio, which itself was a successor to the Rabbit Cabriolet, the 2007 Volkswagen Eos hardtop convertible coupe is the latest addition to the German automaker's lineup. And although it borrows elements from both the Jetta and the Golf, the Eos is a unique creation, starting with its eminently impressive five-piece hardtop roof.

The Cabrio's roof was a multi-layer cloth affair that was either manually or power operated (depending on the trim package). The Eos goes that one better (way better, in fact), with a five-piece automatic folding hardtop that stows neatly in the trunk in just 25 seconds. It's a fascinating operation that many drivers are certain to watch over and over, just for the fun of it. The hardtop roof also has an integrated panoramic power glass sunroof with tinted glass and a manual sunshade, so drivers have a number of roof up/down/shaded/open-to-the-wind options.

Two trim packages are available -- the standard Eos and the Eos 2.0T. The standard engine is a 2.0-liter 4-cylinder that generates 200 hp, while a 3.2-liter, 250-hp VR 6-cylinder is available as an option. A six-speed manual transmission is standard, while a six-speed automatic transmission with Tiptronic and a Direct-Shift Gearbox is optional for the 2.0T trim package.

So far, drivers seem to be impressed with the car, with one calling it "the best convertible I have ever seen." The five-piece retractable hardtop, naturally, is a focal point of the positive comments, and deservedly so. But the car's luxury features, handling, craftsmanship, and styling have also been singled out by impressed drivers. Some professional reviewers, however, have been less than kind, particularly in reference to the car's styling, with one reviewer calling the car "dumpy and squat" with the roof up. Guess you'd better just keep the top down, then . . . and that's not such a bad thing.

What's your take on the 2007 Volkswagen Eos?

Guru9DQ1HP We have one. Had it for about 100,000 miles now. It's a blast. Fun to drive, handles well, quick (especially compared to my diesel Jetta). It's technically my wife's but I drive it whenever I can.

Have you driven a 2007 Volkswagen Eos?
Rank This Car

How Do I Place An Ad

Can The VW EOS Be Towed Flat On Four Wheels Behind An RV Motor Coach?

Can the VW EOS be towed flat behind a motor home?