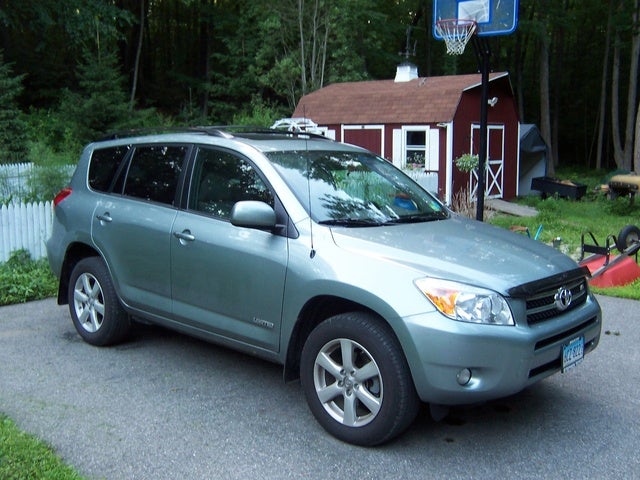 Average user score
4.6 ⁄ 5 stars
Based on 41 reviews
Sporty Ravvy by Travis — The new redesign of the RAV4 for 2007 is impressive. It looks much more appealing than earlier versions. Outside the grill is nice and shiny, the wheels are decent looking, and the rear spoiler is app... Read more
Love My Toyota by Pam — This is my Second Toyota - the first one Saved my life in an accident so I am a Toyota Owner for life. The Rav4 is Roomy - with tons of head and leg room for passengers in front and back seats, and th... Read more
My Favorite Suv Ever! by YoavShapira — We leased a new 2007 RAV4 (Limited) a couple of months ago, and we absolutely love it. The Barcelona Red color looks awesome. We got the bigger engine (269 horsepower V6), and you can really feel th... Read more

In the compact crossover SUV segment, the 2007 Toyota RAV4 gets almost everything right. 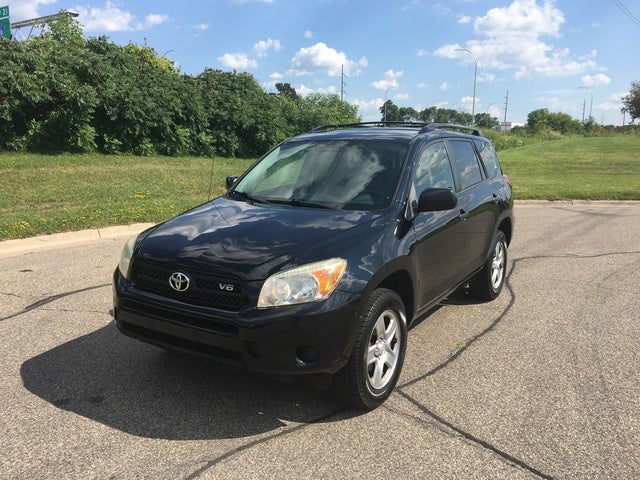 Among the largest of the small crossover SUVs on the market, the 2007 Toyota RAV4 is big enough to offer an available third-row seat, though it's suitable only for children. Maybe.

Coming off a complete redesign last year, the 2007 RAV4 now includes front-seat, side-impact airbags and side curtain airbags as standard equipment. Additionally, Bluetooth hands-free calling capability is available, though you must upgrade to the optional JBL premium sound system in order to get it.

The 2007 RAV4 comes in Base, Sport, and Limited trim levels with a choice between a 4-cylinder and a V6 engine and front-wheel or all-wheel drive. 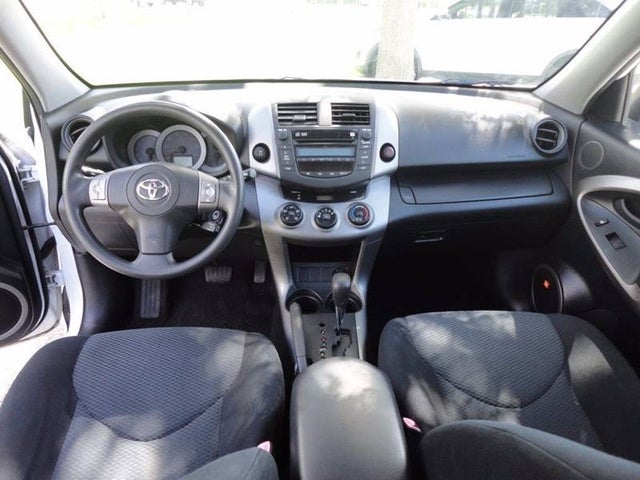 Attractive styling makes the latest RAV4 an appealing alternative to some of this Toyota’s competitors, though it looks less purposeful than the previous-generation model. At least the spare tire remains on the rear cargo door, underscoring the fact that the RAV4 is an SUV and not a station wagon. Sport trim is especially appealing thanks to 18-inch aluminum wheels, fog lights, and body-color fender flares.

Form takes no backseat to function inside of the RAV4. True, the layered dashboard is a model of ergonomic simplicity and useful practicality, but round air vents, a dual glovebox design, and funky triangular trim around the front door releases lend this SUV a sense of style.

Unfortunately, in order to keep the RAV4’s price down, Toyota panels everything in hard plastic. On the one hand, it’s not shiny, which would make it look worse. But the matte finish on the black upper portion of the dashboard easily shows scratches and smudges. Even running a finger across it appears to leave a trail of smeared dust mixed with dry skin flakes. Yuck. 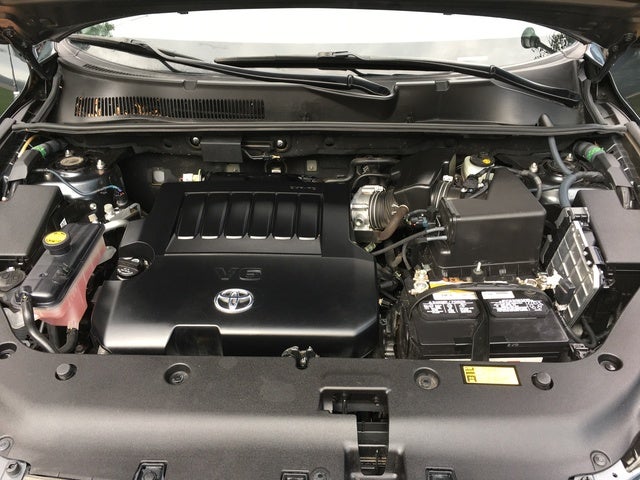 Thankfully, all of that hard plastic might be the worst thing about the 2007 RAV4. Mechanically, at least, this SUV impresses.

The standard engine is downright indestructible, a 2.4-liter 4-cylinder making a modest 166 horsepower. A 4-speed automatic transfers the power to the RAV4’s front wheels, and an all-wheel-drive (AWD) system is an option. With AWD, a Lock function evenly distributes the power between the front and rear wheels in order to maximize traction at low speeds.

We recommend the optional 3.5-liter V6, which runs an extra two grand give or take, depending on trim level and equipment. That’s a big price premium, but this engine is good for 269 hp. Just try finding that in a Honda CR-V. Plus, the V6 can easily tow up to 3,500 pounds of trailer.

For the record, the V6 engine uses a more sophisticated 5-speed automatic transmission, which helps it achieve fuel economy numbers close to those of the 4-cylinder. According to EPA estimates, the 4-cylinder engine gets 22 mpg or 23 mpg in combined driving while the V6 rates 21 mpg to 22 mpg. How can that be? The V6 doesn’t need to work as hard to motivate the 3,500-pound RAV4.

Based on test driving the Sport AWD with the V6, the RAV4 puts into bold, capital letters the ‘SPORT’ part of sport-utility. Pull up next to an unsuspecting driver in a Honda Civic Si, and you’ll roast the sport compact. You might even surprise a V8-powered Mustang driver. According to some publications, the V6 rockets this SUV to 60 mph in just over six seconds flat.

Stomping on the RAV4 Sport V6’s go pedal is enormously satisfying, and this Toyota can take corners with grace, too, thanks to its sport-tuned steering and suspension. Skip the V6 and the Sport trim, and the RAV4 is decidedly less invigorating to drive but proves satisfying in the mechanically refined manner common to Toyotas. 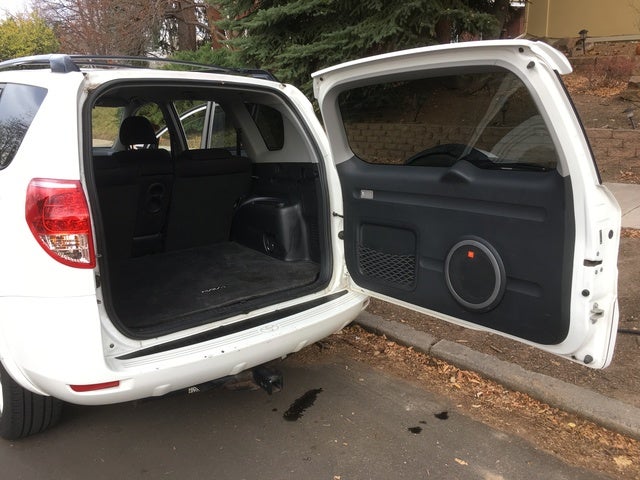 As is true of most compact SUVs, the base RAV4 gives you everything you need and nothing you don’t. It has air conditioning, cruise control, a tilt/telescopic steering wheel, and power windows, locks, and side mirrors. The stereo includes a CD/MP3 player and comes with an auxiliary input jack. Dark-tinted privacy glass keeps prying eyes out of the cargo area, and this version of the RAV4 rolls on purposeful 16-inch steel painted wheels.

Sport trim adds 18-inch aluminum wheels, fog lights, sport-tuned steering and suspension components, heated side mirrors, and a roof rack. The yummy V6 engine is an option. Get it.

Up front, the RAV4’s seats are acceptably comfortable, and the Limited’s power seat adjustment certainly helps. Unfortunately, though, the hard plastic on the upper front door panels really takes a toll on your elbows if you rest them there. Backseat passengers enjoy plenty of legroom, and the seat slides on a track to expand legroom for third-row occupants or to maximize cargo space.

Speaking of which, there is 36.4 cubic feet of volume behind the rear seat, and without the third-row seat option, the cargo floor is quite low to the ground, making it easier to load the SUV. The side-hinged rear door, however, is less than ideal, even if it does give Toyota a place to hang the spare tire to keep it easily accessible while at the same time maximizing cargo space. Fold the rear seats down, and the RAV4 holds up to 73 cubic feet, as much as some midsize SUVs.

Every 2007 Toyota RAV4 has a CD/MP3 player and an auxiliary audio input jack. Upgrade to Limited trim for a standard 6-disc CD changer. This version of the RAV4 also includes dual-zone automatic climate control and offers an optional JBL premium sound system.

New for 2007, the JBL system includes Bluetooth hands-free calling. Simply pair your cell phone to the stereo using a wireless signal, and you can both take and make phone calls without holding the phone. 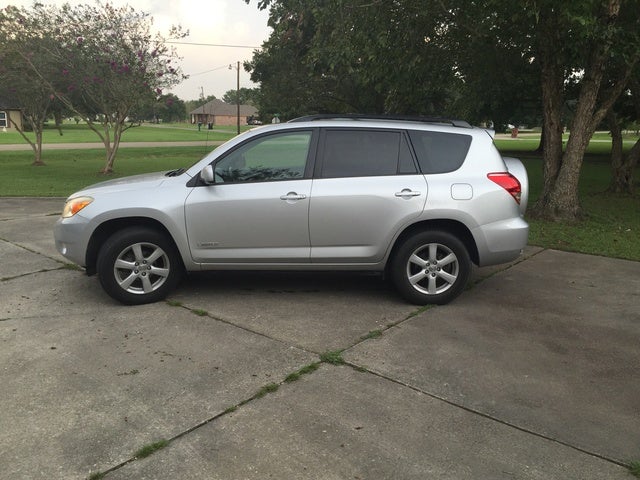 Standard safety equipment for the 2007 RAV4 includes antilock brakes, stability control, dual front airbags, dual front side-impact airbags, and side curtain airbags. This year, the side airbags are standard rather than optional. That’s a good move on Toyota’s part because with these extra supplemental restraints the RAV4 performs well in crash tests.

The Insurance Institute for Highway Safety (IIHS) gives the RAV4 a Good rating in the frontal moderate overlap test and in the side-impact test. Roof crush strength measures Acceptable, while the seats and head restraints get a Marginal rating from the IIHS.

This SUV gets high marks from the National Highway Traffic Safety Administration (NHTSA), too. It earns 5-star ratings in all assessments except for the front passenger in a frontal-impact collision, for which the SUV receives a 4-star rating. The rollover resistance rating is also 4 stars, which is fine for an SUV. 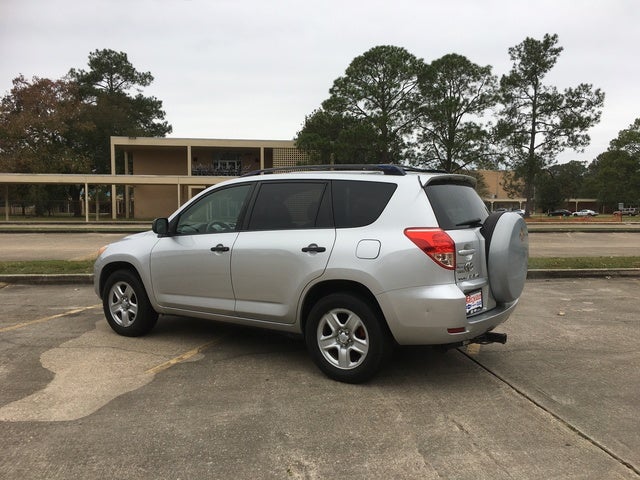 We think so, and especially with the V6 engine. In exchange for about $2,000 and a barely perceptible dent in fuel economy, a RAV4 V6 speaks softly but carries a big stick. Plus, the Toyota RAV4 has proven over time to be exceptionally reliable and to hold its value well.

The question isn’t why you should buy a Toyota RAV4. Rather, it’s why wouldn’t you?

Users ranked 2007 Toyota RAV4 against other cars which they drove/owned. Each ranking was based on 9 categories. Here is the summary of top rankings.

The Check Engine, VSC, And 4WD Lights Keep Coming On At The Same Time.

The lights are on in my car. Have had both oxygen sensors replaced. The lights go off for a day, then they come back on. One mechanic said maybe it needs a software update, other said maybe it was ...

Car Cranks Over But Wont Start

cranks over but wont start

17 views with no answers yet

The steering seized up and the car became a tank, with all dash lights on. The shop changed the alternator and it runs fine now, if not a little rough. But I have no high beams. The shop claims thi...