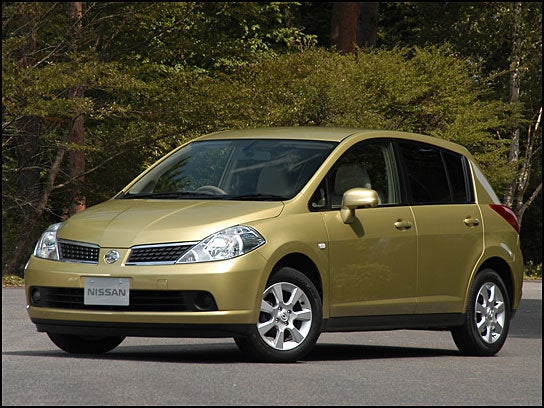 With definite European influences, thanks to its partnership with Renault, Nissan has introduced a new entry-level subcompact, the 2007 Versa. Available in either hatchback or sedan form, the Nissan Versa tries to outdo its competitors (Honda Fit, Volkswagen Yaris) in both size and power. At a foot longer than the Fit, the 2007 Versa can rightly brag about its interior cabin space. Legroom is ample even in the back seat, and headroom has also been expanded. Its 1.8-liter, DOHC I4 hits 122-hp, making it more powerful in numbers than its rivals, though with its heavier weight, not much faster or better at acceleration. The base S and SL trims come standard with a 6-speed manual. A 4-speed auto is optional on the S and a CVT transmission is available with the SL.

Though ABS and traction control are not standard, there are six airbags for improved safety. Even though it's being sold as a budget subcompact, the 2007 Versa packs in a lot of standard features, trying to emphasize that you don't have to sacrifice quality for a low price tag. Air conditioning, tilt steering, intermittent wipers, and a CD player all come on the base model. The SL adds on cruise control, power windows and locks, an MP3 player, and a rear armrest. Satellite radio, Bluetooth, and a sunroof are all optional. While the Versa touts its expanded legroom, the trunk is not particularly large. Seats do fold 60/40 for extended space, but they do not fold flat into the floor.

So far, the 2007 Versa seems to please owners. They praise the spacious cabin, the high fuel economy, and the extra leg and headroom unusual in a subcompact. Power is adequate and about what's expected for an economy car. Drawbacks include noise at high speeds, a rough ride on city roads, the small trunk, and the overly sensitive electronic steering.

Users ranked 2007 Nissan Versa against other cars which they drove/owned. Each ranking was based on 9 categories. Here is the summary of top rankings.

Have you driven a 2007 Nissan Versa?
Rank This Car

2007 versa, 145k miles, oil on engine and around oil plug. No oil is on ground. Last oil changed, the shop overfilled, by a quart. I smell oil while driving. Is this harmful?

How Do I Know Which Is My Transmission?

I can not tell which transmission my car has

Is Used Radiator Worth Getting

I was told my versa has small leak, in radiator. A pressure test was done. i keep putting coolant in the plastic recovery tank. Car has 140k miles. Is it worth getting used radiator, from junk yard,...

I have a 2007 Nissan Tiida which I DNT see a release lever inside the car to open the trunk and there is no button on the key to open it either. I have to open it manually with the key. Am I missing...