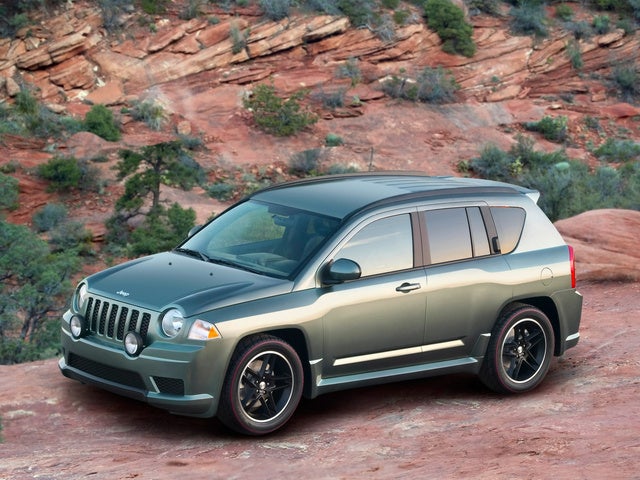 Looking to make a buck in the small-SUV market, Jeep broke into it in 2007 with not one but two vehicles. The Compass is more carlike and less rugged than its fraternal twin, the tougher-looking Patriot. Its maker calls it "The Urban Recreational Vehicle."

Since the Compass was released slightly ahead of the Patriot, it becomes the first front-wheel-drive Jeep. It's based on the Dodge Caliber, and its mission is to combine roominess and safety with fuel economy. It handles the roominess issue, as its cargo space knocks out the so-called cute-ute competition's, but it really makes an impression with safety. Not only is the Compass built with crumple zones, door beams, and an energy-transferring beam beneath the backseat, it also includes driver and front passenger multi-stage air bags with available side-curtain supplemental air bags, ABS, and traction control. There's even a knee bolster for the driver. It achieved a full 5 stars in the NHTSA side-impact crash test.

As for fuel economy, the 172-horsepower, 2.4-liter engine was designed for fuel economy; a 4x2 Compass may be able to achieve 30 highway miles to the gallon. Transmission choices are the 5-speed manual or an optional continuously variable automatic, a very smooth technology that constantly adjusts electronically to deliver what's needed in the driving situation, be it power or cruising efficiency.

Since this is an entry-level vehicle, the interior is unsurpringly plastic-laden. But it has a good number of practical storage spaces for cellphones and what have you, and the armrest on the center console slides to accommodate short and tall drivers alike. The design maximizes space, with the shifter angled out of the front area rather than straight out of the floor.

The list of standard equipment vs. options is a bit peculiar. A buyer must add power windows, air conditioning, and even a cigarette lighter, but fog lamps, airbags, stability and traction control, and a tire-pressure monitoring system are all standard.

Other interesting aspects of the Compass are a vinyl floor in the cargo area that can be hosed out and an interior overhead light that pops out of its holder/recharger for independent use as a flashlight. And here's something else: The speakers in the hatchback can be flipped outward when the hatch is open, directing the tunes in the direction of tailgaters.

And now, to answer the question of whether this Jeep product can leave the pavement: Yes, but it's no Wrangler Rubicon. The available Freedom Drive I 4WD system is superior to what comes on most competing cute-utes in that it includes a lock mode that holds torque distribution to an even split between front and rear axle. The braking system is excellent, and it features a rough-road detection sensor for improved safety on loose surfaces.

That said, the Compass is still intended to ride like a car, and its suspension is thusly tuned. As cute as it may be with its hatchback and its lack of boxiness, it's still a Jeep: The round headlights and seven-slot grille say it loud and proud.

Have you driven a 2007 Jeep Compass?
Rank This Car

Car Just Turned Off While I Was Driving?

While I was driving down the street my car just kinda jerked a couple of times them turned off? I tried right away to start it but it wouldn't start. I waited like 5 mins. Then it started right up...

Dinging Bell What Is It?

I have a 2007 compass when you make a sharp turn and or press on brakes a bell dings. What is it?

My hazard light and heated seats won't work in my 07 Jeep Compass , they are in the same cluster , the signal lights work fine , can anyone help they both quit at same time

my friend has a  2007 Jeep compass he asks me to replace the starter so I did so. after installing the starter. I had to jump start but it started right. but then the battery wasn't holding a charge...