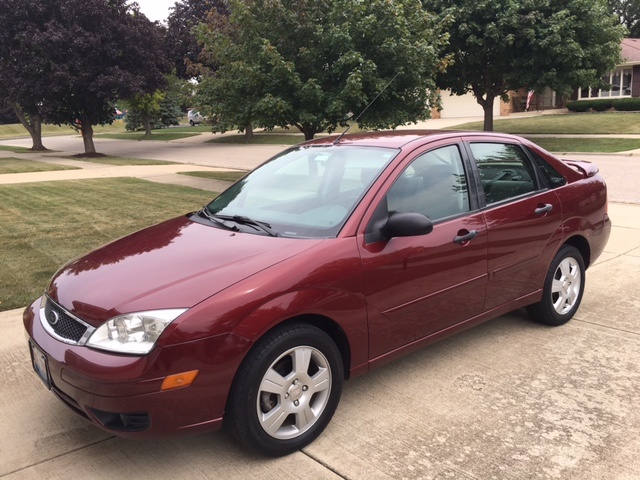 The first-generation Ford Focus continues into 2007 with minimal changes to its winning formula of fun, practicality, and efficiency. New for 2007 in some markets is a special badge that lets people know about its clean-burning engine. 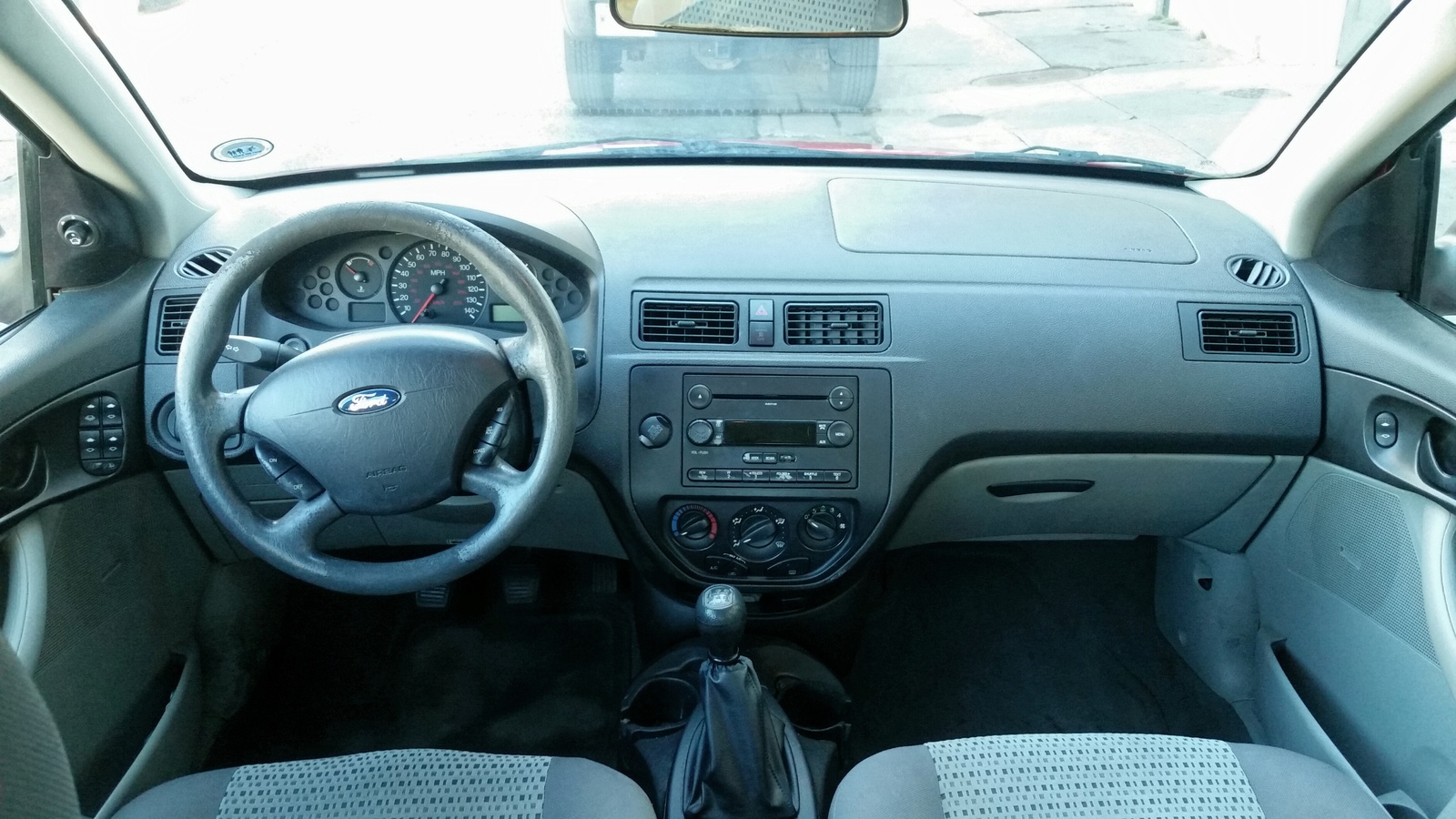 The Focus has a very modern feel to its exterior design compared to the dumpy Ford Escort from the 1990s. The once-triangular headlights have been reshaped since the 2005 refresh. The sloping roof and high-mount taillights are special touches on the 2-door ZX3 and 4-door ZX5 hatchbacks. The ZX4 sedan and ZX5 wagon are plainer, except the ZX4 ST, which can be ordered with the Street Performance Package's tall rear wing and other bumper, grille, and fender mods. Only 2007 Focus models sold in California wear the "PZEV" badge on the trunk, which signifies compliance with the state's Partial-Zero Emissions Vehicle program.

The interior is not as exciting as the exterior or to the Focus that Ford sells in Europe. It's a basic, no-frills arrangement.

A 2.0-liter 4-cylinder engine makes 136 horsepower and 133 pound-feet of torque. This is a front-wheel-drive car with a 5-speed manual transmission and optional 4-speed automatic. The ZX4 ST is manual-only and has a 2.3-liter engine with 151 hp and 154 lb-ft. It also comes with a stiffer suspension and unique 16-inch alloy wheels. Some of us miss the former 2004 SVT, which had more power and grip, but this is still way better than most compact sedans.

Every Focus model has a suspension primarily tuned by Ford's European division. It has accurate steering, good control, and impressive ride quality. The independent rear suspension is rare in this class, and it excels at making the car more nimble and reactive while minimizing this layout's inherent intrusion into the cabin space. This alone makes the Focus such a great-handling compact car. If you must choose the automatic transmission, know it can be sluggish to react. The manual, however, has the feel and efficiency that reward you the more miles you drive. 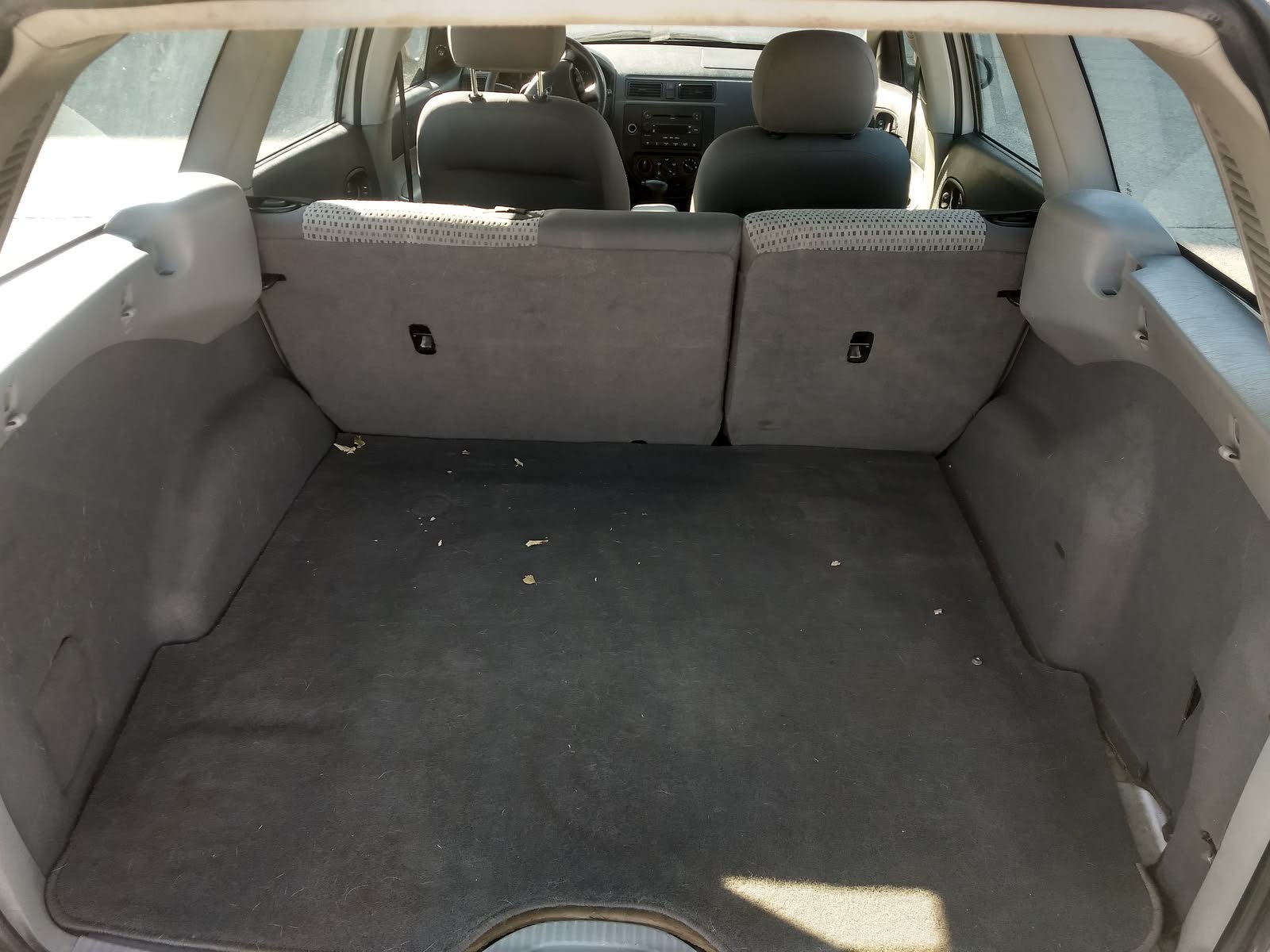 In most small cars, you'll sit low to the floor. But in the Focus, you sit up higher like in a small crossover. Ford calls this "Command Seating." You'll call it easier to enter and exit the vehicle. The driver's seat is firm and supportive. Manual height adjustment comes standard, but a steering wheel that tilts and telescopes does not.

The backseat in the ZX3 and ZX5 hatches isn't a great place for anyone for too long. Choose the ZX4 sedan or ZX5 wagon for more headroom. The wagon rivals the space of a small SUV like the Escape, with 36 cubic feet of space behind the rear seats and 74 cubic feet when folded. Both hatch models have 18 and 40 cubic feet, respectively. The sedan's trunk measures 15 cubic feet and the seats fold for more room.

There are two cupholders in the center console, but the door pockets can't accommodate larger bottles. Place your sunglasses in the overhead console and use the pull-down cubby to the left of the steering wheel for extra storage. Gauges are easy to read and the controls are simple. 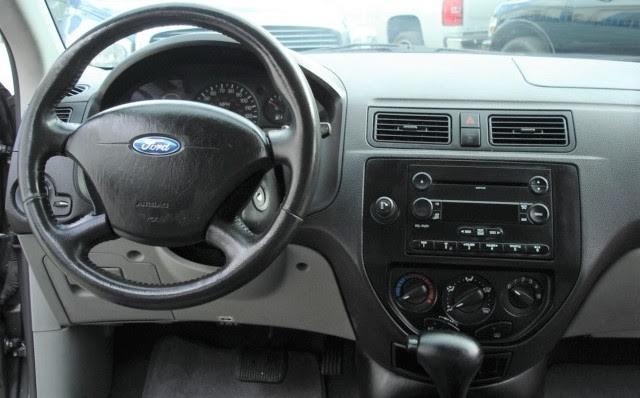 You can buy a really cheap Focus S, but beware how bare-bones it is: crank windows, manual locks, manual mirrors, no keyless entry, no air conditioning. There's a manual seat-height adjustment and a CD stereo included as standard equipment. The SE adds all the basic necessities. The SES brings a tilt/telescoping leather steering wheel with stereo controls, a six-disc CD changer, tachometer, fog lights, and 16-inch alloy wheels instead of the 15-inch steel wheels and plastic hubcaps. The sporty ST adds a trunk-lid spoiler, unique 16-inch alloys, chrome exhaust tip, special rocker panels, heated side mirrors, a leather shift knob, and ST-specific interior trim. These upper trims can also be ordered with leather upholstery, a moonroof, heated front seats, an alarm, and a Sony stereo with a subwoofer. 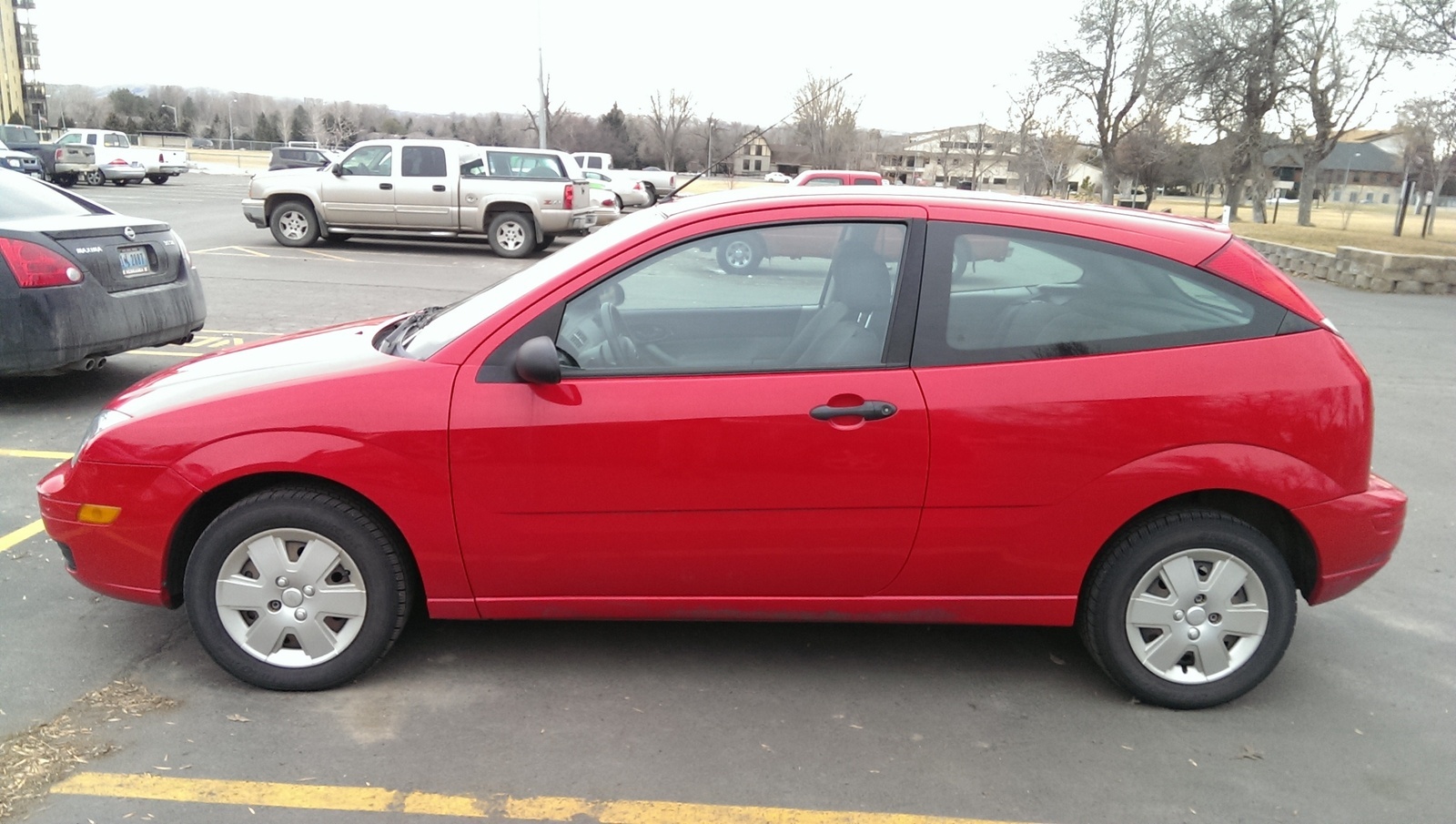 Traction control and anti-lock brakes are unavailable on the base S and optional on all other trims. Front side airbags are optional on all trims. Head curtain airbags, stability control, and rear head restraints are unavailable on all trims. Crash tests could be better. The 2007 Focus scored a Poor in the side-impact test conducted by the Insurance Institute for Highway Safety (IIHS) and three out of five stars for the driver in a similar test by the National Highway Traffic Safety Administration (NHTSA). In frontal crash tests, the Focus hatch scored a lower four-star rating for the driver than the sedan, which scored five. In an IIHS frontal crash test, the Focus sedan scored the top Good. 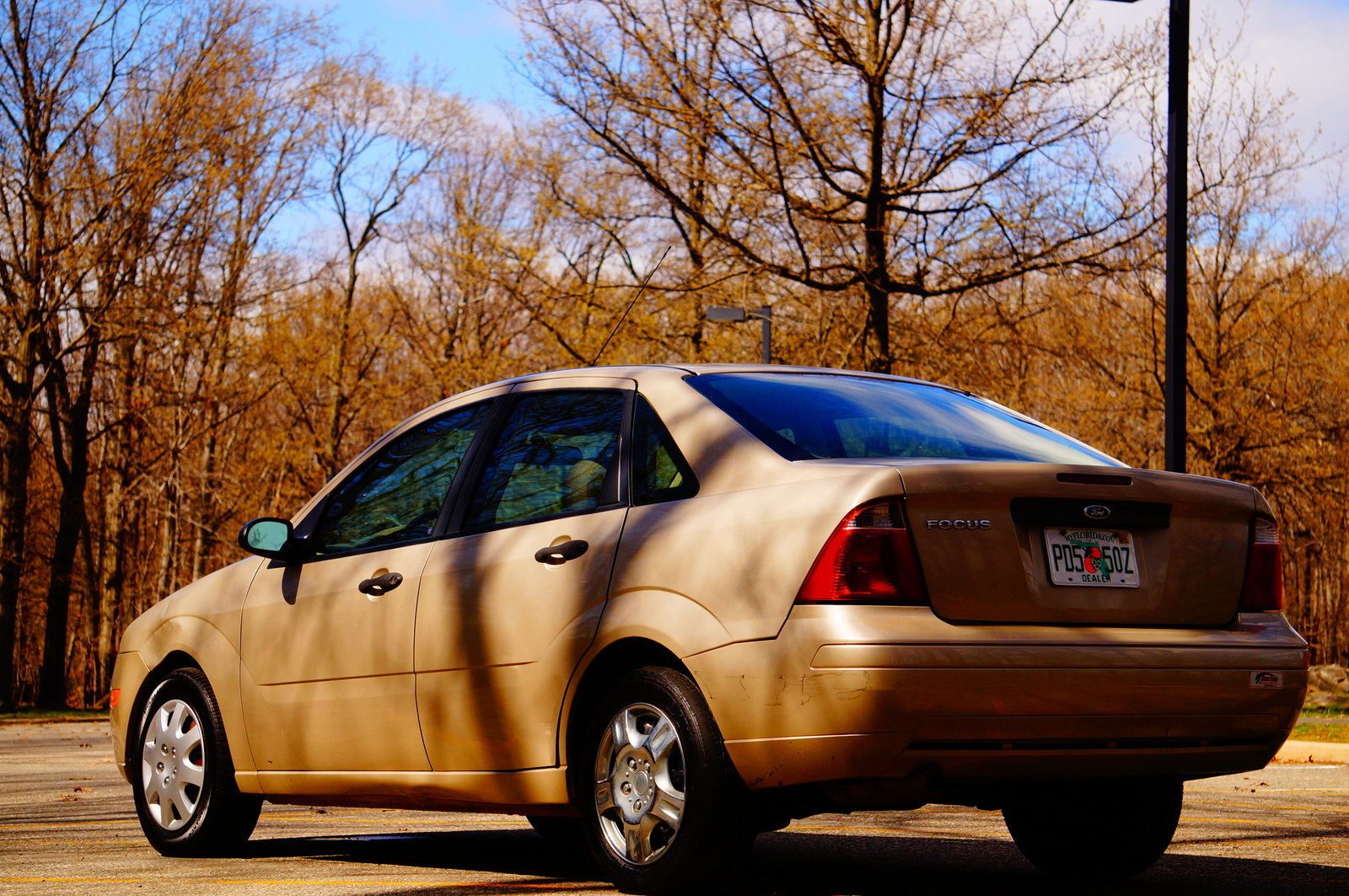 The 2007 Focus starts at $14,130 for a ZX3 S and rises to $18,145 for a ZXW SES. Fuel economy is EPA-estimated at 23 mpg city, 31 mpg highway, and 26 mpg combined for all models with the manual transmission. Automatic models are 22/29/25. The ST is 20/28/23. Do not buy a base S unless you accept that trim's lack of basic safety and convenience features. The SE and SES trims blend style and performance better than most cars in the compact segment, and the ST will satisfy driving enthusiasts.

TheHorror "According to reviews"? Isn't THIS a review? If the author hasn't driven this car, he or she might as well just insert a photo of the monroney and head off to happy hour early.

Have you driven a 2007 Ford Focus?
Rank This Car

Regarding Car Engine And Transmission

I have a Ford Focus engine with low miles and transmission in good shape, what car models or makes would it fit in to? I don't have a picture of the engine, the car is sitting in my yard. and I d...

My 2007 Ford Focus SE has been running great but all of a sudden it makes this audible clicking noise while I'm driving and the lights flicker with each click. The battery light then comes on, then ...

Has Anyone Had Brake Problems With This Car?

Such as pedal to the floor and no brakes.

Radio stopped working. Fuses are good. Clock will work and display when "Menu" is pressed. No other display. Will not turn on. Does not seem to have any power at ratio connector power pin.

How Do I Put My Fuse Box Back Together Wires And All?

I took it apart cuz I've been tracing an electricial problem and found out that the light tester I was using was bad so I had to start all over and decided to start from the battery I need a wiring...