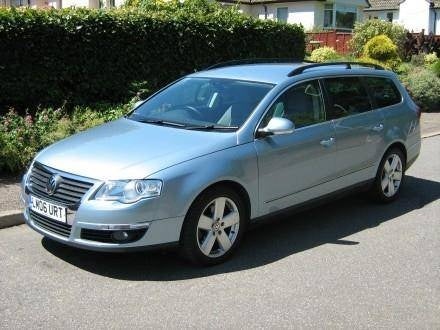 With a re-envisioned chrome grille and front end, a sweeping new style from end to end, and an elegant new interior the represents the best of the breed, the Volkswagen Passat sought to take on all mid-size competitors for 2006 by offering a perfect balance of luxury, power, and contemporary styling.

While the most noticeable changes for the 2006 Passat were on the outside, the real story starts under the hood, with an all-new 2.0-liter turbocharged 4-cylinder engine that pumped out 200 hp. It was dropped into two new Passat trim packages for 2006, the Value Edition and the 2.0T, and matched with a six-speed manual overdrive transmission, which was standard; a six-speed automatic was available as an option.

Volkswagen also offered a 3.6-liter, 280-hp V6 engine, which was standard on the high-end Passat 3.6L trim package. The six-speed automatic transmission was also standard with this package, and VW's 4MOTION all-wheel-drive system was available as an option.

Overall, the 2006 Passat was three inches longer and three inches wider than the previous year's model. And into that longer, wider body Volkswagen packed a long list of standard features, including
air conditioning, power windows, power door locks, cruise control, a telescoping and tilt steering wheel, a trip computer, and an audio system with a CD player and MP3 capability. Safety features included traction control, stability control, an anti-lock braking system, an anti-theft system, and front, side, and side curtain airbags.

The 3.6L package added even more, including a power sunroof and a CD changer. Options included a leather steering wheel, a navigation system, heated seats, and power-adjusted seats.

The refinements and additions to the 2006 Passat did not escape the notice of drivers, many of whom were impressed not only with the car's interior appointments but also its handling, suspension, comfort, and styling. Minor problems were noted with the electrical system by some drivers, but other than that drivers voiced few complaints about the car.

What's your take on the 2006 Volkswagen Passat?

Hutch1513 I like big cars which is why I drive a Chrysler 300c. My 2nd car is a 2006 VW Passat that I also love. It feels big and roomy on the inside while being smaller on the outside. It has plenty of pep and is very nicely optioned. It drives well, is comfortable to drive, and brakes well. I am 6-1 and have plenty of room. I maintain this car well and have no need for a newer passat. The car is now 14 years old with 102 thousand miles and is still a keeper. I use an auto shop in the area and save big time over going to a dealer for maintenance.

Users ranked 2006 Volkswagen Passat against other cars which they drove/owned. Each ranking was based on 9 categories. Here is the summary of top rankings.

Have you driven a 2006 Volkswagen Passat?
Rank This Car

Theyralllies75 asked a 2006 Volkswagen Passat 2.0T Car Selling & Trading In question about a week ago

I would like to update my credit card so that I can upgrade my listing. How do I do that?

0 views with no answers yet
20

Guru9B7RFB asked a 2006 Volkswagen Passat 2.0T General question about a year ago

Where is the power steering reservoir on the 2006 volkswagon passat

Thomas asked a 2006 Volkswagen Passat 3.6L Maintenance & Repair question about a year ago

Why Is My Passat Stuck In Reverse?

My VW Passat is stuck in reverse. Before that the car was having a heck of a time switching between 2nd and 3rd gear. A few people I asked about it told me it "might" just need the tranny fluid flus...

Hi , so I can get my car running but it has no power and the epc light is on constantly. There are some codes for the engine all having to do with electrical . Also a couple times my code reader w...