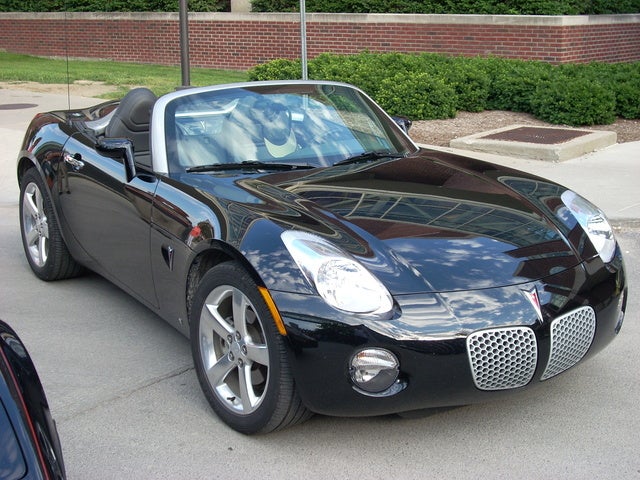 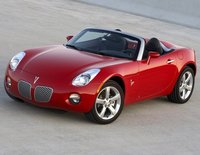 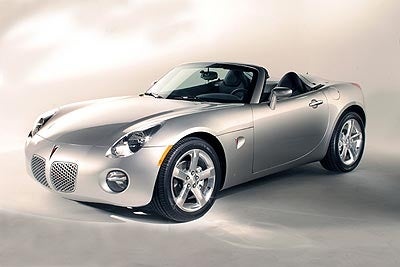 Pontiac's first true sports car, the 2006 Solstice is strong on style and appearance if not so much on performance. There's no denying this is a sleek, sexy, curvaceous model that will make grown men and women drool just to get close to it. Built on GM's new Kappa platform, the two-door convertible is longer and wider than its closest competitor, the Miata. The pushed-out wheels give it a lower, meaner stance, with more stability on the road.

The 2006 Pontiac Solstice, however, comes with a 2.4-liter, DOHC Ecotec I4 engine that gets 177 hp, which is pleasantly fast and responsive, but not quite road-burning material. A 5-speed manual is standard, and a 5-speed automatic optional. It also comes with few standard features, to keep the weight of the car as light as possible. Air conditioning, ABS brakes, and power locks and windows are all optional. Trunk space is pretty much non-existent, especially when the soft top is folded into it. The dashboard is folded around the driver, with deeply inset gauges lit red at night.

The selling point for the 2006 Solstice is its neck-straining, head-turning looks. Along with its smooth curves, both the hood and trunk lids open outward rather than toward the car. GM wanted to build a sports convertible that hearkened back to classic roadsters, and on looks alone, the Solstice is a hit.

Owners love the looks, overwhelmingly saying it is a "chick magnet." Good gas mileage (20/28), a low price tag, and road-gripping cornering and handling make this a fun affordable sports car, just as long as you don't expect to win any drag races. But there seem to be lots of features that GM still has to work out. The top is manually raised and lowered, which can be cumbersome and slow. The lack of trunk space means there is no spare tire, only a can of sealant and an air compressor. Storage compartments do not exist. The gauges seem too deep to read sometimes, and visibility and headroom are quite limited with the top up (thanks to a tiny rear window and poorly designed mirrors). Drivers desperately wish for more horsepower as well. But in a society that often values style over substance, the 2006 Solstice is a big winner.

What's your take on the 2006 Pontiac Solstice?

Guru1DM33 Wow I can’t aay enough love my Solstice. They are quick turns barely moving the steering and just an amazing fun car.

Have you driven a 2006 Pontiac Solstice?
Rank This Car

Got to end of selling information then wanted to charge after saying on website selll your car free.

I Want To Buy From A Private Party

I am getting the P0690 in my pontiac solstice.I don't know the location of the relay and how to fix that.

451 views with 6 answers (last answer about a year ago)

Where Is The Heater Blower Resistor Located On My Wife's 2006 Pontiac Solst...

I have the new part in hand, looking for where it is at

Out Of State Car Purchade

Is there a way to arrange to have a vehicle shipped to me once i buy it?