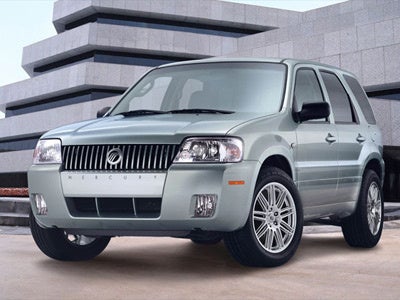 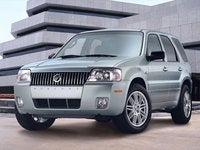 Mercury continues its compact SUV line with the 2006 Mariner. Based on the same platform as the Ford Escape and the Mazda Tribute, similarities between them end there with Mercury's interpretation of the compact SUV.

For short trips, the Mariner provides adequate seating for five, but most reviewers reported the seats uncomfortable for extended travel. Yet passengers have plenty of room, and this compact SUV offers generous cargo space along with many storage bins. The back seat has a 60/40 split, and while not comfortable for long trips, it comes equipped with three individual three-point safety belts and adjustable head restraints.

New for 2006, Mercury offers a "Moon and Tune" package that features a power moonroof and an AM/FM audio system with satellite radio and 6-disc in-dash CD changer. Some new colors are also available. Standard safety features include dual two-stage frontal airbags, ABS with Brake Assist, and lower anchors and tethers for children. Seat-mounted side-impact and side curtain airbags and a reverse sensing system are options.

The base Mariner comes with an inline-4 engine, FWD configuration, with a V6 and 4WD optional. Most reviewers found the four-cylinder engine "adequate," but preferred the V6's extra power. Both engines are noisy in their upper ranges. The Mariner's interior offers a quieter ride than its Escape cousin, but mirror wind noise does intrude around 60 mph.

Overall, the Mariner represents an upscale, sportier version of the Escape. Reviewers liked its handling - a bit more compliant than its cousins - and its stylish exterior and interior.

What's your take on the 2006 Mercury Mariner?

Have you driven a 2006 Mercury Mariner?
Rank This Car

What Is Expected Engine Life Of 3.0L Dohc Engine In Mercury Mariner? Decent...

Engine Swapping What I Can And What I Can't Get Away With 3 L V6 Duratec ...

Engine swap but specifically for performance is there a 3 l turbo or a supercharged kit or does it have to be a 3 l duratec engine v6 can I boost it up to like a 3.5 this is my first time modding a...

how do I bypass the AC compressor/ AC clutch with a shorter serpentine belt on a 2006 Mercury Mariner Premier v6 3.0L? how long should the new belt be?

D.l. asked a 2006 Mercury Mariner Luxury Maintenance & Repair question about a year ago

How To Change Fuel Pump?

How do you change fuel pump for Mercury mariner 06?