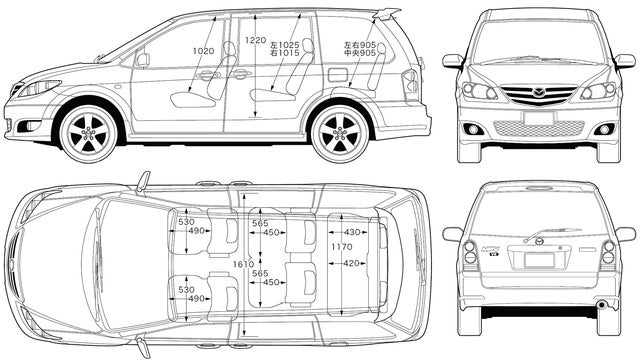 Average user score
4.7 ⁄ 5 stars
Based on 3 reviews
Low Maintanance, Good On Fuel by David — Could use a little more powerwise, but you can only go 100kph anyhow. Auto side doors don't work well in winter months and have no real good over ride. seating area is put together well and is very co... Read more
Buy It, Keep It Maintained And It Will Make You Happy. by Paul — Great vehicle in the 2006, I believe its the last year they sold it in Canada? Correct me if I am wrong. Good gas mileage and I like that's it is a bit smaller than the big domestic vans. Overall real... Read more
Great Family Car by Christopher — It is a great vehicle for a family who wants lots of space without sacrificing handling and performance. It has served us reliably for 3 years so far with only minor repairs needed over that time. I w... Read more

Fans of the Mazda MPV noted that it was a true minivan in an era when many passenger vans could more accurately have been described as maxivans. And, in fact, Mazda touted exactly that fact, noting that the MPV was small yet versatile, with changeable second- and third-row seats, so it can carry either passengers or cargo. According to Mazda, the MPV was also nimble, easy to park, lighter in weight than its competitors, and sporty, with five-spoke alloy wheels, fender flares, and low-profile headlights.
New colors, including Brilliant Black, Bronze Metal, and Galaxy Gray, were available for 2006. Three trim packages were available. The entry-level LX-SV came with CFC-free air conditioning, power windows and door locks, a six-speaker AM/FM/CD stereo system, dual-front airbags, 15-inch wheels, and four-wheel disc brakes with the anti-lock braking system.
The LX package included 16-inch wheels, a front underspoiler, a rear underskirt, and an expanded list of options, including an All-Sport options package, an LX Plus package, and a towing package.
The upscale ES version added dual power sliding rear doors, leather seats, side-impact airbags, fog lamps, and traction control.
All versions were powered by a 200-horsepower, 3.0-liter V6 engine, which was linked to a five-speed automatic transmission.
Many drivers noted that although the MPV was nimble, attractive, and versatile, it didn't offer as many features and options as some of its competitors. On the plus side, drivers liked the MPV's value, and considered it a good option for families who couldn't afford higher-priced minivans.

Have you driven a 2006 Mazda MPV?
Rank This Car

need to know which other mazda parts can interchange on the 06 awd mpv..3rd gen..LY ..I don't see it in the trim section when searching

What Could Be Wrong With My Motor?

My 2006 Mazda MVP lost all power, died going down the highway. Motor has no compression now. What could it be?

Power loss and noise,sounds like coming from around muffler system

Check engine light came on couple months ago stated was time to change spark plugs and coil packs. Was able to do front 3 with coil packs. But they looked perfectly fine. Had to wait about 2 weeks...

This Is Just A Test Question