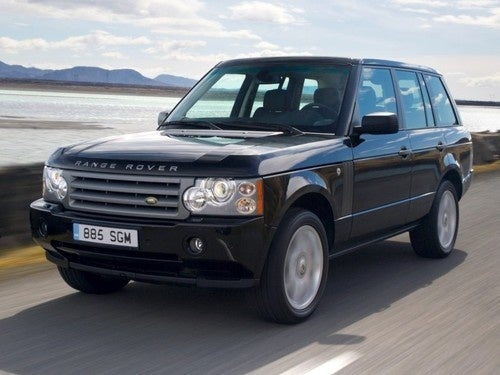 The Range Rover has been updated and revised again for 2006. New trims, power plants and features debut this year. The luxury SUV also receives a light face lift, which brings a redesigned grille, new wheel styles, and altered side vents. Headlights and taillights have also been changed. The Range Rover is also now available with a rear backup camera and adaptive headlights.

There are now two Range Rover styles: the HSE and the Supercharged. The sole BMW-engineered engine has been replaced with two new choices from Jaguar. The HSE is powered by a 4.4 liter V-8, which generates 305 horsepower and 325 pound-feet of torque. The new Supercharged model houses a 4.2 liter V-8, which is supercharged for a total output of 400 horsepower and 420 pound-feet of torque. Both engines are mated with a six-speed automatic transmission with a manual shift gate. The Range Rover's maximum towing capacity remains at 7700 pounds, but efficiency has improved with the new engines. The HSE's fuel economy is estimated at 14/18 mpg, and the Supercharged is rated at 13/18 mpg.

The HSE is the more affordable of the two styles, priced more than $12,000 less than the Supercharged. The upper level model comes equipped with the more powerful engine and a few additional features which are optional on the HSE. Options for both models include a rear seat DVD entertainment system with a six-disc DVD changer, 16-way power seats, a heated steering wheel and rear seats, and upgraded leather.

Reviewers and owners agree that the Range Rover offers a superb driving experience both on and off road. There has been much acclaim for the advanced 4x4 technologies like height adjustable suspension, descent control, and an informational driver interface through the navigation screen. On the road, many have commented that the Range Rover rides like a luxury sedan, and a new window design has further dampened road and wind noise. Several minor engineering, electrical and mechanical problems continue to mar the overall Range Rover experience for some, but many report no issues. Complaints are often directed at the warning lights, navigation system, and some difficult-to-operate controls.

What's your take on the 2006 Land Rover Range Rover?

5jhk7me A wonderful classic SUV it is.

Users ranked 2006 Land Rover Range Rover against other cars which they drove/owned. Each ranking was based on 9 categories. Here is the summary of top rankings.

Have you driven a 2006 Land Rover Range Rover?
Rank This Car

My 2006 L322 TDV8 consistently goes into limp mode after 8-10 miles of normal driving. If I pull over, turn off and restart it is then fine for another 8-10 miles. If I drive very carefully (ie keep...

558 views with 2 answers (last answer about a year ago)

I Saw A Car On Your Site...can You Tell Me If You Can Find It?

Could This Be A Bad Air Compressor?

So for a little while now my 2006 Range Rover supercharged has had a suspension fault come across the dash. But a few days ago as I was driving the suspension completely dropped. The lights on the...

227 views with 4 answers (last answer about a year ago)

I lost only key to 2006 LandRover Supercharge. The car is in super lock. I had a new key made. The new key will not work. What do I do?