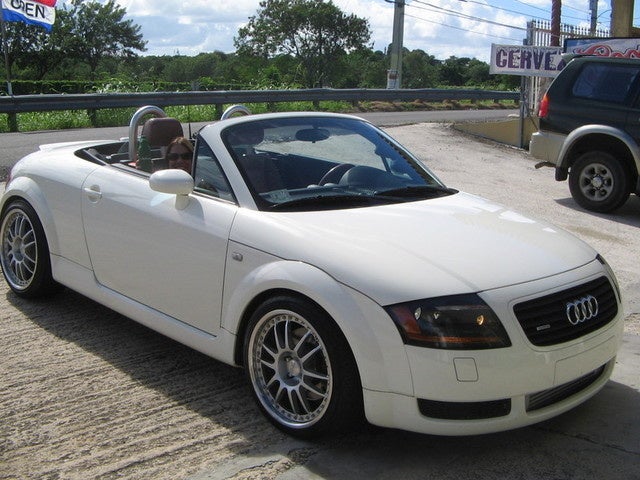 Some called it a chopped Beetle. Audi described the look as a "low fastback greenhouse." Whatever the terminology, the Audi TT revolutionized car design, and its curves and hunkered-down bubble look continues to influence automakers. Ending its first generation, the 2006 Audi TT remains unchanged for this year. The most notable offering is a Special Edition (SE) version of the 3.2-liter, 250-hp turbo V6 with two-tone wheels. To commemorate the 99th anniversary of the Tourist Trophy race that gave the TT its name, only 99 Coupes and 99 Roadsters will be sold.

Engine choices for both Coupe and Roadster are either the base model 4-cylinder, 1.8T, 180-hp with 6-speed Tiptronic, or the tweaked 1.8T at 225-hp and 6-speed manual transmission. For more power and better road performance, there is the 3.2 V6, paired with Audi's DSG transmission that claims to offer smooth and more streamlined shifting. Quattro AWD technology comes only with the 225 and 250-hp engines. All models come standard with ABS brakes, traction control, electronic stability program, and dual front airbags. The sturdy chassis is built to prevent rollovers. As with all Audis, the interior is laid out conveniently and with all the comforts of the driver in mind.

The 2006 TT is a sporty car, but not necessarily a sports car. Though it enjoys high speeds, it is also heavy, due to the quattro system, and this extra weight is noticeable compared to comparable cars in its luxury class. For this reason, the 3.2 V6 is a clear winner with 2006 TT owners, who like the extra power and the smoothness of the DSG. As always, the TT ranks high on handling, cornering, and AWD quattro action. Owners love the surprising amount of trunk space in the Coupe, especially with the unfit-for-human-use rear seats folded down. The overall comfort and ergonomics of the interior get high marks. On the opposite side, owners complain about turbo lag in the I4 engines, the cramped backseat, and a premature need for a timing belt replacement.

Why Is There No Donut Or Spare Tire In Trunk?

my son's tire blew. He wanted to change tire, but found out car does not come with a "donut" He is very distressed. After spending over $30,000 for used car, he cannot understand why there is no sp...

Gas Mileage For The Audi TT Quattro 3.2 V6 With DSG?

When Should The Timing Belt Be Changed

I Have An S-line. What Is The Difference? I Can't Seem To Get A Straight An...