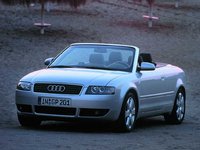 A small luxury sedan that's short on space but big on premium feel. 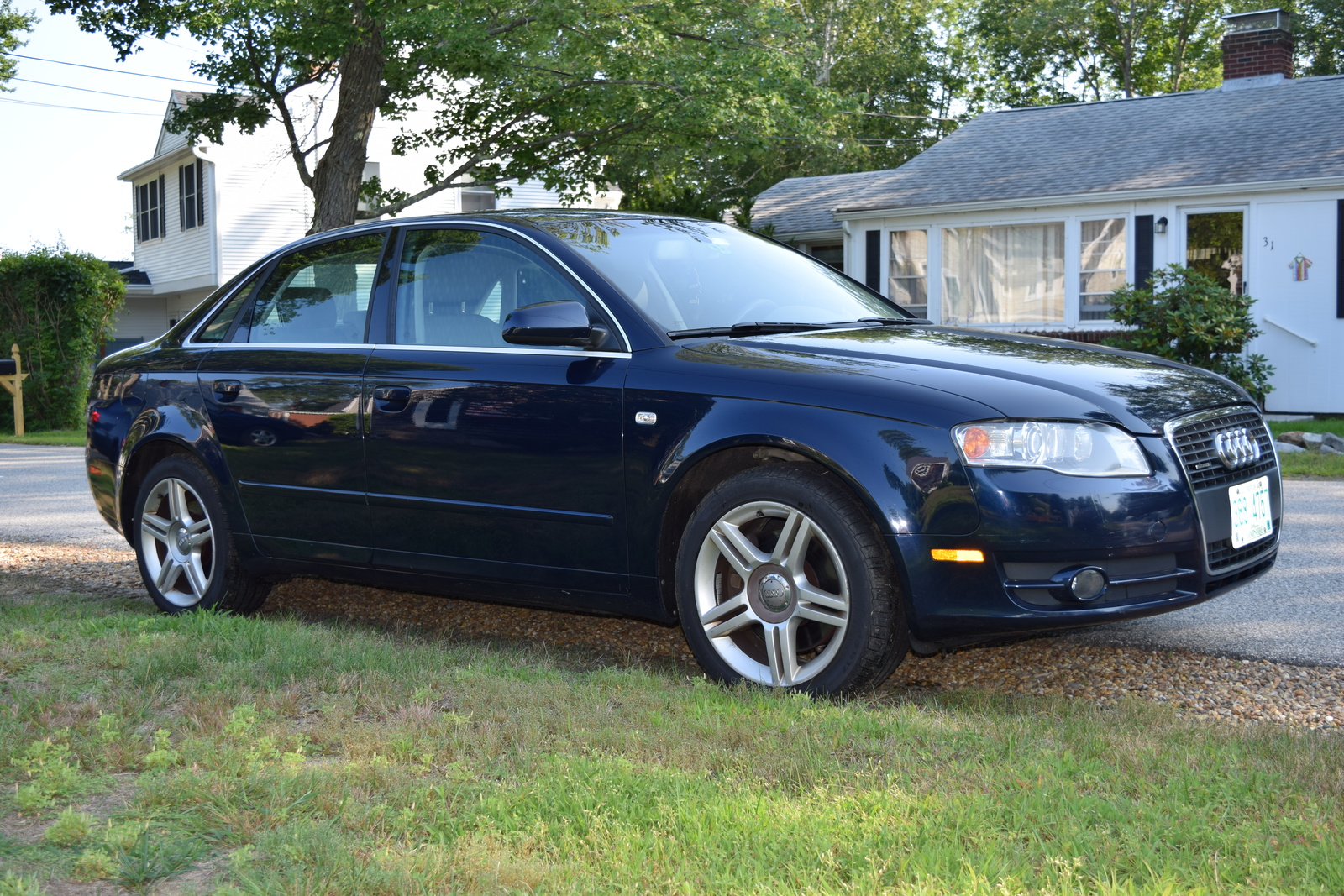 The B7-generation Audi A4 is new for 2006 with more performance, amenities, and big-grille styling. Though it's really a refresh of the 2001 A4 is no demerit. Available in sedan, wagon, or convertible form, there are enough changes that make Audi's compact feel like a much more livable and likable luxury car. 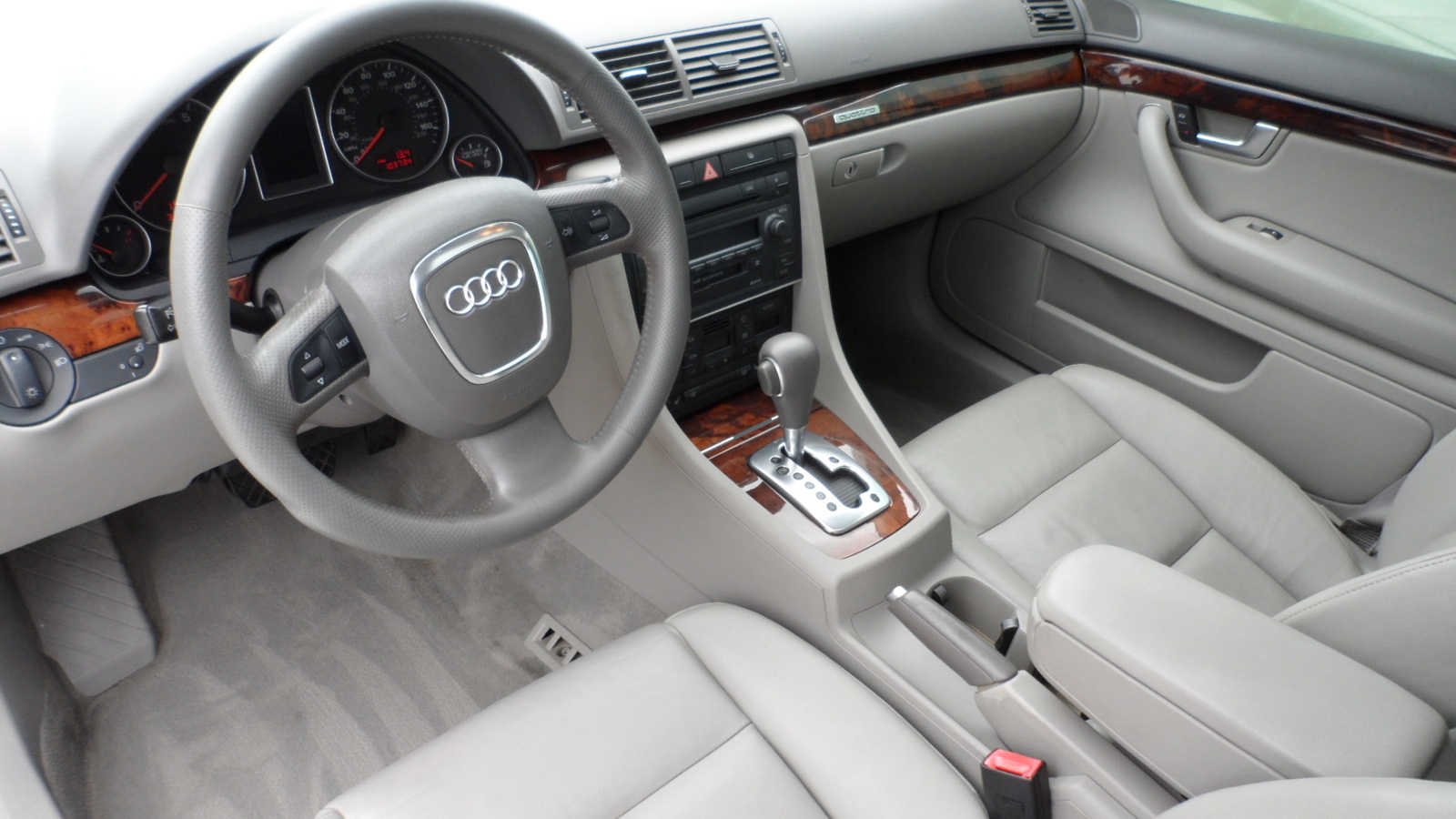 The tall grille is the A4's most prominent exterior feature, as it's at least twice the size of last year's grille. The look matches the larger A6 and is certainly a trend-setting nose on an otherwise simple, nondescript body. The headlights, instead of being perfectly rectilinear like the rest of the car, have a downward kink once past the turn signals. A hard shoulder line runs from nose to tail just above the door handles, and now the taillights are widened across the trunk lid, where before they were small cubes pushed to each edge. The car is 1.6 inches longer, overall. A new S-line trim comes with 18-inch wheels, and a sport package comes with a lower suspension. An Avant station wagon is also available. The A4 is handsome, just as it's always been, but borders on boring (except for the soft-top cabriolet, which I'll admit is on its California beach vibe). If you're looking for a flashier luxury car, head to your BMW or Mercedes dealer.

The interior is entirely carryover from the previous model year, save for a wide aluminum trim piece that extends the width of the dashboard, and a new center console that incorporates a pair of cupholders and an extra power outlet. Materials are first-rate, and the fit is excellent. The A4 feels like a more expensive car from the moment you sit down, though for $35,000 and lots of parts shared with Volkswagen models, it had better be. 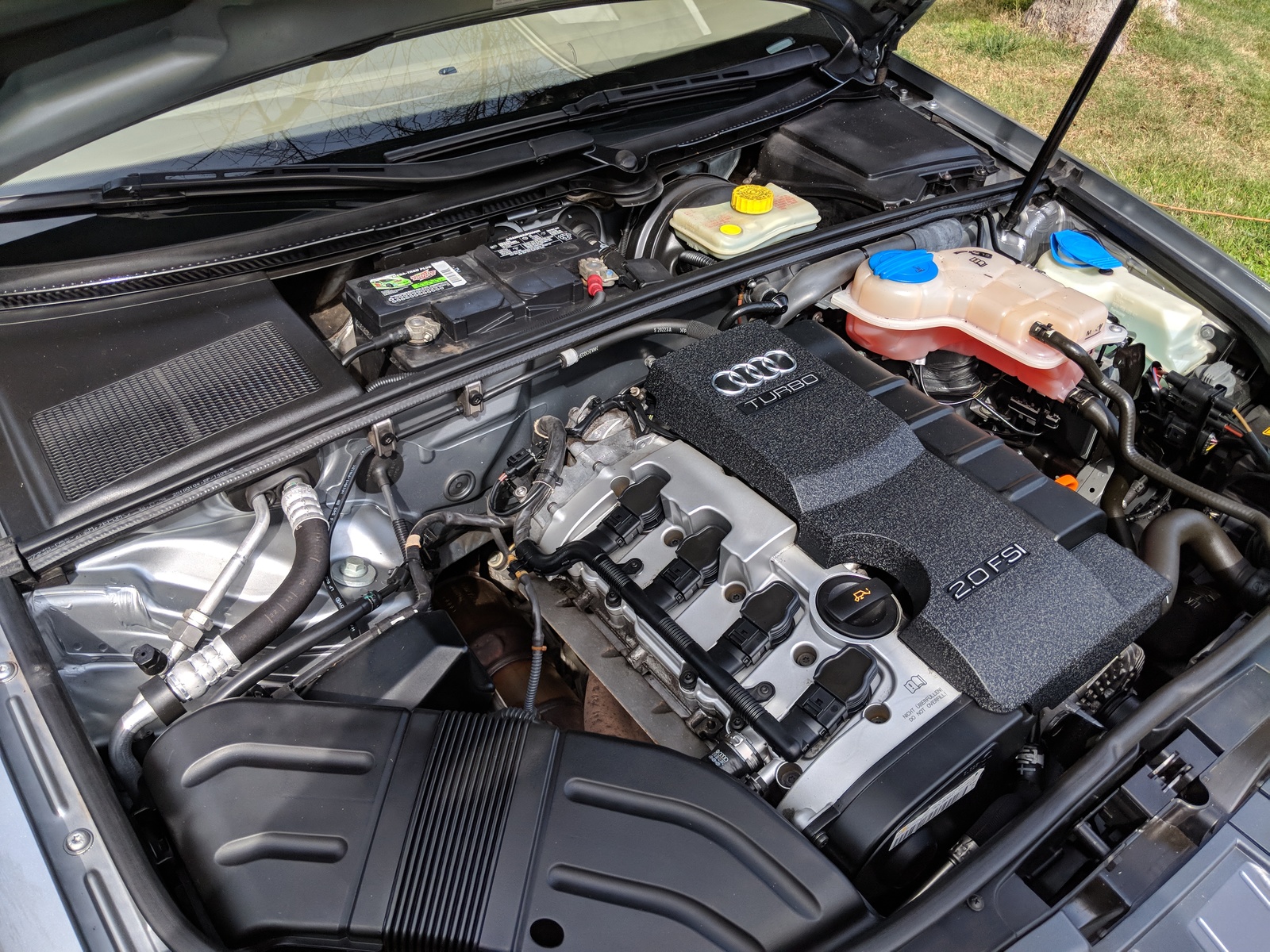 Replacing the 1.8-liter turbocharged inline-4 is a new 2.0-liter version with direct injection, which sprays a highly-pressurized gasoline stream directly into the engine's combustion chamber instead of the intake. The result is greater power and efficiency. The 2.0T makes 197 horsepower and 207 pound-feet of torque, sent through a slick-shifting 6-speed manual (one gear more than 2005), a 6-speed automatic, or continuously variable transmission (CVT).

Front-wheel drive (FWD) is standard on the 2.0T and pairs with the optional CVT. That's an OK setup, but it's quite plebian for a luxury car (the BMW 3 Series and Mercedes-Benz C-Class are rear-wheel drive (RWD) with real gears for better balance and performance). Upgrade to Quattro all-wheel drive (AWD), and you'll see why Audi won rally races all throughout the 1980s and 1990s. It's a very strong and fast-reacting system that transforms the A4's handling and replaces the CVT with the 6-speed automatic that offers manual gear selection. Driving the 2.0T Quattro, especially with the manual, is lots of fun. It has such strong acceleration and a well-mannered sound that you may not miss the optional 3.1-liter V6, which comes with 252 hp and 243 lb-ft. The cabriolet limits the powertrain choices and carries over last year's engines, though it's pretty cool to get AWD in a convertible. 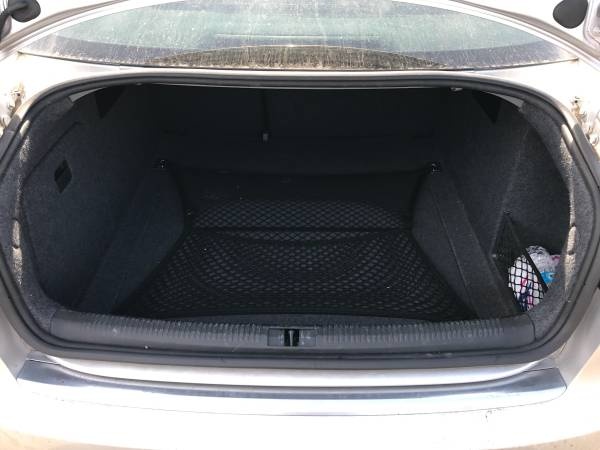 Cupholders are a big deal for a German car in 2006. Finally—and only for the U.S. market—the A4 comes with a pair next to the handbrake lever. They're recessed into the console and not the flimsy, pop-out devices that you'll see on a lot of other European cars. Else, the A4 is as straightforward as it gets, with easy to use controls and legible readouts that glow red at night.

The backseat is tight for the heads and legs of average bodies, so forget about transporting tall people. Trunk space is also small, at 13 cubic feet (and just nine in the cabriolet). The Avant wagon solves the space problem, with 28 cubic feet behind the rear seats and 59 cubic feet when folded. 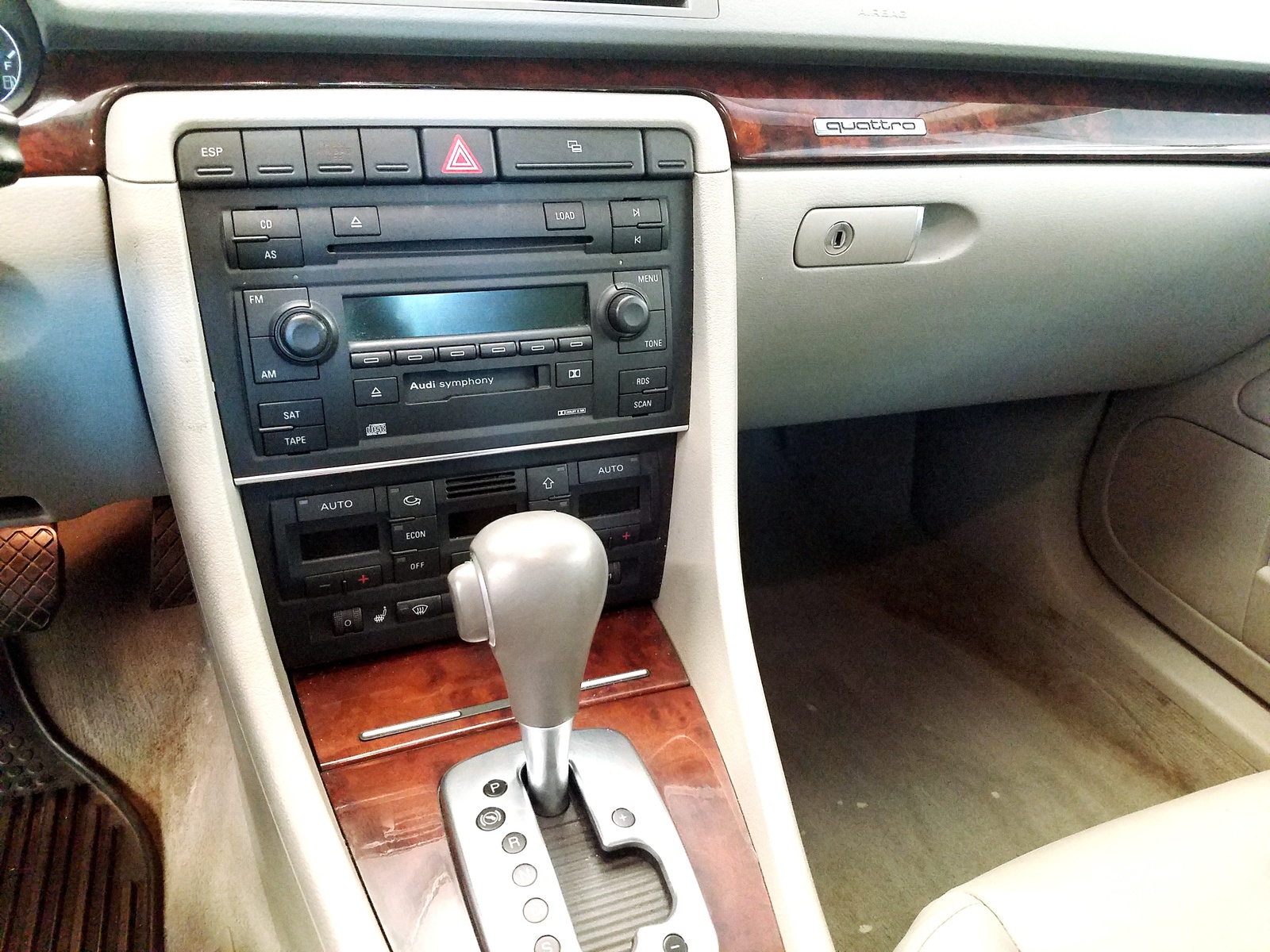 The A4 comes standard with dual-zone climate, aluminum trim, manual cloth seats, power windows and mirrors, and a six-disc CD changer. Power leather seats are standard on V6 models and optional on the 2.0T. More tech options include a Bose stereo prewired for satellite radio, navigation, Bluetooth phone connectivity, a sport package with a lowered suspension, and xenon headlights that can swivel 15 degrees with the steering wheel. 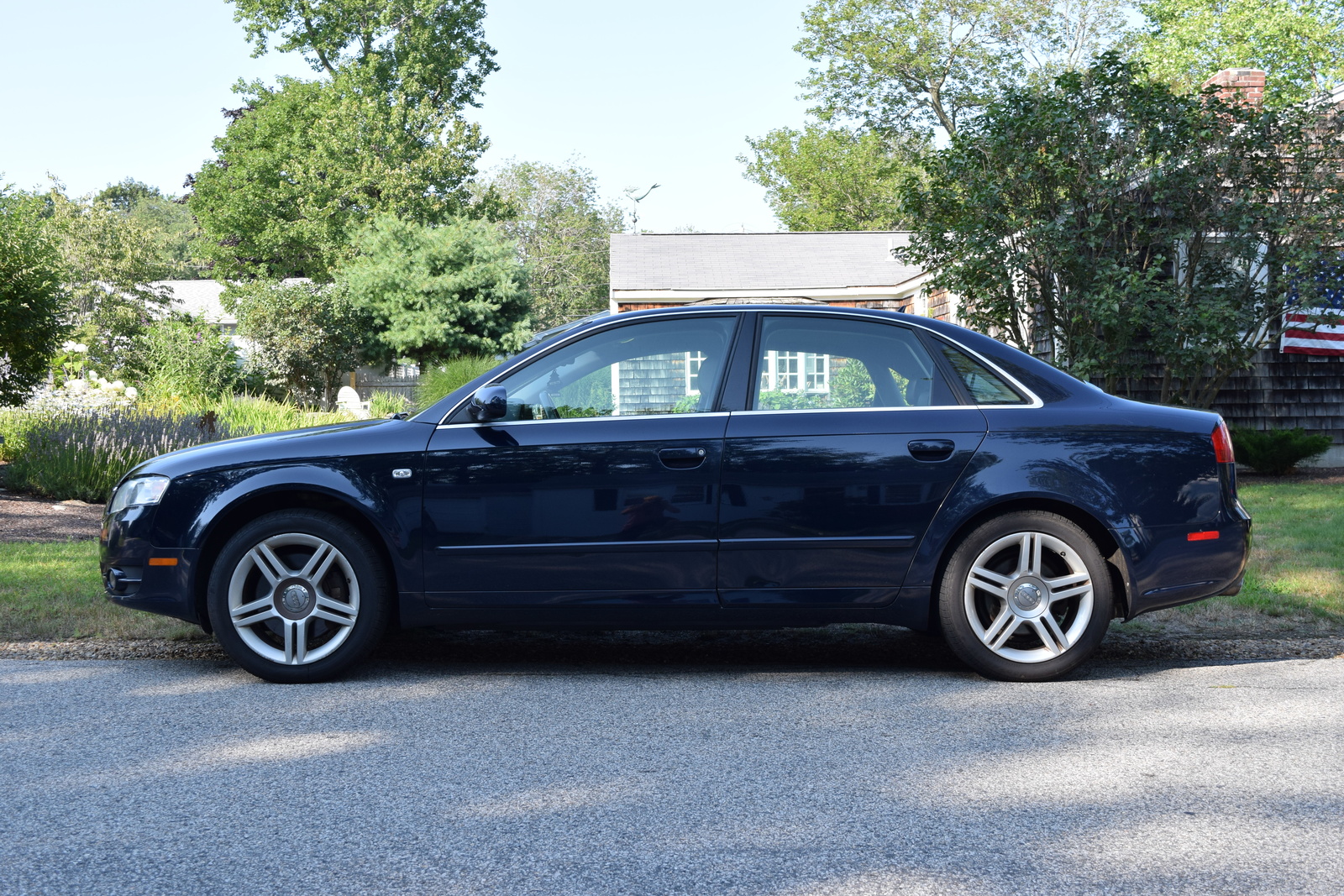 The 2006 A4 comes with dual front airbags, front side airbags, and front and rear head curtain airbags as standard. ABS, traction and stability control come standard, too. All seatbelts have pre-tensioners that tighten during a crash. Rear side airbags and a tire pressure monitoring system are optional. The A4 is a 2006 Top Safety Pick by the Insurance Institute for Highway Safety and scored the best "good" rating in the side and moderate overlap front crash tests. The National Highway Traffic Safety Administration rated the A4 four out of five stars for front and side crash tests, except for the driver in the side test which received the full five stars. The 2006 A4 came with Takata airbags that can explode during a crash and kill the front occupants, so be sure to verify the vehicle has received the recall repair. 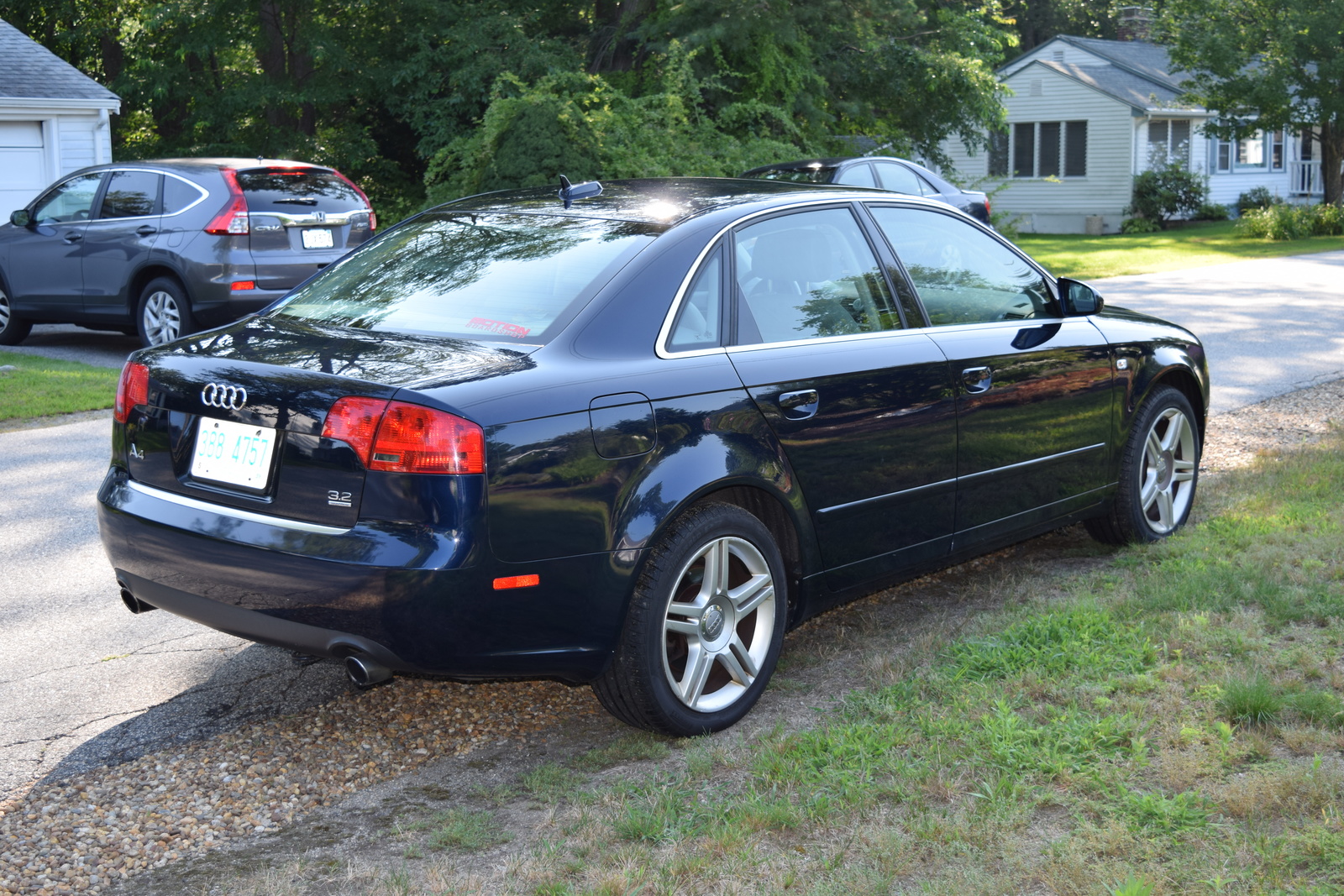 The 2006 A4 starts at $28,960 for the 2.0T sedan and commands $46,210 for the 3.0 Quattro convertible. Fuel economy estimates range from 15-20 mpg city and 23-31 mpg highway, depending on the powertrain and body style. This is an expensive little car, and the repairs necessary on its direct-injection engines may be very troublesome for secondhand owners. But the A4's style and driving performance make it a good choice in this segment.

russ77_usa Great Car , fun to drive , best AWD out there

Users ranked 2006 Audi A4 against other cars which they drove/owned. Each ranking was based on 9 categories. Here is the summary of top rankings.

Did My Mechanic Break My Rack Pinion?

Can replacing a power steering pump break the break a rack pinion? I got my pump replaced from a mechanic and a week later my steering was very stiff when driving at low speed and the mechanic said ...

I need to replace the engine for my Audi and somebody mentioned I could buy a Volkswagen engine (essentially the same thing) from a parts yard and use the stock turbo on my old engine instead of b...

Is This Audi Available 2006