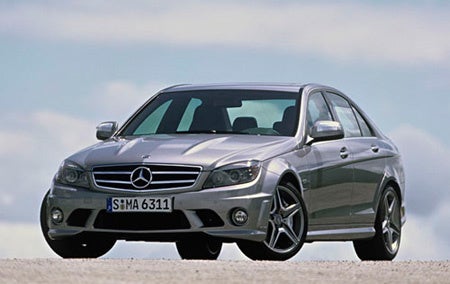 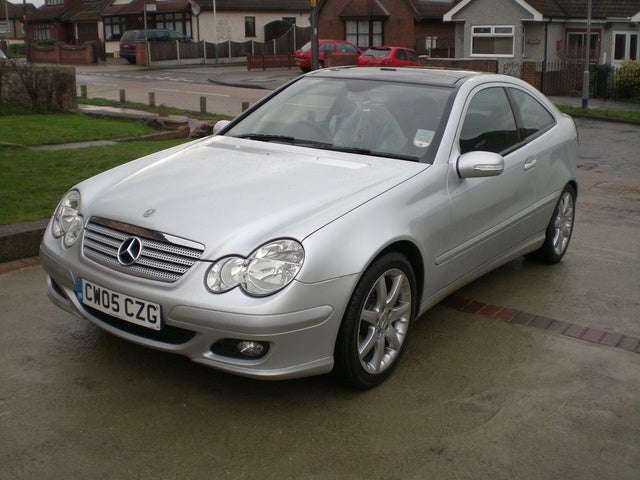 The 2005 C-Class lineup receives an exterior styling refresh, and interior changes include a new dash, redesigned seats and some subtle trim enhancements. A new audio system with six speakers and a CD player is now standard in all models. The C320 wagon has also been dropped for 2005.

Other changes include an improved short-throw six-speed manual transmission and a new suspension system. A DVD-based navigation system is now optional, but the Mercedes service program has been discontinued.

There are nine trim levels in the 2005 C-Class lineup. A tenth variant, the C55, gets its own model designation due to AMG enhancements. All models come standard with a leather-wrapped steering wheel, cruise control, dual-zone automatic climate controls, an interior air filter, heated power mirrors, power windows, power door locks, remote keyless entry, a CD player, and a trip computer.

The C230 Sport Coupe is the entry point, housing a supercharged 1.8 liter inline four. This engine provides 189 horsepower, and is also found in the C230 Sport Sedan. The second tier C320 Coupe is similarly equipped, but it upgrades to a 3.2 liter V-6, which generates 215 horsepower. The C230 Coupe also has a Sport Sedan counterpart, which adds leather upholstery, a power driver's seat, and illuminated visor mirrors. The C320 Sport Sedan adds a power tilt/telescope steering wheel, ten-way power front seats, a memory system for the driver seat, aluminum interior accents, and a Harman/Kardon sound system to the C320 Coupe's equipment list. This sedan is also available with AWD.

Positioned between the C230 and C320 Sport Sedans are the C240 Luxury Sedan and Wagon. This trim adds a few additional features and is also available with Mercedes' 4-Matic all-wheel drive system. The C240 is powered by a 2.6 liter V6, which makes 168 horsepower.

C-Class options are largely dependent on trim levels, but there are a few notable packages. The C230, C240, C320 Sport Coupe are all eligible for an Entertainment Package, which adds a harmon/kardon audio system and an a six-disc CD changer. The C230 Sport Sedan, C230/C320 Sport Coupe, C240, C320 sedan, C55 are all available with an optional navigation system.

The Mercedes C-Class lineup would be slimmed considerably for the following year, but in 2005, this group offered a variety of body style, power plant, and drive train options. Reviewers praised the C-Class for its powerful V6 engines and cutting edge safety and luxury appointments. Unfortunately, the C-Class features rather pedestrian interior styling, and value in class is rather questionable compared to options like the Audi A4 and BMW 3-Series.

What's your take on the 2005 Mercedes-Benz C-Class?

Lolalo10 My mb240 has began to start to stall out when I come to a stop. I have maintained it pretty well and not sure why it's just began

Users ranked 2005 Mercedes-Benz C-Class against other cars which they drove/owned. Each ranking was based on 9 categories. Here is the summary of top rankings.

Have you driven a 2005 Mercedes-Benz C-Class?
Rank This Car

I bought a manual transmission 2005 c230 Kompressor about a year ago. While I’ve done all the required maintenance, I am having issues with the cars overall pickup power. Real issue is When I go t...

122 views with 4 answers (last answer about a year ago)

How To Remove The Air Intake Cover

Is their a trick to taking the air intake cover off ? Seems awful hard and I don't want to break anything thanks

Where Is My Fuel Pump Location?

Where is my fuel pump located on 05 mercedes c240 2.6 rear wheel drive right driver's side backseat or left passenger side backseat

Changed the alternator First unplugged the battery. Installed and put everything back together and the car will not start. Checked battery and it is good. Ground cable gets warm when trying to star...

441 views with 7 answers (last answer about a year ago)