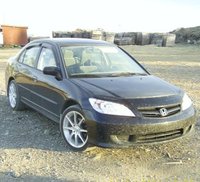 Whether you seek a dependable daily driver, a fuel-efficient hybrid, or a sporty hot hatch, the 2005 Honda Civic lineup has the right scratch for what’s making you itch. 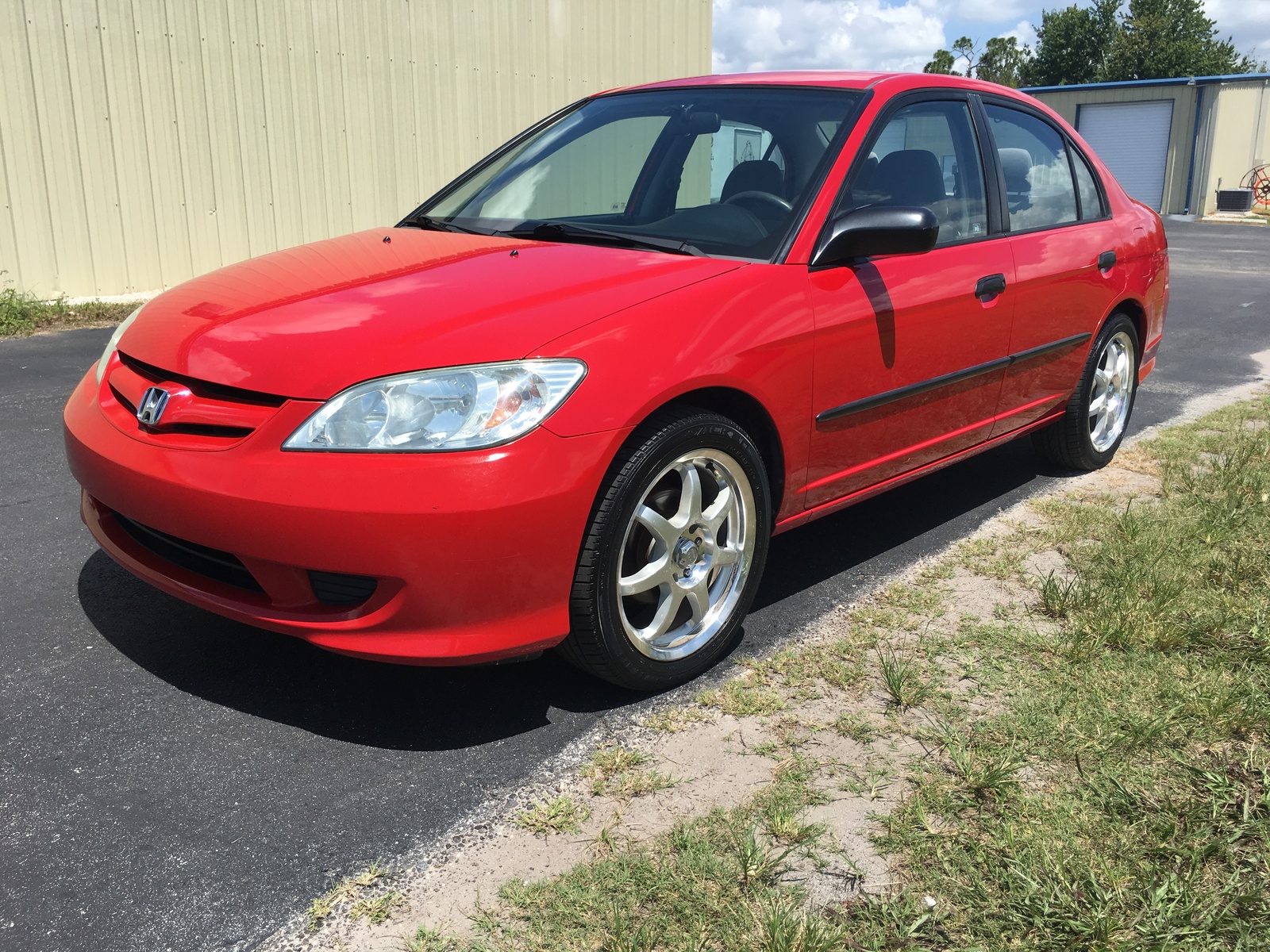 Honda reinvented the small car when it introduced the first Civic more than 30 years ago. Today, the 2005 Honda Civic serves as a segment benchmark in many respects, even if this is the final year before a completely redesigned version arrives.

The most popular Civic is the 4-door sedan, available in DX, LX, EX, and SE trim. A 2-door coupe adds a sporty look and comes in VP, HX, LX, EX, and SE trim, and a 3-door hatchback body style for the racy Si trim. And if you want a hybrid or a version that burns natural gas, both types of powertrains are offered in sedan format. 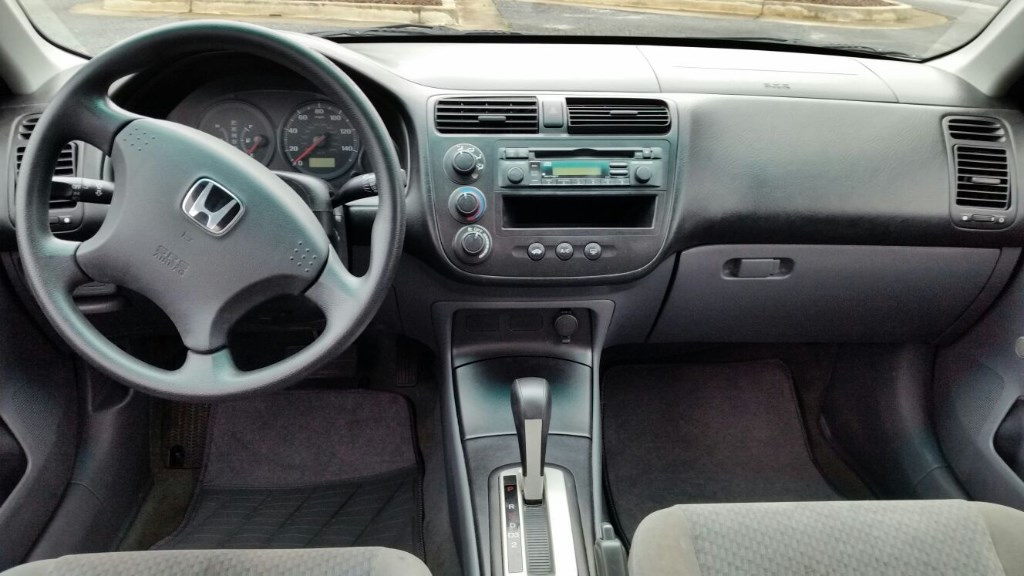 Compared to previous versions of the Civic, this seventh-generation model lacks imagination, inside and out. Equipped with conservative, creased-and-folded bodywork, the Civic sedan and coupe are nap-inducing to behold, while the Europe-sourced Civic Si hatchback looks like a doorstop on wheels.

Inside, the Civic Si is funky, giving the car some much-needed personality. White-faced gauges, a manual gear shifter jutting out of the dashboard, sport-bolstered seating, and a handy shelf embedded into the dash in front of the passenger’s seat add a unique twist.

Comparatively, the cabins of the sedan and coupe are plain and simple, rendered mainly in hard plastic like other cars in the segment but exhibiting high build quality. All Civics have clear and legible instrumentation, unusual stacked climate controls, and a small, cluttered stereo interface located over an odd tray embedded in the dashboard. 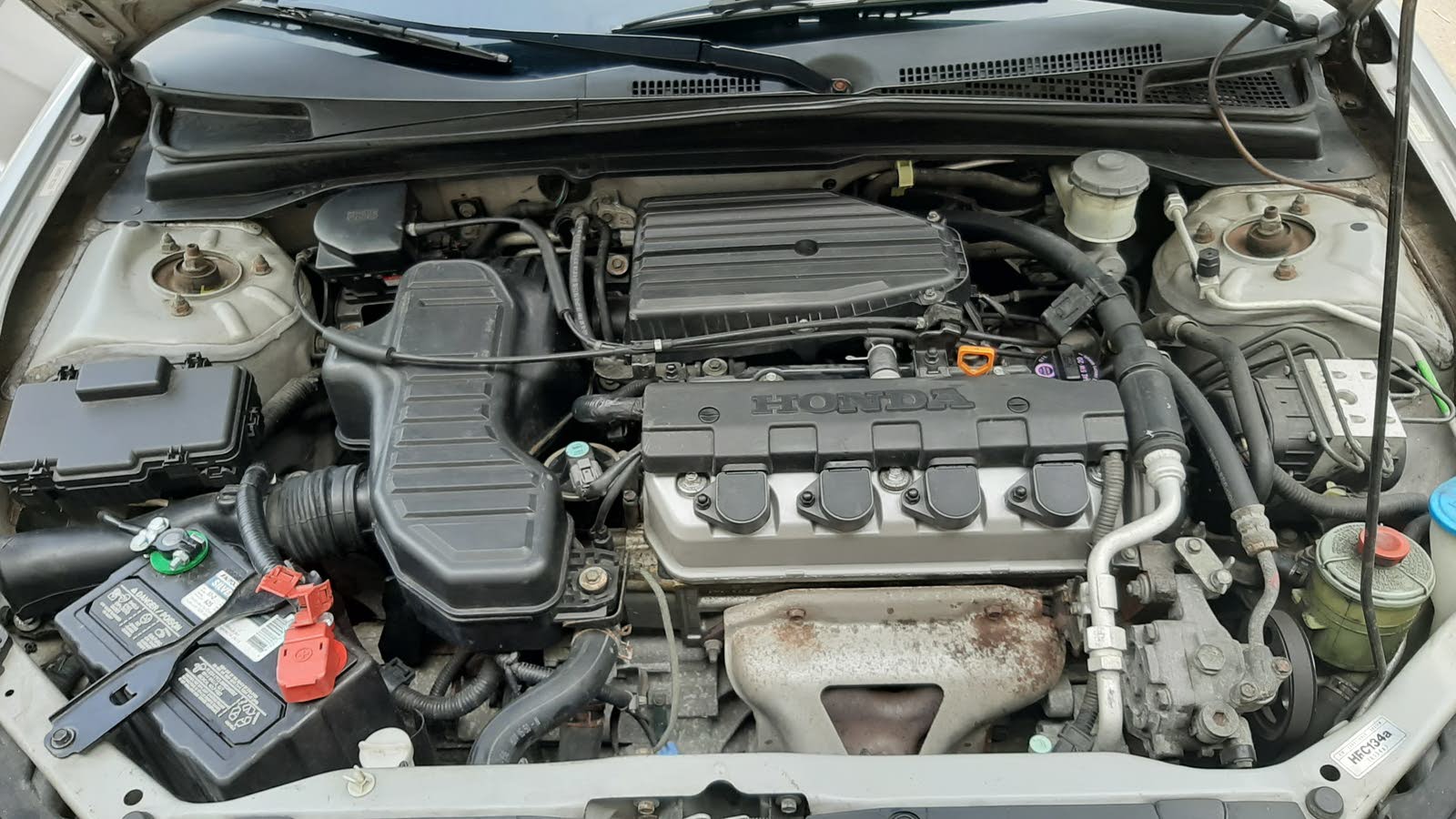 Honda offers multiple engines in the 2005 Civic. Most of them come with a 1.7-liter 4-cylinder engine paired to a 5-speed manual or 4-speed automatic transmission. It makes 115 horsepower unless you choose EX or SE trim, in which it whips up 127 hp.

The Civic HX coupe is equipped with a high fuel economy version of the standard 1.7-liter 4-cylinder. It makes 117 hp, a 5-speed manual transmission is standard, and a continuously variable transmission (CVT) is optional. A Civic GX sedan is also available, burning natural gas rather than unleaded gasoline to make 100 hp. The GX includes a CVT as standard equipment.

Get the Civic Si, and you’ll enjoy a high-revving 2.0-liter 4-cylinder cranking out 160 hp. It comes with only a close-ratio 5-speed manual gearbox, and you’ll work it because peak power comes on at 6,500 rpm, just shy of the 6,800-rpm redline.

Let’s not forget the Civic Hybrid sedan, which marries a 1.3-liter 4-cylinder engine with an electric assist motor and a CVT. It makes a total of 93 hp, but thanks to instantaneous electric motor torque, acceleration is decent.

Driving impressions vary depending on the version of the Civic. The popular 1.7-liter and 4-speed automatic combination supply adequate power, but if you can drive a stick, Honda’s silky smooth gearbox is a pleasure to use. Hybrids are frugal instead of fast, and if you’re willing to flirt with the engine’s rev limiter, the Civic Si is downright quick.

All but the Si have front disc and rear drum brakes, and Honda uses a MacPherson strut front and double-wishbone rear suspension design. Most versions of the car feel a little soft rather than crisp, with occasional rear bounciness in the ride quality. The Si is the fun Civic, thanks to its Euro-tuned handling, electric steering, 4-wheel-disc brakes, and 16-inch wheels. 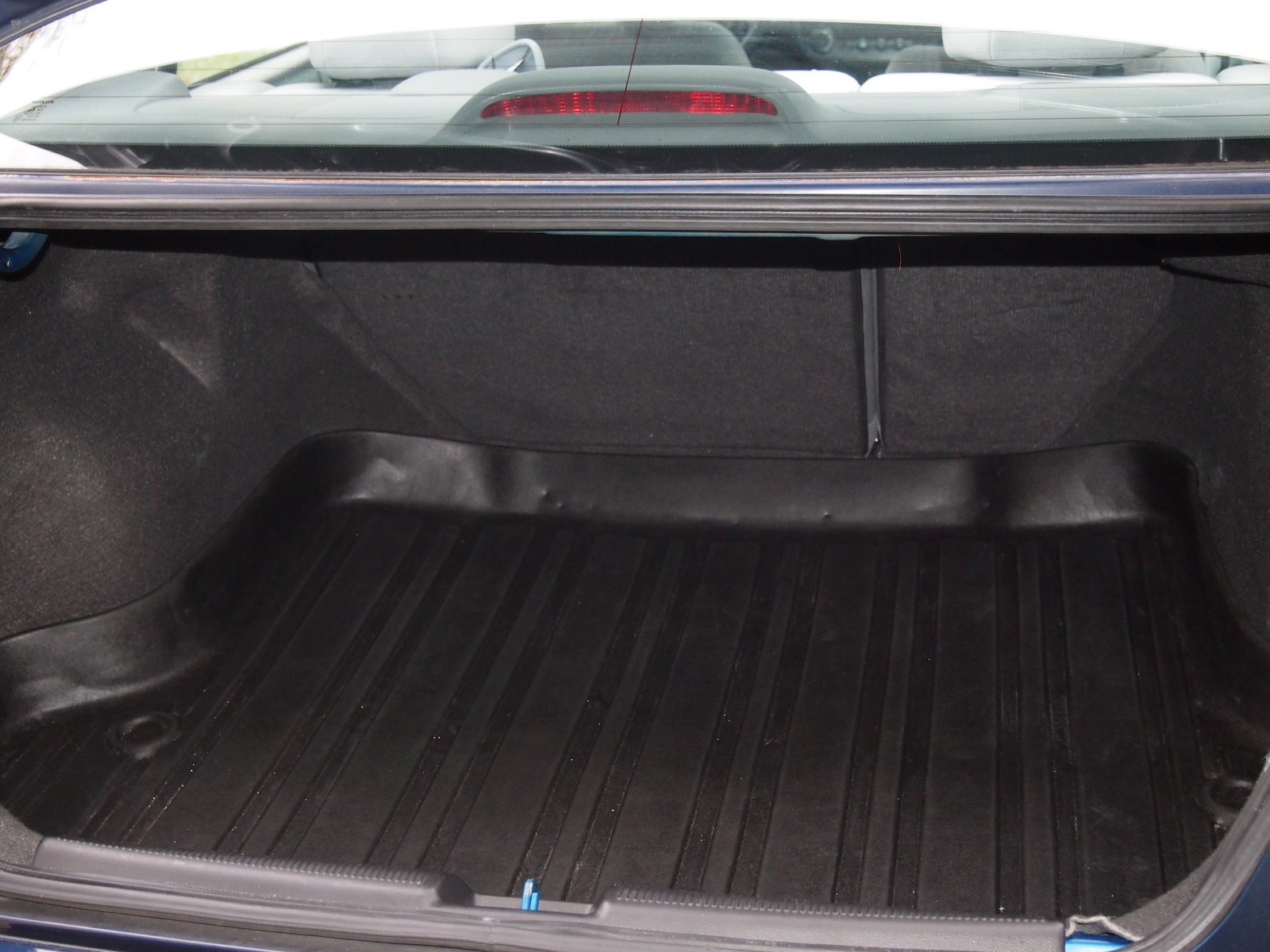 Buy a Civic DX sedan, and there’s nothing “deluxe” about it. You don’t even get a CD player. Or air conditioning. Those features are included in the VP and HX coupe while moving up to LX trim adds power windows, power door locks, power side mirrors, cruise control, and a remote keyless entry system. Honda equips the Civic GX in a similar fashion to the LX.

The Civic EX looks better thanks to aluminum wheels, and it's more comfortable due to a driver’s seat height adjuster. It also has a power sunroof and forms the basis of the SE trim, which adds a better stereo, a rear spoiler, and other upgrades. Hybrids and the Civic Si are similar to the EX in terms of equipment.

Technically, the Civic seats five people, but four will be happier. Storage spaces inside the covered bin forward of the gear selector, in the glove compartment, and in the door panel bins are decently sized, and don’t forget about the tray under the stereo or the Civic Si’s big dashboard shelf.

When it comes to cargo, the Civic Si is the best bet. It offers 15.7 cubic feet behind the back seat and 35.7 cubic feet with the rear seat folded down. Civic coupes and sedans each boast a roomy 12.9 cubic-foot trunk, while the Hybrid accommodates 10.1 cubic feet to make room for the battery pack. The natural gas GX’s special fuel tanks chew into trunk space, leaving just 7 cubic feet for your luggage. 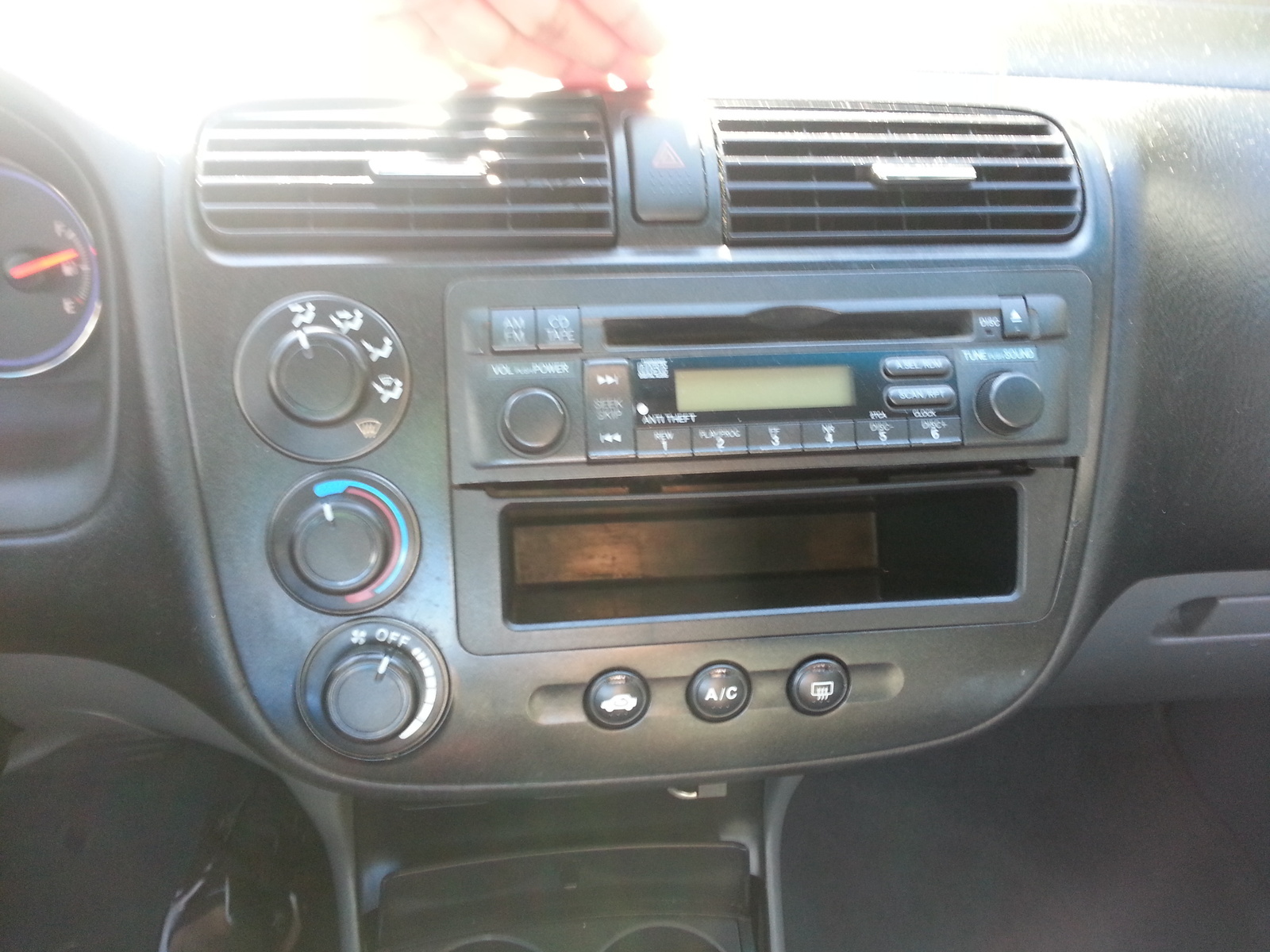 Nearly every 2005 Honda Civic includes a CD player. None of them offers new Bluetooth cell phone pairing for hands-free calling capability. For a premium sound system, you’ll want the Civic SE, which gets better speakers, a CD changer, an MP3 player, and an auxiliary input jack.

Otherwise, in terms of technology, the Honda Civic GX, HX, and Hybrid showcase eco-friendly powertrains. Perhaps the most accessible of the trio, the Civic HX’s engine employs lean-burn technology, which emits fewer hydrocarbons into the atmosphere. The continuously variable transmission used in this trio of Civics is also a fuel saver. 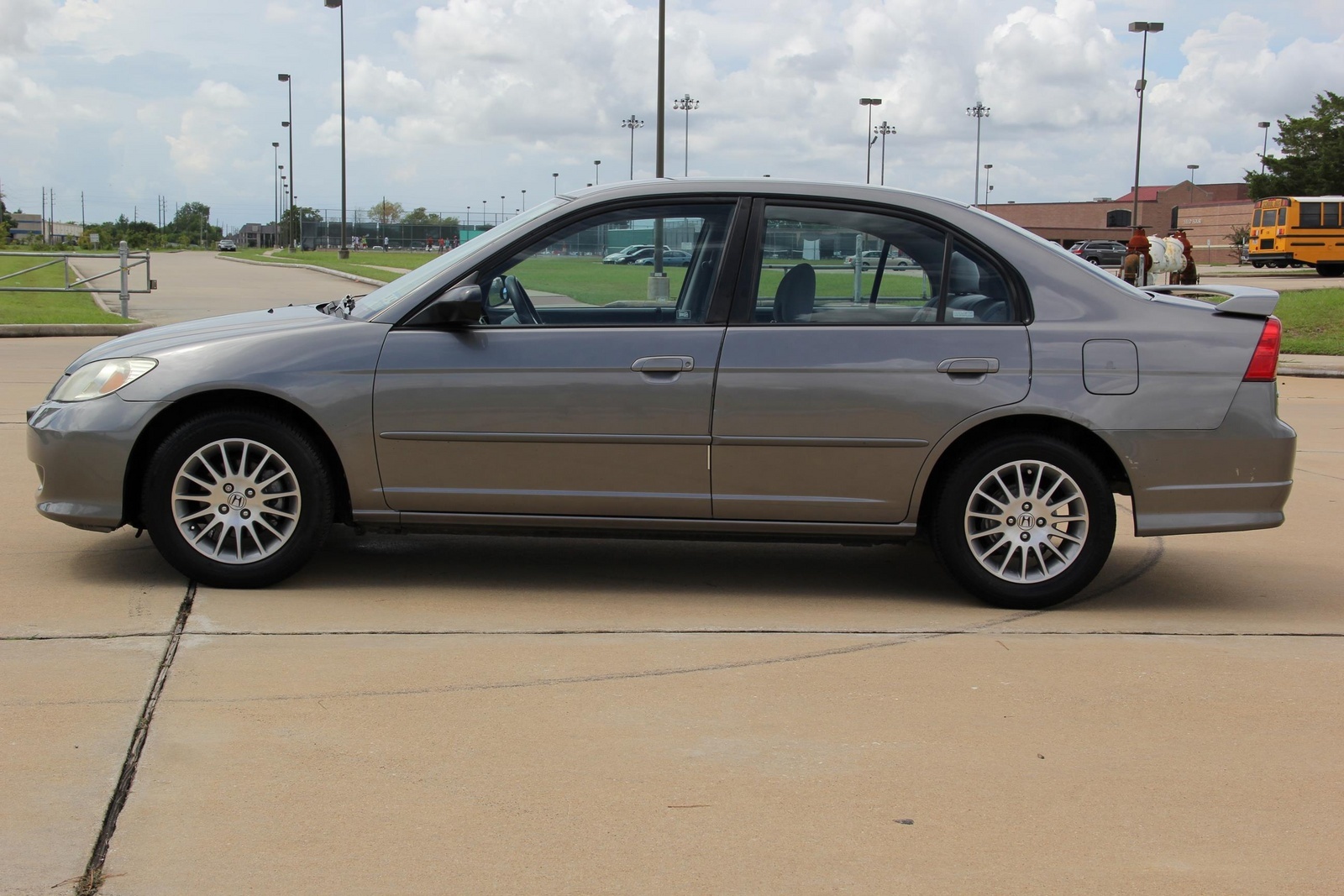 Aside from the underlying vehicle structure, the 2005 Civic’s primary safety system is a set of dual front airbags. Side-impact airbags are an option, and they improve safety. In order to get antilock brakes, you’ll need EX, SE, Si, or Hybrid trim.

According to the Insurance Institute for Highway Safety (IIHS), the 2005 Civic sedan earns a Good rating in the moderate front overlap test and a Poor rating for the seats and head restraints. The National Highway Traffic Safety Administration (NHTSA) assigns 4-star and 5-star ratings across the board, with the exception of the Civic coupe without side airbags, which gets a 3-star rating for front-seat protection. 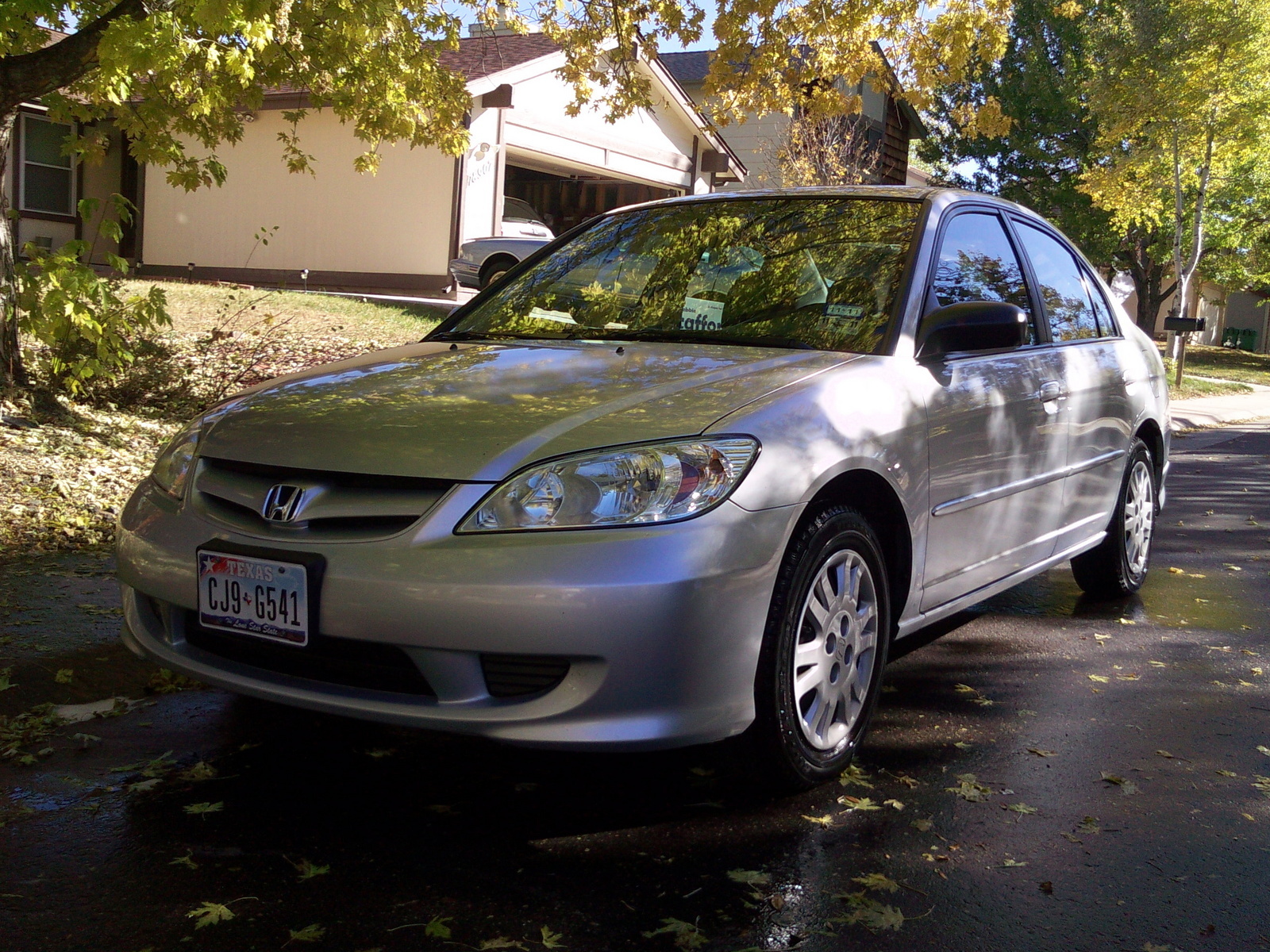 Known for their reliability and resale value, a Civic is a good bet in terms of value even if it tends to be a little more expensive than some competitors. In particular, if you don’t mind the reduced performance and higher price, the Civic Hybrid’s thrifty nature could prove mighty beneficial over the long haul. The Civic Si, with its odd look and manual-only gearbox, could prove hard to sell in the future.

Users ranked 2005 Honda Civic against other cars which they drove/owned. Each ranking was based on 9 categories. Here is the summary of top rankings.

Have you driven a 2005 Honda Civic?
Rank This Car

I just put a crankshaft and a cam position censers and o o2 censer the car jerks front to back when I step on the gas. The guy at the Honda Dealership said the computer does not need reset. What wou...

Hi My Name Is Betty Johnson

Why Is My Heater Not Working Well In My Honda Civic

I have a 2005 Honda civic. My heater only works when I drive about 30 mph or more, but not always. Sometimes even while moving it will blow non heated air.It blows cold air at stop lights or when g...

You I have a 05 honda civic ex 1.7 special edition when i crank it up for the first drive of the day the car runs great shifts great drives great everything as expected but about 10 15 minutes when...

Ac Stopped Working, Any Ideas On How To Fix It?

I have an 05 honda civic, the ac just stopped blowing cold but it has refrigerant, the clutch on the Compressor still engages, all fuses and relays are good. Any ideas on what could be the issue?

17 views with 4 answers (last answer about a year ago)