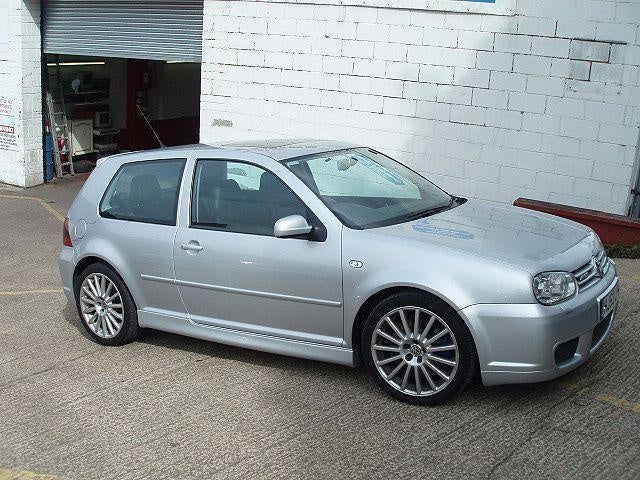 Volkswagens have long been known for their diesel engines, and for 2004, the Golf got a more powerful TDI (turbo direct injection) diesel that still achieved around 50 miles per gallon on the freeway. The Golf's 1.9-liter diesel saw its horsepower upped from 90 to 100, giving it a bit of an extra kick off the line and a bit more help when passing at highway speeds.

The 100-hp diesel could be dropped into both the four-door Golf GL model and the higher-end four-door GLS version. The standard engine in the GL (also available in as a two-door model) and the GLS was a 115-hp, 2.0-liter gas engine. A five-speed manual transmission was standard across the line. A four-speed automatic transmission was optional with the gas-engine Golfs, while a five-speed automatic was optional with the TDI diesels.

Standard features for the base GL package included air conditioning, power windows, power door locks, front and side airbags for the driver and passenger, anti-lock brakes, a tilt/telescoping steering column, an anti-theft alarm system, a keyless entry system, cruise control, and a stereo system with a CD player. The GLS added a power sunroof, among other features. Stability control is optional across the line.

For the 2004 model year, Volkswagen also offered a limited-edition Golf R32, which came with a 240-hp, 3.2-liter V6 engine, a six-speed manual transmission, a dual exhaust system, and a sport-tuned suspension.

The Golf's acceleration, handling, braking, and safety features were cited as positive points by drivers, although some noted that frustrating quality-control issues persisted with the car. The electrical system and automatic transmission were singled out by some drivers as particularly troubling.

What's your take on the 2004 Volkswagen Golf?

Users ranked 2004 Volkswagen Golf against other cars which they drove/owned. Each ranking was based on 9 categories. Here is the summary of top rankings.

Have you driven a 2004 Volkswagen Golf?
Rank This Car

Can someone help.... I have a 2004 VW Golf MKV. I bought it a year ago and it had done 55913. I replaced the timing belt and water pump not long after I bought it (on recommendation from a vehicle i...

does a code have to cleared or does it go away when a repair is made. I had a oxygen sensor code on my VW I put in new oxygen sensors upstream & downstream will the code go away or do I have to have...

Bought a doubledin sterio jvc kw510 can this be fitted to my car 2004 golf tdi 2.0 auto. as size and wires are different to what I have already in the the car.

I took my 04 Golf to the dealership at 105,000 miles for a standard timing belt / water pump change. The car was running fine, it was just time. It hasn’t been 2000 miles and the timing belt area h...

My engine revved up real high like has was stuck so I turned the car off. When I started it back up there's no response from the gas pedal. The car will idle and if, I put it in seconds will coast...