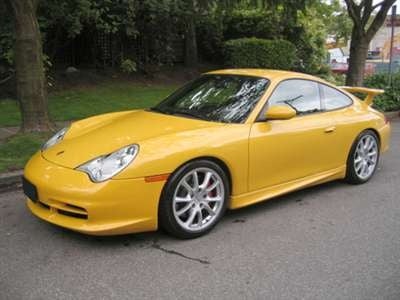 Average user score
4.8 ⁄ 5 stars
Based on 36 reviews
Porsche 911 by Carl — This car belonged to a friend who was driving it in the middle of winter with snow on the ground despite owning a Toyota landcruiser as he said it had better handling in the bad weather. I sat in and ... Read more
Review by Guru3RZ2Q — Sold mine four years ago and have regretted it almost every day since. These are a great way to relieve stress. The drive is very analog and very involving if not stupid fast like so many cars today... Read more
Licence Loser by Giles — I drove this car at Thruxton - it is incredibly easy to get in and drive quickly on a track. With my limited talent, I probably went faster in this car than either the Ferrari F430 or Lamborghini LP64... Read more 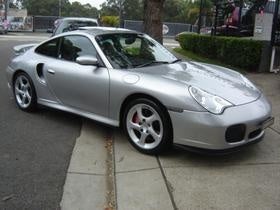 Porsche added a number of new models to its 911 lineup for 2004, including convertible (cabriolet) versions of the Carrera 4S and the 911 Turbo, as well as a 40th Anniversary limited edition and a GT3 model that draws from Porsche's racing heritage. In addition, the GT2 model was equipped with larger brakes, a retuned suspension, and an upgraded engine with more horspower (up 21 horsepower from the previous year, to 477 hp).
All Porsche 911s were rear-engined, rear-wheel-drive vehicles, and all seated four passengers (though admittedly the back seats were cramped) with the exception of the GT models, which were two-seaters. The standard 911 powerplant was a 3.6-liter horizontally opposed six-cylinder engine that produced 315 horsepower, which was dropped under the hoods of the Carrera coupe and cabriolet, Carrera 4 cabriolet, Carrera 4S coupe and cabriolet, and the Targa, a convertible-like model with a retractable roof.
The 40th Anniversary coupe was powered by a 345-horsepower six-cylinder engine, and came with dark gray leather seats, unique aluminum and silver metallic interior trim, chrome tailpipes, special 18-inch wheels, exterior air intake grilles, and a specially tuned suspension.
The 911 Turbo coupe and cabriolet were equipped with either a turbocharged 415-horsepower, 3.6-liter six-cylinder engine, which was standard, or an optional 444-horsepower six-cylinder. The GT3 was powered by a 360-horsepower six-cylinder engine, while the racing-oriented, stripped-down GT2 blew out the competition with a turbocharged 3.6-liter six-cylinder that pumped out 477 horsepower.
As expected with an exotic sports car of this caliber, the 911 came with a wide range of standard features, including four-wheel anti-lock brakes, dual front and side airbags, air conditioning, power brakes, power windows, power heated mirrors, lighted entry and anti-theft alarm systems, cruise control, leather seats, a leather-wrapped steering wheel, and audio systems with CD. A six-speed manual transmission was standard across the line, while Porsche's five-speed Tiptronic automatic transmission, with a special gate for manual shifting, was optional on all but the GT3 and GT2 models.

oottoo I owned a 4S cabriolet in Germany. Car was OK but AWD makes it heavy in the handling dept. For my money a Boxster S is a better sports car; 911 has gotten too fat and too much emphasis on "luxury".

To whom it may concern, if a car buyer made a deal with a seller and now having second thought because the market went down, what should I do? It has been a couple of weeks of asking him to move for...

I don't see where a potential buyer can contact me anywhere on my ads.

Is a ceramic bearing the way to go with replacement vs conventional and if replaced with either one, will it have to be done again ? Thank you

We tried to list our Porsche yesterday, paid 29.95 for ad, and can't see it as a prospective (test) buyer. Also now see ad saying it is free to list

I Listed My Car For Sale By Owner Yesterday For 29.95 But Cannot Find It Li...

I listed my car with you yesterday for 29.95 but cannot find the listing?