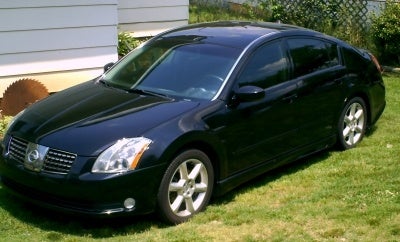 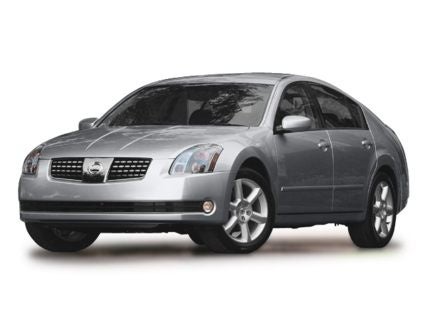 Sharing the same chassis as the Altima, and actually now a bit smaller than its fellow mid-size sedan, the 2004 Nissan Maxima looks to distinguish itself with a sporty makeover and a focus on personal luxury and refinement. It adds three inches to its wheelbase and over an inch in width, for more interior comfort. It also gets a new and highly rated 3.5 V6 that hits 265-hp, 20 more than in the Altima.

The 2004 Maxima comes in the sports-oriented SE and more upscale SL trims. A 6-speed manual is standard on the SE, while a 5-speed auto tran comes with the SL. The automatic is optional for the SE. Both sedans feature the Skyview glass panel that stretches the length of the roof for better visibility for all passengers. It doesn't open like a sunroof, but a traditional sunroof is optional. The 2004 Maxima does not offer a sedan without this panel. Both SE and SL trims come with power seats, cruise control, auto-dimming mirrors, power folding mirrors, a garage opener, ABS brakes, and CD player. Traction and stability control are available options. The SL adds heated leather seats, memory settings, and power passenger seat. Many of the SL features are options for the SE. The SE focuses on performance, with a stiffer suspension and larger 18-inch tires. Xenon headlights and a rear spoiler are options for the SE. Both cars can also be equipped with a DVD system.

The new styling of the 2004 Maxima emphasizes fun, with a sloping coupe-like roofline. The roomy sedan seats five, but there is an option to replace the rear bench with two heated bucket seats and a center console. Since the Altima has the lower price tag, the 2004 Maxima emphasizes its posh interior loaded with convenient and indulgent features. Owners like the extra attention on them and they love the V6 engine. The ride is smooth, even in the SE. Downsides are an extremely wide turning radius and reported problems with the front struts, rotors, traditional sunroof getting stuck, and a tendency for steering wheel shudder at high speeds.

Will I've been driving mine for 15 years and 130K miles and have had great luck with it so far. It has a very smooth ride, terrific handling and pretty good gas mileage (I regularly get 32 mpg on the highway). Except for some expected wear and tear, the car still looks almost new which is a testament to it's fit and finish. Because I'm retired and drive very little, this car might last another 15 years and I can keep listening to my CD player (or even the tape player!)

Have you driven a 2004 Nissan Maxima?
Rank This Car

Can I use a 2004 Nissan Murano 3.5 v6 engine in my 2004 Nissan Maxima SE 3.5 v6 ??? Both vehicles are automatic transmissions but the Murano is a rear wheel drive and Maxima is front wheel drive...

Battery Warning Light Comes On, Randomly, Than Gous Off

How Do I Disable Car Alarm

Can I Drive Without Brake Shoes And Brake Caliper Passenger Rear