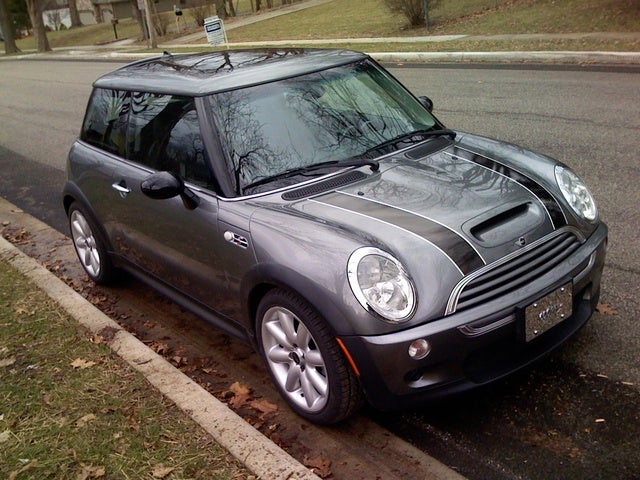 Two years into its production run, the 2004 MINI Cooper was essentially unchanged from the vehicle that first hit showrooms in 2002. Minor upgrades included a new digital speed readout as well as an optional three-spoke leather-wrapped steering wheel.

But the essentials of the MINI Cooper remained the same. The BMW-engineered, front-wheel-drive, two-door hatchback was one of the shortest vehicles on the road, though it packed a lot of engineering and style into its small frame.

The MINI Cooper was available in both Standard and S (Supercharged) trim packages for 2004. Power for both models was provided by a 1.6-liter inline four-cylinder engine. For the Standard model, horsepower was rated at 115, while the supercharged engine in the S version pumped that up to 163 horsepower. The Standard version received a five-speed manual transmission, while the S version upped that a notch with a six-speed manual. A continuously variable automatic transmission (also known as a CVT) was optional in the Standard model.

The MINI Cooper was well-equipped with such standard features as air conditioning, power windows, power door locks, dual front and side airbags, an AM/FM stereo system with a CD player, remote keyless entry, and anti-lock brakes. The S version received larger 16-inch tires (as opposed to 15-inch tires in the Standard model), as well as a hood scoop, traction control, and a sport suspension. A sunroof, leather seats, and a navigation system were among the options.

The MINI Cooper's BMW heritage appealed to many drivers, who felt they were getting a BMW-quality car at a cost that was considerably lower than that of a typical BMW model. Drivers were impressed with the MINI's power, and the fact that it was easy to park just about anywhere. Some drivers were put off by the MINI's small size, but most drivers found the vehicle to be fun to drive, nimble, reliable, economical, and comfortable, as well as a head-turner on the road.

Have you driven a 2004 MINI Cooper?
Rank This Car

While driving my car began to hesitate when going into gear. Shortly thereafter the car would no longer go or go into gear. The rpms go all the way up, but the car will not go. I can shift w...

984 views with 11 answers (last answer about a month ago)

Headlights And Blinkers Not Working

I have an 04 mini cooper that the running lights and blinkers are not working. I have check all the fuses in both boxes, all of the bulbs work. The hazard switch still turns the lights on and they bli...

What Donut Spare Tire Will Fit My Mini Cooper S

I have repaced my runflat tires with regular high performance tires. I have slime and a conpressor but still feel uneasy on out of town trips. I have seen what mini offers but at $300 it is a little...

WAS A 6 SPEED MANUAL AVAILABLE ON THE 2004 BASE MODEL