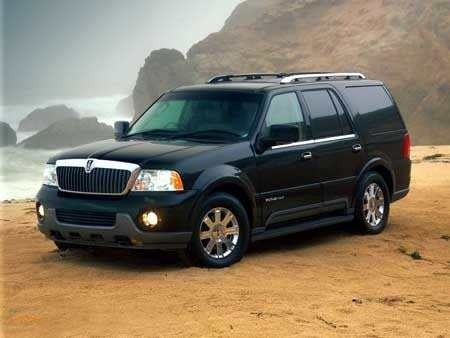 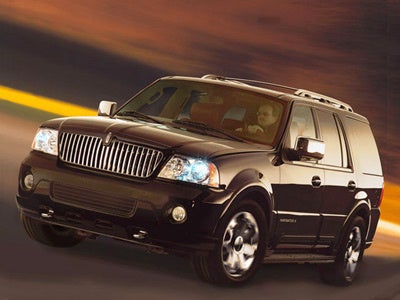 Since the Navigator underwent a redesign for 2003, it appeared much the same in the 2004 model year. Still, there's always some kind of change, and this time around, in addition to a few new colors, that meant the addition of the tire-pressure monitoring system to the list of standard equipment, an upgrading of the AdvanceTrac option to include Roll Stability Control.

One notable feature of this full-sized SUV is its independent rear suspension, which contributes greatly to its car-like ride. It also handles well in spite of its heft, which was of course Lincoln's goal with this vehicle: it was intended to ride smoothly and carry seven or eight passengers, and it came through in that endeavor. Owners of the Navigator, which was built body-on-frame like its counterpart the Ford Expedition, widely praise it for its usefulness and comfort on long drives.

The power behind this behemoth is its 5.4-liter, 300-horsepower V8 engine, which puts out 355 lb.-ft. of torque to please those with something to tow (a tow hitch receiver came standard). Still, this is not a match for the Cadillac Escalade, the Navigator's number-one rival, which offered a 6.0-liter, 345-horsepower engine in two of its three trim levels (and a 5.3-liter, 295-horsepower engine in the other). This is one reason why the Lincoln product never got an edge over the Cadillac, although it did not lack a loyal base of customers, especially since its price was lower.

There isn't much argument that Lincoln did a good job of loading its SUV with niceties. Standards on all levels include leather seating, power lumbar support, power adjustable pedals, and heated oversized power side mirrors. The Ultimate trim level even has power-deployable running boards that extend four inches when a door is opened and then retract when the doors are closed. That's a lot of power accessories, which translates into more capacity for things to go wrong. Indeed, there have been quite a few anecdotal complaints of poor reliability of this SUV. Another common sore point was the car's high consumption of premium-grade gasoline.

In the NHTSA's frontal crash test, the 2004 Navigator earned a full five stars. Standard safety equipment on all trim levels consists of anti-lock brakes with electronic assist, auto load-leveling, plus front-row airbags with side-curtain units as well. No airbags were included for the second and third rows.

What's your take on the 2004 Lincoln Navigator?

Users ranked 2004 Lincoln Navigator against other cars which they drove/owned. Each ranking was based on 9 categories. Here is the summary of top rankings.

Have you driven a 2004 Lincoln Navigator?
Rank This Car

My '04 Navigator has been doing something wierd! Driving the dashlights and windows stopped operating until I braked for traffic etc. then all would work again until I hit the gas. This was the las...

How do i put on new emblem I just purchased????

I just had a rebuilt drivers side head installed, car runs fine but the heat is just a bit over luke warm. I had my shop install a new thermostat and while at the shop it heated up great, I drove 10-1...