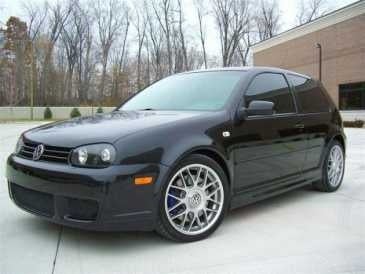 The Volkswagen Golf hatchback was available in two basic trim packages for 2003. The Golf GL came in either a two-door or a four-door version, with either a 115-hp, 2.0-liter 4-cylinder gas engine or a 90-hp, 1.9-liter diesel engine with the TDI (turbo direct injection) feature. The four-door, higher-end Golf GLS, meanwhile, was available with the same two engines. A five-speed manual transmission was standard equipment, while a four-speed automatic was optional.

The big news for 2003 was that both the GL and the GLS came with expanded lists of standard features. The GL received power windows, a CD player, and cruise control as added standard equipment for the model year. Air conditioning, power door locks, dual airbags, anti-lock brakes, and a tilt/telescopic steering column were some of the other features available on the GL. The GLS received a power sunroof as standard equipment for the first time.

Drivers seemed to most appreciate the "fun" factor associated with the Golf, and also cited its value, handling, peppy power, and safety features as positive points. On the downside, reliability and quality-control issues were noted by some drivers.

What's your take on the 2003 Volkswagen Golf?

Have you driven a 2003 Volkswagen Golf?
Rank This Car

Guru9Y3KVZ asked a 2003 Volkswagen Golf GL 2.0 Maintenance & Repair question about a year ago

The key will not turn to lock the hatch on my 2003 VW Golf. It will go all the way in but not turn, it may just be stuck or something could be jamming it. The key is not damaged, it can unlock the f...

I dunno how to turn on the rear wiper in my Mark 4 golf I know I should be able to push the wiper lever away to turn it on but it wouldn't push away?

I have a mk4 Golf 2003 model, having trouble with the engine cutting out and eratic idling. This mostly happens during summer times and (or) when driving in traffic. In the morning (Everyday) when t...

Wont turn on after we replaced the timing belt. We lined up the crank shaft and pulley shaft to the marks and number one piston was up. I read the book some, the tensioner had to be lined up .. but ...