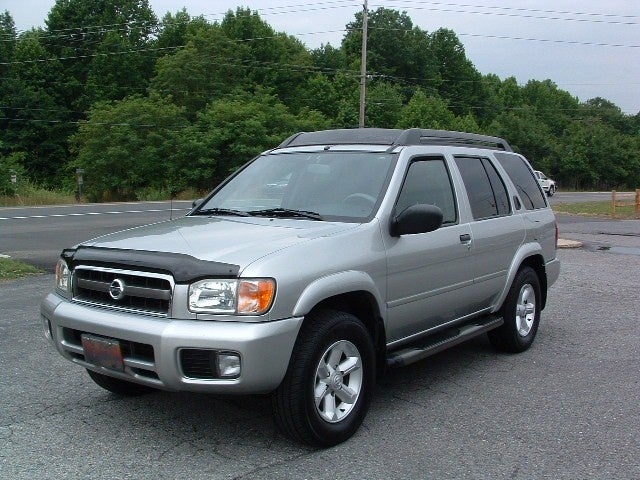 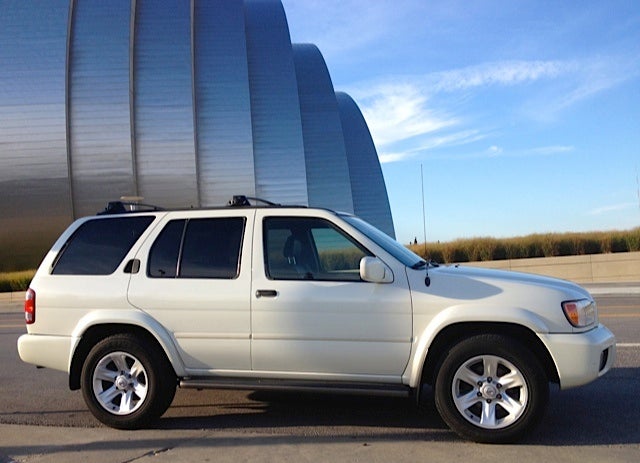 A family vehicle that provides SUV height and cargo capacity, but drives with the ease and maneuverability of a sedan seems to be what many parents are looking for out of their SUVs these days. From its humble beginnings as a two-door truck-based ute, the 2003 Nissan Pathfinder has morphed into a four-door upscale mid-size SUV aimed more at the grocery set than the off-roading enthusiast.

The 2003 Pathfinder comes in SE and LE trims, both with a 3.5-liter, 240-hp V6 engine. The 5-speed manual is no more, so all models come with a 4-speed automatic. The LE gets a few standard upgrades this year, including heated leather seats, memory settings for the driver, a sunroof, and side impact and curtain airbags. These are optional on the SE, which only has dual front airbags. A new optional satellite radio is added this year. Both models come in either rear-wheel or part-time 4WD, with an All-Mode 4WD option for the LE, allowing the drive to select between four different settings, including high and low range gearing. The optional limited slip differential has been replaced by a Vehicle Dynamic Control package, containing traction and stability control and a tire pressure monitor. Both models get a redesigned 4-spoke steering wheel, and the independently-opening rear window can now be opened electronically.

Another option that doesn't return in the 2003 Pathfinder is the navigational system. Both trims feature power accessories, step rails, a roof rack, cruise control, and CD player. The SE is decked out in more sporty trim, with body-colored bumpers and fender flares, and leather trim. The LE is more elegantly appointed with faux wood accents, and it rides on larger 17-inch wheels. Both have two rows of seats, with the rear ones folding flat for extra storage options. Drivers have little negative to say about the 2003 Pathfinder, aside from the cramped rear legroom, limited headroom, and poor fuel economy (around 15/19 mpg). They love its instant acceleration power, car-like handling, 4WD system, and praise the Bose sound system.

What's your take on the 2003 Nissan Pathfinder?

Rondo a real truck suv with a car ride

Users ranked 2003 Nissan Pathfinder against other cars which they drove/owned. Each ranking was based on 9 categories. Here is the summary of top rankings.

Have you driven a 2003 Nissan Pathfinder?
Rank This Car

So about ready to lose it with this car. Any help would be great. My 2003 Nissan pathfinder 3.5L has hard start issues only when hot. When it's cold fires right up. So when engine is up to temp is...

My baby runs GREAT ❤️ I just go thru tires like Crazy?

2003 Nissan Pathfinder Will Not Move In Drive Or Reverse Sometimes But 70 P...

What Are The Signs Of Miss Timing Setting

What are the signs of miss timing setting?