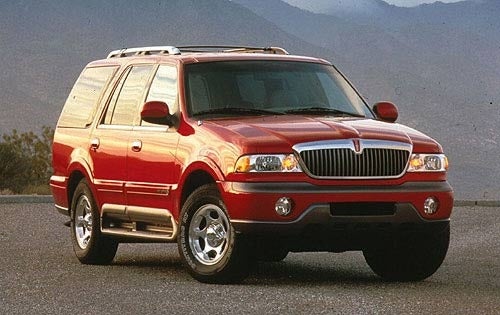 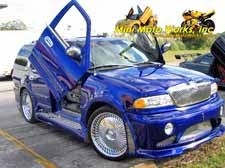 As the Lincoln Navigator was gearing up for a 2003 re-design, not much changed from the 2001 model to the 2002. The most notable was probably the availability of the Limited Edition Black Monochromatic Package,

Just like its cousin the Ford Expedition, the huge (and hugely popular) 2000 Navigator was built on the Ford F-150 platform. Components repeated from the F-150 were the frame and some elements of the suspension and general mechanics.

A 32-valve, 5.4-liter V8 engine, paired with a four-speed, electronically-controlled automatic overdrive transmission, provided the power, putting out 300 horsepower and 360 lb.-ft. of torque. This made it a capable tower, but those power numbers still could have been higher. This engine was paired with a 4-speed automatic transmission with overdrive.

Obviously, a vehicle like this one affords the driver fine visibility, and in the case of the Navigator its huge size belies how easy it is to handle. Speed-sensitive power steering helps with this, and the rear park-assist feature is a godsend for parking.

The Navigator's main competition has been the Cadillac Escalade, which wins out according to most informed opinions, as it is a bit more refined in ride and materials used. Some people contend that the Navigator is overdone as far as its looks, especially because of its rather imposing grille and fascia. Then again, there's a large segment of buyers who value that appearance above other qualities.

Two trims made up the 2002 offerings: two-wheel drive and four-wheel drive. The list of standard equipment was long, leaving just a few things (moonroof, cooled and heated seats, navigation system, and CD changer) that could be opted for. Some of the standout exterior features were oversized heated body-color side mirrors, roof rails, step rails, fog lights, swing-out rear windows, and a full-sized spare carried under the body.

The well-appointed cabin presented contoured leather-covered seats for all three rows, each with separate climate-control. A soft-touch dash capped off an impressive instrument panel, and real wood accents, including those on the partly leather-wrapped wood steering wheel, were complemented by brushed-metal ones. The lucky driver could surely appreciate the 'Gatorâ??s height-adjustable pedals and seat-position memory, and all passengers would benefit from the cabin air filter.

Mechanical features included limited slip differential, stability and traction control, and a wishbone front suspension and beam rear suspension with stabilizer bar. The suspension also came with an automatic leveling function that also kneeled down one inch for passengersâ?? entry and exit.

In their online reviews Navigator owners whined about fuel consumption (although most admitted that they knew what they were getting into) but praised the SUV for the very size that makes it expensive to own. They also praised it for its attractiveness inside and out, as well as its ample storage compartments.

Some complained of a lack of reliability, especially with electrical issues; the '02 Navigator had several recalls, including one for a cruise-control switch that could potentially overheat. Other drivers found the vehicle to be less than agile, and some found the third-row seat to be a challenge to remove when extra cargo space is required.

What's your take on the 2002 Lincoln Navigator?

GuruCQMZB I find that the 02' this being my 2nd owned has too much play in the steering.

Have you driven a 2002 Lincoln Navigator?
Rank This Car

625 views with 4 answers (last answer about a year ago)

My Car Is Knocking After The Repairs Are Done

First of all, my car was broken on the freeway and take the car to service shop and they want to charge me $350.00 just for diagnosis and I refuse get a town at home. one my friends scan the car ...

275 views with 2 answers (last answer about a year ago)

Do You Know The Security Code To Unlock Doors

I have 2002 with the 5.4 that has been idling rough and now stalls after its warm when at stop signs or if i go from park to reverse. I have replaced the PCV valve cleaned the mass airflow sensor alo...

Blew the engine in my 2002 Lincoln Navigator... Want to buy a used car or truck with the same engine...