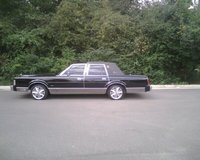 The once-boxy barge by 2001 was several years into its more rounded aerodynamic look. Well, the look may have changed over this stalwart vehicle's existence, but its target market never has; chances are the person you see behind the wheel of a Town Car is either a retiree or a chauffeur.

You could count on this car to provide a cushy ride with plenty of space for passengers and possessions. Two of the trim levels, the Executive and the Cartier, even offer an extended L version that provides 6 additional inches of backseat legroom.

What is arguable, though, is whether or not the '01 Town Car was adequately powered, despite a slight increase (15 horses) over the previous model year. The 220-horsepower V8 that came standard on the Signature and was the only engine available on the Executive was considered insufficient by many critics. The top-shelf Cartier was outfitted with a stronger powerplant, gaining 15 additional horses (as well as a natty dual exhaust). This same 235-horsepower V8 was made available on a Touring Sedan package on the Signature trim.

With its four-speed automatic transmission, the '01 Town Car achieved 18 city miles per gallon and 25 on the open road. The open road is the ideal place for this boat, not because of its performance but because it provides such comfort and plushness for driver and passengers alike. The standard leather seating literally formed the basis for this comfort, and features such as steering wheel-mounted controls and multiple power accessories added to the luxury.

Changes for the 2001 model year were not extensive by any means, but some previously optional equipment became standard: traction control and power-adjustable pedals. Some new options also became available. One of them was a hands-free communication system integrated with around-the-clock emergency response and Internet, a device that was clearly more useful to older executives and the livery drivers rather than the retired set.

Safety equipment on this particular Town Car included the aforementioned traction control as well as ABS and an array of airbags, side-impact units among them. This very safe automobile earned a full 5 stars in the NHTSA's frontal crash testing.

Owners of the 2001 Town Car have for the most part have no regrets with their purchase, judging by the many online reviews. They've called it comfortable, reliable, and classic - and one or two even used the word "agile." Believe it or not, though, some taller drivers have said they felt cramped for headroom in this super-sized sedan. The other qualities that popular opinion found lacking were acceleration, as mentioned, and trunk space. A few owners found some of the controls a bit of a challenge to reach, as well as feeling that the cup holders were not adequately sized for the larger-serving beverage cups of the 21st century.

59sally Love car. Engine no compression. What could cause this?

Have you driven a 2001 Lincoln Town Car?
Rank This Car

Power Steering Is To Sensitive At 65 Mi. And Over

Where Is The Oil Pump Location

where is the oil pump located on my 01 town car?

Hot Air Coming Out Of Vents When Ac Is On Why?

522 views with 2 answers (last answer about a year ago)

Where Is The Starter Located On A 2001 Lincoln Towncar?

212 views with 3 answers (last answer about a year ago)