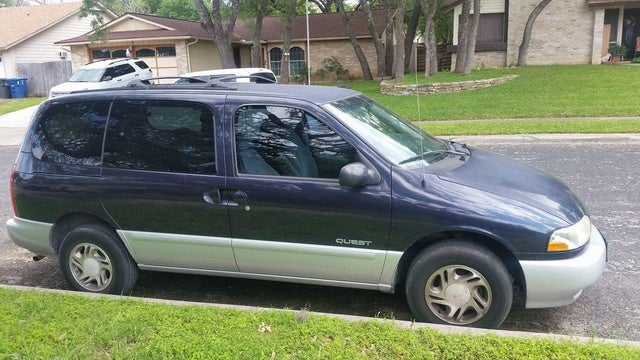 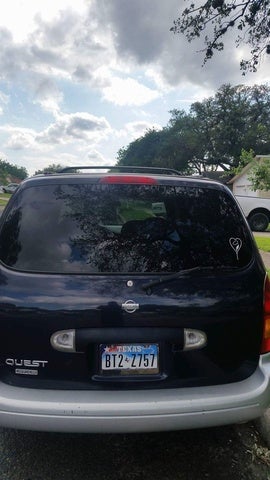 A 1999 redesign of the Nissan Quest minivan updated its engine and added five inches to its length for more interior space, but the 2000 Quest continues to add a few tweaks to some of the standard equipment on the already well-endowed minivan. The biggest addition is a standard VCR system, which used to cost extra. Other minor refinements include wood trim and a stabilizer bar in the GLE, automatic headlights on the SE, and titanium accents on the alloy wheels of the GXE and SE.

The three trims (base GXE, sporty SE, and luxury GLE) feature the same 3.3-liter, 170-hp V6 with 4-speed auto tran. All come with ABS brakes, a sport suspension, cruise control, a roof rack, and dual front airbags. There are three rows of seats that can be configured in up to 24 different settings, an attractive feature for families dividing time between soccer and grocery duty. The GXE features second and third row bench seats, while the SE and GLE come with second row captain's chairs. Both second and third rows can be folded or removed, and with the second row out, the third row can slide forward into six different positions, culminating in folding up against the front seats to provide 135 cubic feet of storage room. Dual sliding doors help with access, though a power option is not offered.

Storage compartments and 13 cupholders abound, and there is even an optional two-tier shelf that fits behind the third row. Owners say the 2000 Nissan Quest has lots of room, and they feel they get a lot of features for the money. The standard VCR is a big hit with parents. They also like the visibility, car-like handling, and styling. Downsides included hard to remove seats, an underpowered engine, useless cupholders, and a long list of repairs that focus on brake wear and VCR failure. The 2000 Quest also only rates a poor to average on frontal impact tests.

Have you driven a 2000 Nissan Quest?
Rank This Car

How to permanently disconnect alarm in 2000 nissan quest

Bought a 2000 Nissan Quest with 87,000 miles on it a week ago. I knew the pads needed to be changed so I had that done a few days later. That is when the problem began. The following night after the p...

Engine cuts out like its not getting gas or losing spark. When sitting still it lobes. If throttle is held down it limits to 2000 rpm as if it hascacrev limiter. Help!!

Replaced Distributor Now Cranks But Wont Start, Could I Have Installed Wron...

as described in question.