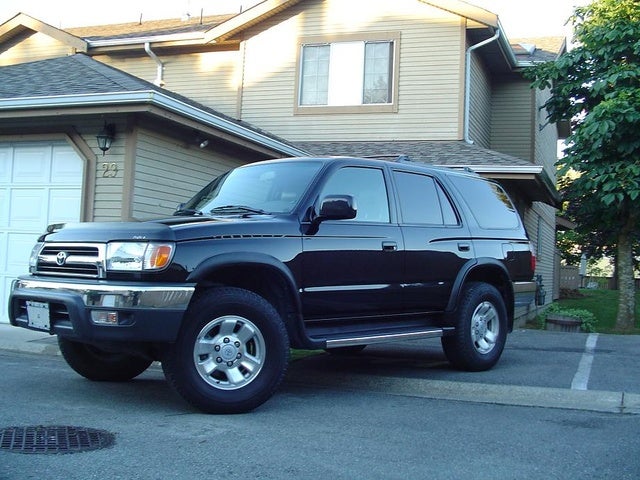 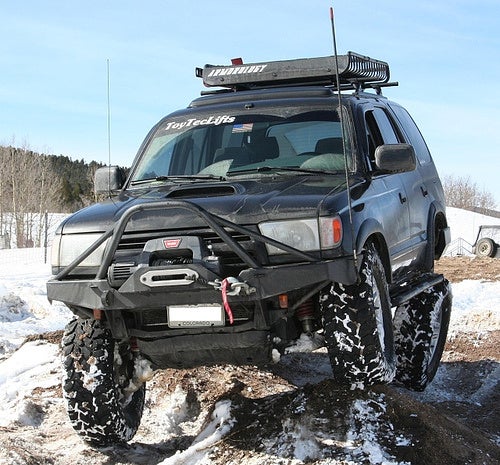 Want some free advice? Never break up with someone on the second day of a 10-day trip, especially when you're traveling through a place with no easy exits or airports. Not the best idea. However, if this does happen to you, hope you are traveling around in a 1999 Toyota 4Runner (as I was when I broke up with my then-boyfriend).

Why is the 4Runner a good car to ride around with an ex in? It's incredibly roomy inside—almost cavernous. Get the stereo pumping, and you will hardly notice the other person is there. And, if you decide to rekindle old flames, the back seat is plenty big. (Just kidding. Well, it might be, but we didn't exactly get there.)

In all seriousness, the 1999 4Runner is a very comfortable SUV with car-like amenities. The seats are comfortable and seem to cradle the back as one would expect from a sportier vehicle. My ex's SUV was the Limited trim, and a 3.4-liter V6 came standard.

Reviewers cite poor gas mileage as a problem but, as is typical for the 4Runner, praise its dependability and off-road capabilities.

SMOKEinWYO I've owned 3 4runners in my life and never thought i needed another. The first one i owned if i remember right was a '98, i do remember that i went places that jacked up, tricked out, big bore trucks couldn't get to, man the other guys would get so mad and i would just giggle and putt on. The second 4Runner i still have, it's a ' 99 that i saved from some college kids,i think they thought it was a boat, or airplane, or possibly a tank, at least that's the way they drove it, when they jumped off of a 20 foot high reservoir wall and into about 8 foot of water, they called and told me come and get it. I was able to get another 100k from the drive train after flushing all the oil, gas, antifreeze and pond water out of everything, and i'm not 100% sure that it's death was not due to my ex-wife, she had taken it cross country and back and when she got back to town, according to her it locked up mysteriously with no warning. I believe, and this comes from first hand experience, that the "check oil" light was probably on for more than a month, and she just had to put that picture on the dash "accidentlily" covering said light. Not saying every woman is like this at all, in fact I'd let a woman rebuild a carb for me over a guy, i have my reasons. Last but not least, the '99 is alive again. i can claim it twice because after i sold it, three different people have owned it, each putting their own style to it. the first owner took out the drive train and put in a small block Chevy, auto trans,(WHYY!!????) and i think dana lockers. Owner number two gave it some "un-inspirational" touches to the vehicle, according to the third buyer the second owner smelled like a brewery at 9 am and the yota's interior was filled with empty beer and whiskey bottles and, in the third owners words, "smelled worse than an out house in the middle of summer". Drunkee Mcgee then went on to explain with great enthusiasm, all the dents he put on it from running across fields avoiding dui's. Third owner turns out to be a pretty clever guy. He put a 22R engine back in it with a manual (because that's what a real man drives) trans, pulled most of the dents and kept the dana's under it with a set of '30's on 15" steel ARW rims. Just before i bought it back a steel I beam went through the grille radiator and top end of the block, i got it back for a quarter of what i sold it for. Now that I've had it back it doesn't look at all stock, because the only thing left on that was original is part of the frame. i did keep with a 24R with a supercharger, just for one simple fact, Toyota engines are BULLET PROOF!!! Dove tailed front and rear, 20 inches chopped out of the center making it a 2 door,chopped the top 5 inches, 4 inch body lift 3 on suspension lift, shock hoops that go higher that the hood and rear side windows, need them that tall because now i have two and a half feet of shock travel, boxed the frame, 4 links front and rear kept the dana lockers but now it's rolling on 40" mudder's and you should hear the beautiful music they make going down the road. Mufflers are non existent, straight piped with the exception of an expansion chamber after the header collector. Long story short, if i had my pick of any truck/SUV, I would have to go with a Toyota. Unbeatable in durability, you can find replacement parts anywhere, not that you'd need 'em, their engines are like I've said before are bullet proof. They're tough well built vehicles, if you're thinking of buying one, don't think, do it you will not be disappointed. Toyotas are a good first time buyers vehicle, also a good experienced driver will appreciate all the "stuff" toyota has to offer

Users ranked 1999 Toyota 4Runner against other cars which they drove/owned. Each ranking was based on 9 categories. Here is the summary of top rankings.

Have you driven a 1999 Toyota 4Runner?
Rank This Car

Why Do I Hear A Swishing Sound When I Apply My Breaks?

I have a 1999 Toyota 4runner Limited with 145,000 miles. I get very little heat from the heater, even though the engine temp gauge comes up to temperature nicely. The heat does better on recirculate...

69 views with 3 answers (last answer about a year ago)

brake lights will not turn off.

1999 4runner Driver Side Door Lock Will Not Unlock With Key, But Will Unloc...

How much motor oil required for an Oil Change on a 1999 Toyota 4 Runner V4 2WD Automatic Transmission.