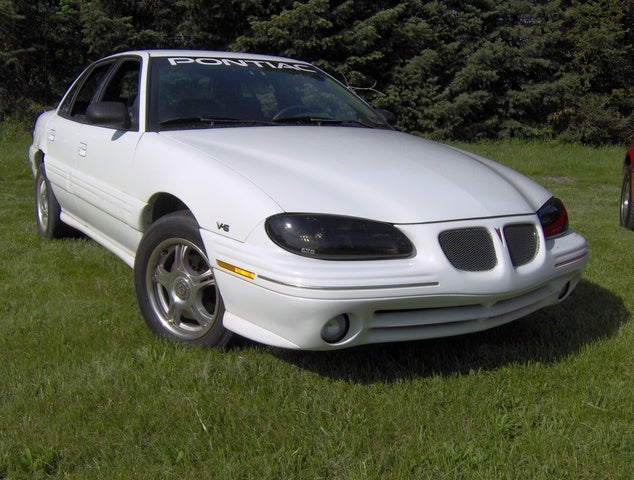 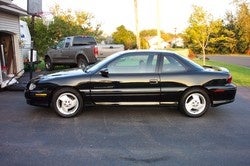 Pontiac was busy concentrating on some of its other models this year, so the 1997 Pontiac Grand Am only got one major change -- air conditioning was now standard across all trim levels. The affordable mid-size sedan or coupe came in a base SE trim and a sportier GT. The SE and GT both housed a 2.4-liter, Twin Cam I4 that got 150-hp with either a 5-speed manual or 4-speed automatic. The GT had the option of a 3.1-liter, 155-hp V6 that got 30 more lb-ft of torque, but was mated only with the 4-speed auto tran.

The 1997 Grand Am still led the pack in the GM lineup, popular for its affordability, performance, and style. With now-standard air conditioning, it also benefited from being well-loaded, with dual front airbags, ABS brakes, daytime running lights, a center and overhead console, fog lights, power locks, and a tachometer even on the SE. While the GT models were the sportiest of the line, with a special suspension, larger anti-sway bars, and a rear spoiler, even the SE sedan had the option of adding leather seats, power driver's seat, its own spoiler, a sunroof, and cruise control.
There are a lot of 1997 Grand Am owners who love their car's performance and handling on the highway, commenting on its good pickup, sporty styling, decent fuel economy, and overall affordability. Comfortable seats and a roomy trunk that can be accessed from the back seat are also high points. But a lot of owners complain about constant mechanical and electrical problems with the Grand Am, and question its reliability. Alternator repairs and brake pads that wear too quickly are common complaints. Drivers also mention that the Grand Am gets knocked around easily by the wind, has a wide turning radius, and plastic parts that break.

Jqjax I absolutely hate mine!!! It's been to 3 mechanics due to what I believe is a passcode problem! Has sat at the curb and only rarely started! However, people that complain against passcode problem state that the security light flashes where mi e remains solid? WHAT???

Users ranked 1997 Pontiac Grand Am against other cars which they drove/owned. Each ranking was based on 9 categories. Here is the summary of top rankings.

Have you driven a 1997 Pontiac Grand Am?
Rank This Car

Cars compared to 1997 Pontiac Grand Am

What Could Be Wrong With This 1997 Grand Am? It Will Start But Won't Run.

We have put in a fuel pump, all sensors are good, new fuel pressure regulator, changed throttle body, checked fuses and I don't know what else. It wouldn't start with out priming, then when it did s...

Passlock 3 Bypass Anything To Save The Car Cheaply

Relearn process isn't being accepted it's a whole new colum I been through it all adding time all the minor details changed up you might run across i haven't replaced bcm or anything else yet it's...

would it make the car faster ?

If Its Not Getting Any Fire?and Fuses R Ok?what Could Be Wrong