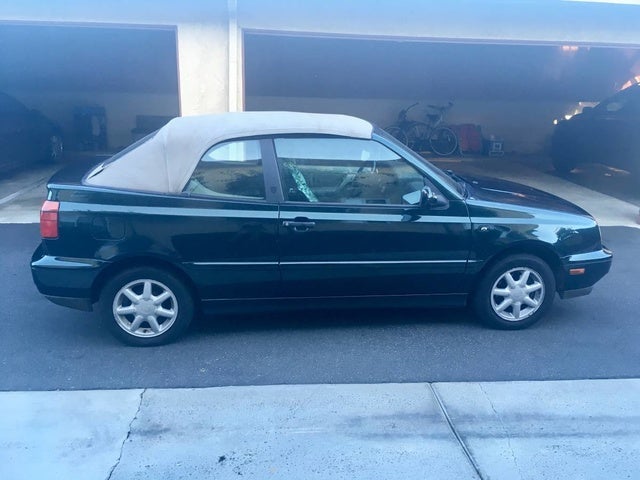 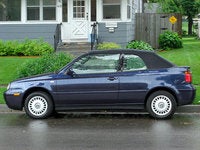 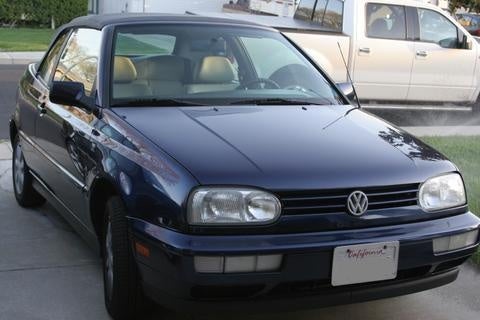 Quick, sporty, economical, and well-equipped with a wide range of standard features, the 1996 Volkswagen Cabio was a worthy addition to the German automaker's lineup. In its second year, the Cabrio was updated slightly, with daytime running lights, side molding that matched the exterior body color, and a dashboard-located central locking switch added as standard equipment.

Among the Cabrio's best standard features was its manually operated six-layer cloth top, which had a glass rear window with a defogger -- a nice feature for winter or rainy-weather driving. A fixed roll bar served not only as a safety feature but also as a style cue. Dual airbags, anti-lock brakes, power windows, power door locks, heated mirrors, cruise control, an eight-speaker stereo system,and an anti-theft alarm system were also part of the package. Leather seats and air conditioning were available as options.

Drivers were very enthusiastic about the VW Cabrio, citing its comfort, gas economy, and "fun" factor as positive points. A number of drivers noted how quickly and easily the top goes up or down, stowing neatly in the rear. Others have commented on the large trunk and convenience of the central locking system.

What's your take on the 1996 Volkswagen Cabrio?

Loudassbug My '96 is a very cool,fun to drive little car.Great gas milage, good looks.I like it more than my 05 V70 XC Volvo.

Have you driven a 1996 Volkswagen Cabrio?
Rank This Car

How Do I Get The Radio Off Of Safe Mode, So We Can Listen To The Radio

Car was starting / running fine. Does sit for a week or two at a time in between being driven. Now it doesn't start. Battery good, new about 6 months ago and kept on tender in cold weather when not...

Pops Out Of Reverse

My 96 Cabrio pops out of reverse then makes grinding noise. It helps if I hold the shifter in place, but it's getting pretty bad. Could new bushing or greased linkage help this problem? Or will I nee...

Why Do Aftermarket Parts Retailers Keep Telling Me,"there Are No Parts For ...

I bought a 1996 MK III Cabrio,I always wanted a VW convertible but could never afford it when I did find one,or they were in too bad condition to pay outrageous prices for.Then I ran across a 96 Cabri...

I've got a 96 VW Cabrio The trans started slipping out of the blue, no warning. (It hadn't been slowly becoming problematic). As I attempted the troubleshooting it got worse to where it wouldn't move ...