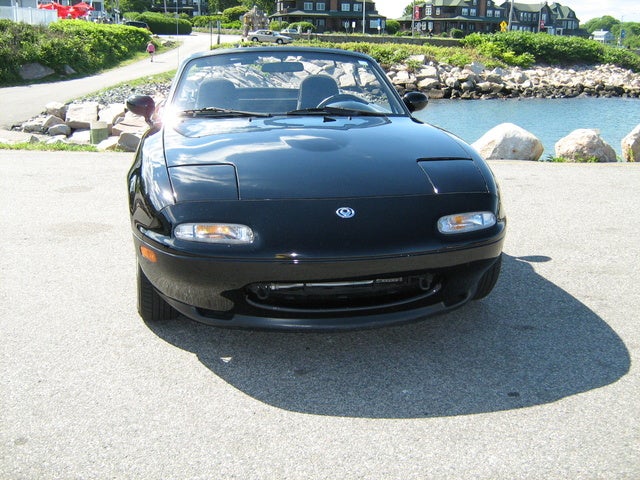 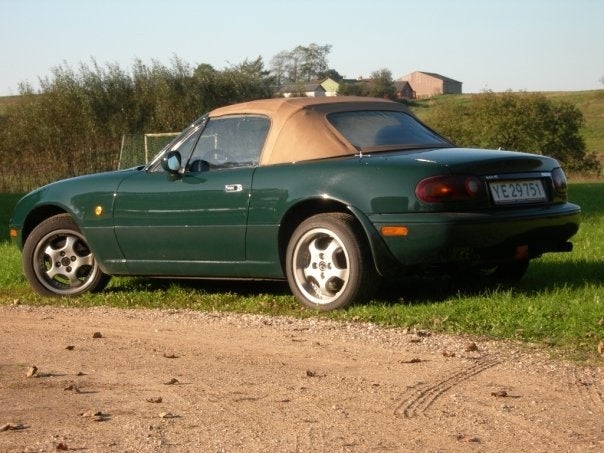 Other than a few updates in interior and exterior colors and options, the Mazda MX-5 Miata was virtually unchanged from the previous year. Power was provided by a 128-horsepower, 1.8-liter, double-overhead-cam four-cylinder engine that was installed longitudinally. It was linked to a five-speed manual transmission. A four-speed automatic was optional.
The MX-5 Miata was available in both a Base model and an upscale M Edition. Standard features for the Base model included a manually operated soft top, power brakes, a driver's-side airbag, remote fuel and trunk releases, and 14-inch wheels. Options included a removable hardtop, air conditioning, power windows, anti-lock brakes, cruise control, a leather-wrapped steering wheel, aluminum alloy wheels, and leather seats.
The M Edition received such upgrades as air conditioning, power windows, anti-lock brakes, and leather seats, as well as special interior and exterior colors.
Most drivers noted that the MX-5 Miata was a fun car to drive (its main selling point) as well as a good value. The car's handling, styling, and drop-top were also among drivers' favorites features. On the downside, trunk space was limited and the interior could be noisy at road speeds, drivers noted.

jr80driver The 1995 Mazda MX-5 Miata is the perfect embodiment of driving pleasure. It's (relatively) quick, agile, and becomes an extension of the driver, rather than merely a machine hurtling its occupants down at breakneck speeds. In the snow the Miata becomes even more fun, despite being a rear-wheel (RWD) convertible, due to the optional Torsen limited-slip differential. All this said, the common phrase, “the answer is always Miata,” may be a misnomer. Miata’s aren’t the best cars for every application, and I’ll go a bit further into depth on that with my own experience. There needs to be a disclaimer because bashing on the Miata is not my intent. Many people have phenomenal stories about these cars, and I have certainly found much joy in mine own. However, there are significant pitfalls to using these cars as anything other than fun weekend cars. Common problems are alternators, radiators, valve cover gaskets, and rust. All but rust can be fairly easily dealt with, but they’re things you have to keep in mind every time you drive. My Miata was consuming oil, and I had to listen for lifter noise every time I drove the car. It was stressful until it blew a piston ring. I actually feel some relief because I’m not constantly worrying about my car breaking down. Now I’m looking to sell it for something with more space and more reliability. While I love Miatas, and love that they can be incredibly fun, perhaps they should remain as a weekend car instead of a daily driver.

Wiring harness from under radio..has no power at connection switch to window switch harnesd.

I was just told that the only diffrence between the batery in my miata and my lawn tractor are the posts is this true the price for a miata battery is $120 and the tractor bat is $25 seems l...

Miata 1995 Steering Wheel Is Hard To Turn. Steering Fluid Is Full. What Cou...

Changed The Spark Plugs And Wires And Will Not Get Over 10 Miles. Can Anyon...

The Mesh Screen That Fits Behind Seats To Curb Back Draft When Top Is Down,...