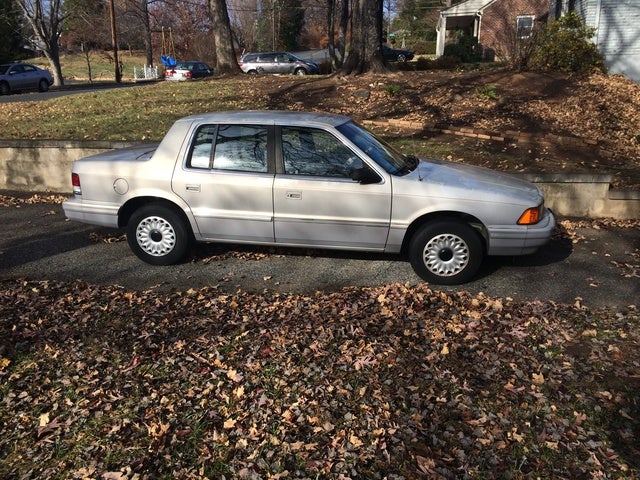 Have you driven a 1994 Plymouth Acclaim?
Rank This Car

the car is slow and comfortable. it is like driving a sofa. very solid build quality, affordable to drive. i have put over 17000K on the car. including price of car and repairs i only have $1700 into ... Read More

This car gets me to work everyday. It handles well for what its is. This car makes handles well in the snow and is hard to dent when you do run into things. One day I aspire to use this car in the 24 ... Read More

When I press on the acceleration pedal my car pulls back and then goes at a very slow acceleration. The color of my car is an aqua green and is very hideous and everyone knows when I'm there 'cause... Read More

Great For A Daily Driver By raffobaghdo

It needs a gas leak repair and front struts. Bought it for 400. It is a really sporty 4dr sedan. Gets 30 mpg most of the time well not now since there is a gas leak. I really like it Read More

Decent Everyday Car, However The 4 Speed Transaxle Leaves A Lot To Be Desired. By Danny

The car gets good gas mileage for size, engine and transmission. I don't think I'd recommend pushing hard on corners with stock - factory setup. There is reasonable front and rear leg room and trunk... Read More

Clean Record With No Accidents.... Owned By 2 Other People By Kolton

i hate everything about this car except that the seats are the most comfortable seats u will ever sit in!!! The 3.0L engine is pretty solid..... right now it leaks oil but that is getting fixed today.... Read More

Good For A Mechanic By paulh902

First car I ever purchased, only 300 dollars. let's put the bad first Leaks like a siv, but fluids are cheap. needed cv half-shafts, power steering belt, a lot of bondo to fix rust holes, all white mo... Read More

i like the acclaims because they are a small and good handling casr and fun to drive its only left me stranded once do to a broke shifter cable and i have never had any mechanical problems with mi... Read More