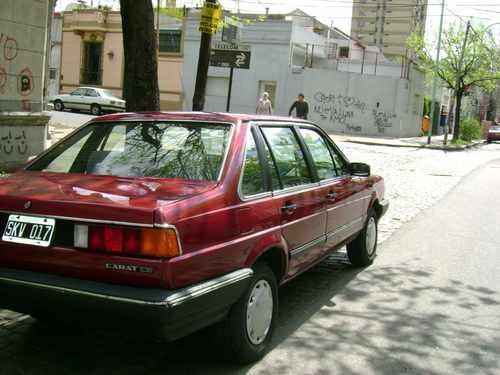 Prior to the arrival of the Touareg SUV in 2004, the Passat was Volkswagen's biggest car. Both sedan and wagon versions were available, in a single trim level, called the GL. Power was provided by a 2.0-liter, twin-cam, 4-cylinder engine that generated 134 hp. It was coupled with a five-speed manual overdrive transmission, which was standard. A four-speed automatic was available as an option.

Generally, drivers were impressed with the Passat. Even older models, like the 1990 version, with high mileage appear to be holding up well. One driver from the North appreciates the way the front-wheel-drive Passat handles in the snow. The Passat's smooth ride, its overall roominess, and good gas mileage were also cited as positive points. About the only negatives were the automatic transmission, which one driver noted could be "quirky" at times, and the relatively high cost of repairs.

What's your take on the 1990 Volkswagen Passat?

Have you driven a 1990 Volkswagen Passat?
Rank This Car

Why No Heat From Heater? A/c Is Working. Is It A Sensor Or Control Problem?...

Hi, I have a 90 Passat with the 2.0L DOHC and recently installed a K&N OE replacement filter wich did wonders for fuel economy and performance but then i had issues with my cateletyc converter. I wan...

Front Motor Mount Separates About 1/2 To3/4 Inch When Going Thru Gears. Top...

so the timing belt broke on my 90 passat with a 2.0L and ima need a new head so if anyone knows where i could get one cheap that would be great

what is the procedure for a cv joint repair?