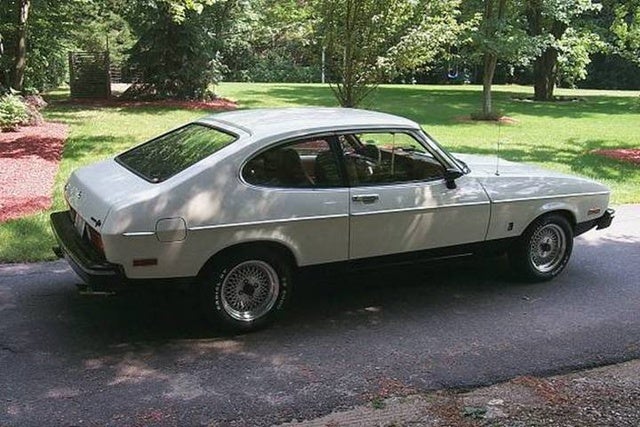 Have you driven a 1976 Mercury Capri?
Rank This Car

I owned a Mercury Capri in 1999. They are awesome little cars, but parts are extremely hard to come by since they were discontinued in 1994. Read More

Awesome Car If They Are In Good Shape! By Christopher

These are great cars but my car is not to hot. The transmission wont go into overdrive so when im going down the high way im raking 4,000 to 4,500 rpms and thats great on a car *SARCASM* the windows b... Read More

Superb 'eye Catcher'. Everyone Wants To Know What King Of Car It Is. By Derrell

Total FUN car. Performance and economy are excellent. Fun to handle curves and mountain roads. Excellent power for a 4 cylinder and quiet - no noise. Nice for warm sunny days - let the top down and en... Read More

It's A Lovely Car To Drive And Has Quite The Kick. And That's Saying Something At 200,000+ Miles. By joannefilm

Super Fun. Like A Crotch Rocket With Air Bags! By surefootcarl

overall i love this thing. old school stand up wind sheild, top hides behind the seat, lines remind me of an Alfa romeo. front shimmies on hard exceleration but mainly in lower gears. only big complai... Read More

I Love It! By McBrag

I just love driving it with the top down. It handles like a go cart, accelerates quickly except on the steepest hills (remember I've got the automatic) and returns 24mpg while I'm driving around the ... Read More

I remember someone I knew had this model back in the mid 90s. It was a soft top. I always liked the style even though it was so much different from the looks of the earlier Capri. I also Liked the har... Read More

I see why they lasted only 3 years. I have 3 of them. Hard to find parts. I bought about $1000. worth of parts over the years on e bay and I should be able to keep them running. You need to be a ca... Read More

performance- Excellent Build quality- great, any car that can live in Michigan and Not rust for that many years is built excellent appearance- looks mean but needs a few dents removed cost of Ownershi... Read More