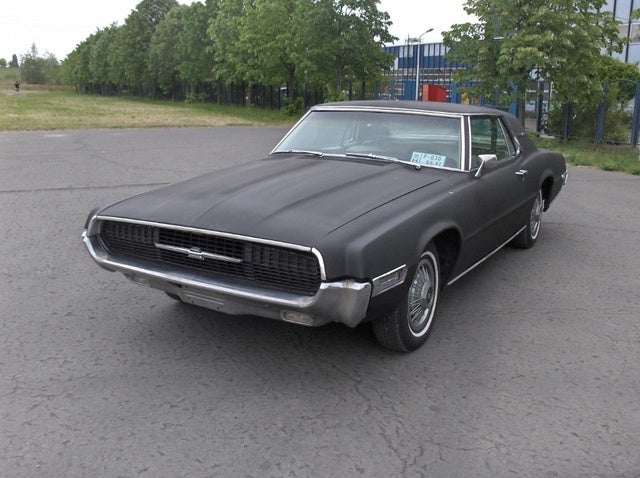 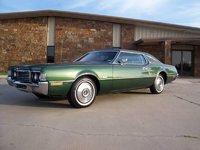 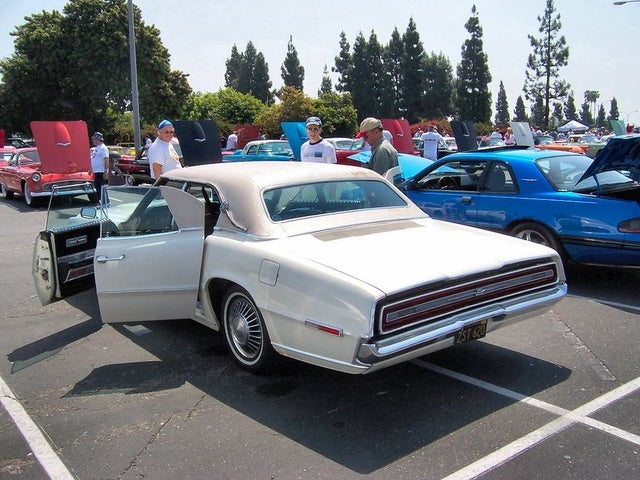 The 1968 Ford Thunderbird is a classic car, representing American luxury. The basic body style appeared in 1967. After three years, in 1970, the Tbird grew a nose and offered a hardtop version with a sloping roof line, but the rest of the body was the same. For those three years, this infamous "electric razor" style represented total American luxury. The vehicle was rear wheel drive, and weighed just under 4500 pounds.
The car came with a standard 390 cubic inch v8 engine, or the other option was the powerful 429 Thunderjet (standard equipment starting 1/1/1968). The 429 engine was a BIG BLOCK, meaning it was built to last, mine has 83,000 miles on it and it feels like its brand new. The 429 was based on the new 385 big block which was not related to FE block used by the 428 Cobra Jet, used in mustangs of that era, the Thunderbird moved pretty quickly with the 429's power, consisting of 360 horsepower and over 420 pounds of torque. All this power for this vehicle, turned out to be a pretty quick 0-60 of 9.5 seconds. Also, the 429 was designed to be more fuel efficient.
Special features of the 68 Thunderbird was the landau top, which made the car appear to be a convertible. This was the first year ford did not offer the Tbird in a convertible, so it gave an option of having the apperance of one. This was a popular option, almost as popular as the 429 engine. Another cool feature were the popup headlites. Lowbeams are the 2 far apart lights, and the high beams are all four lites. The switch for the highbeams is on the floor, near the e-brake. It's a cool feature like the horn, not in the steering wheel, but it is a metal bar that goes inbetween the center of the steering wheel and the actual steering wheel itself. it's hard to visualize, look at a picture of it lol! Some more cool features are it does not have a passanger mirror, which people get a kick out of lol. Some other features are the side lights near the front bumper, they were used to if a tbird was edging out of a corner, people could see it and not hit it.

What's your take on the 1968 Ford Thunderbird?

jstanm I have a 1968 thunderbird minus motor and trans...this was a project that never was finished, sell the rest of the car for parts, many spare parts and pictures if interested... jstanm@aol.com

Have you driven a 1968 Ford Thunderbird?
Rank This Car

How Do I Replace The Electric Window Control Switch

None of my electric windows will not work from the drivers control panel. The drivers window went down but want go back up. Do I just need to replace the motors and wiring harnesses? 1968 Ford Thun...

I have a 1968 Thunderbird Landau with only 70,000 miles, has suicide doors, all original parts, no rust, big block engine v8 of course. No here is the sweet part, it has bucket seat in the front, ...

Where Is The Best Place To Sell 1968 Ford Thunderbird Parts

Just bought a 68 T-bird. I don't see a parking brake release. Can someone tell me where it is or how the parking brake gets released. Frank