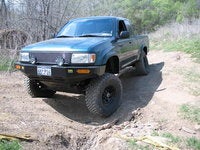 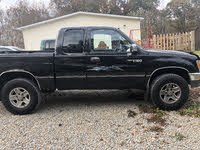 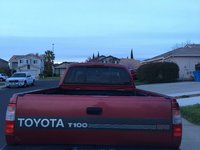 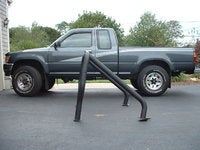 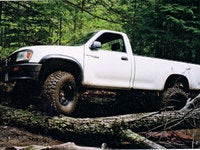 1998 Toyota T100 about a week ago, it felt like a few cylinders missed at normal highway speed. Yesterday I drove about 30 minutes. Stopped at a light and it shut off. Turned off the switch, it cran...

How Long Does It Take To Replace The Fuel Pump

how long does it take to replace the fuel pump in general?

What Is This Part Called?

This hose is leaking and causing my car to smoke

When I start into a curve. The truck tries to go straight. I barely turn the steering wheel it sort of jerks a little. But goes on through the curve fine. Any ideas what's causing it.

How Does The Neutral Safety Switch Come Off. I Have The Bolt Off And The Nu...

how does the neutral safety switch come off.

The T100 was introduced in 1993 to compete with full size pickup trucks like the Ford F-150 and the Dodge Ram. However, sales were only ever a fraction of what the competitors were selling.

The T100 had a number of issues that diminished its appeal for those shopping for a full-sized truck. Even though it was much larger than the Tacoma, the T100 was significantly smaller than other full-sized trucks on the market. In addition, it was never available with a V8, and the first generation was not available with an extended cab.

Toyota addressed complaints by offering an Xtra cab model, and by increasing the engine size, but the T100 still suffered from slow sales. What it lacked in size, however, it made up for in speed and agility.

The T100 was the last pickup that was built in Japan and sold in North America. The T100 was discontinued in 1998 to make way for the Tundra.