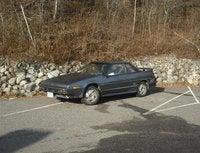 The most aerodynamic car in the world. Or so the Subaru XT was billed when it debuted in 1985 in the U.S. Rejecting the rounded lines of previous cars, this 2-door sports coupe was all sharp angles and wedges, a design which was meant to improve aerodynamics and therefore enhance performance and handling. Even the door handles were flush and could only be accessed by tapping a retractable panel.

The XT was part of the Alcyone lineup and came in three trims -- DL, GL, and GL-10. Originally offered as either front-wheel or on-demand four-wheel drive, it switched to permanent all-wheel drive in 1987. Two engine choices were available, either a 97-hp flat-4 or a turbo version at 111-hp. Still not that exciting for a sports coupe, so in 1987 a new 145-hp flat-six appeared as the XT6.

The XT was well appointed for a sport coupe, offering a lot of standard power features, sport seats, and only one sweeping front wiper. The interior was arranged like a cockpit, with pod gauges. Other innovations for the time were a trip computer, digital dash display, and adjustable suspension height. The instrument cluster was attached to the tilt steering so that it moved with the wheel, to maintain visibility.

The XT never delivered enough performance to become popular with the racing crowd and was replaced in 1992 by the SVX, another sport coupe which fared poorly due to its larger and heavier body. A sporty, driver-oriented Subaru wouldn't really take hold until the Impreza WRX.