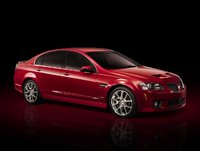 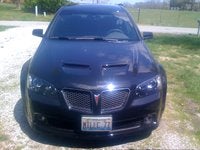 How Do I Want To Be Paid For My Car?

I meant to link my bank account but made a mistake now my listing says cash. I need to change it.

I am getting a barely used 1-5,000 mileage G8 but cannot decide between the GXP or GT trim. Is it worth the extra dough? I know it has the LS3 corvette engine but i could easily just add to the GT to...

Why Is My 2008 G8 Is Chugging/sputtering When I Am Driving Down The Highway...

I am currently driving my 2008 g8 down the highway going 60 and it is inconsistently chugging/sputtering. Why is this?

115 views with 6 answers (last answer about a year ago)

On this G-8 when I excel on the pedal, the right rear side will make a thudding noise that will not be heard again in till I stop and excel again. If I'm stopped and I excel slowly, this thudding nois...

Pontiac is GM's performance division, and in the last few years it has tried to reinvigorate that image with a rebranding strategy that focuses on a high-output driving experience, without sacrificing personal comfort. Part of that strategy includes the phasing out of the old stalwart Grand Prix and replacing it with the all-new Pontiac G8, a sports sedan that was introduced at the 2007 Chicago Auto Show.

The G8 is Pontiac's first rear-wheel-drive sedan since the 1986 Bonneville, and is the first indication that Pontiac means business, as rear-wheel-drive cars allow for bigger, heavier, more powerful engines.

Rather that creating the G8 from the ground up, GM decided to import 50,000 Holden Commodore sport sedans, built by GM's Australian division, and rebadge them as the G8. That enabled GM to freshen up its lineup in record time. The Commodore has been the most popular car in Australia for more than a decade, and was recently named Car of the Year by one of the Australian automotive organizations.

The Commodore/G8 is built on the Zeta platform, and is the first car in the U.S. on this platform. It is shorter than the Grand Prix and will have a wheelbase 6 inches shorter than the Dodge Charger's, which it most closely resembles. Design features of the G8 include front fender vents, front foglights, distinctive hood scoops, projector-beam headlights, and a dual exhaust system with chrome outlets.

For 2008, the Pontiac G8 is available in base and GT trims, featuring a 261-hp V6 or an even more impressive 362-hp V8, respectively. The V8 shuts down half its cylinders during low-load driving to boost fuel economy. The GT is equipped with a six-speed automatic transmission.

The interior is luxuriously appointed, with full power features, a seven-speaker audio system with an MP3 input jack, six standard airbags, standard satellite radio, and OnStar. Leather is an option for both trims, and a Sports Package will beef up the standard 18-inch wheels to 19-inchers, add a stiffer suspension, and attach a rear spoiler.

The new Pontiac G8 is scheduled to be in showrooms in early 2008.