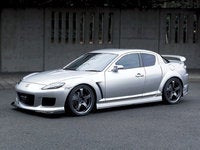 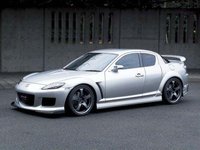 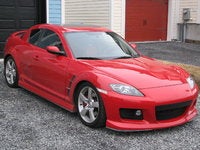 8 views with no answers yet
5

How Fast Can It Get Up To?

How Many Rx8 40th Editon Were Made?

I just want to know how many came off the line?

hi i am in need of some advice be for i think of an engine rebuild . I just bought an rx8 as a none runner the bloke i had it from is a car dealer an he got the car of a friend it came in as a part e...

When it was introduced in 2004, the Mazda RX-8 four-seat sport coupe had a lot riding (so to speak) on its 18-inch wheels. It was the successor to the RX-7, which was probably the most memorable and iconic car Mazda has ever made. And although the RX-8 hasn't quite developed the buzz that surrounded the RX-7, it's certainly a worthy 21st century standard-bearer of the RX name.

In fact, the RX-8 is a true descendant of its automotive ancestors, since like the RX-7, as well as Mazda's other RX cars, such as the RX-2 and the RX-3 (both produced in the 1970s), the RX-8 is powered by a rotary engine - in this case, a small, super-lightweight engine called the Renesis. Mazda notes that the Renesis engine is smaller than the car's transmission, yet the 2007 model produces 232 horsepower (212 with the Sport AT automatic transmission) and provides plenty of power under the pedal (torque) through the power range.

Mazda notes that its 1.3-liter Renesis rotary engine has no pistons or valves, but instead consists only of two rotors and a crankshaft that continually rotate inside a housing to create combustion. As a result, the engine gives off a distinctive hum, rather than the typical sound of an internal combustion engine.

In its first year, the RX-8 was available as a solitary model available with either a six-speed manual or a four-speed automatic transmission. Standard features included power windows, power door locks, air conditioning, antilock brakes, a CD player, and front, side, and curtain airbags for the driver and passenger.

In 2005, Mazda added a Shinka edition to the RX-8 lineup. It was equipped with leather seats and antilock brakes, among other features. In 2007, the lineup was revised again to include three trims. The entry-level Sport package included air conditioning, cruise control, a leather-wrapped tilt steering wheel, and antilock brakes, while the mid-level Touring package added Xenon headlights, a day/night rear-view mirror, and Dynamic Stability Control with traction control. The top-of-the-line Grand Touring version came with such features as heated leather seats, an advanced keyless entry system, heated exterior mirrors, a power sliding moonroof, and a nine-speaker Bose premium audio system.

Drivers and reviewers alike agree that the RX-8 is an agile, well-balanced, comfortable, and stylish four-seat sport coupe, and many consider it to be among the best vehicles on the road.