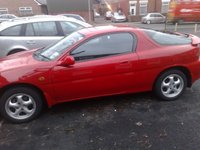 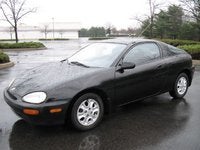 198 views with 2 answers (last answer about a year ago)

I have a substantial amount of water leaking into my car's driver's side. I am unable to discover if water is coming through the window and down through the door, or if it is coming in from a wheel w...

When Starting My 92 Mazda Mx3, It Takes 5 Sec Before Spark Gets To Plugs.ha...

Please help just got it spent everything on it. Repair shops just say keep replace parts till something works. Its my only thing to drive. I have to have it because of grand baby cerebral palsy and...

Abraham answered 7 minutes ago I just bought these car he was sitting for two years the card was starting and running but with some forwards feels like it was in getting enough gas he only does that...

Mazda seems to have had quite a bit of success with its quick, nimble sport coupes, such as the RX-7 and the MX-5 Miata. Another example was the Mazda MX-3, a two-door hatchback that wasn't quite as well-known or as popular as its widely known elder siblings but was nevertheless well-loved by those drivers who discovered the car. In fact, drivers used such words as awesome, excellent, exciting, gorgeous, perfect, and cute to describe this car. That's what you call devotion.
Throughout most of its short run, the MX-3 sports coupe was available in both a Base version and a more powerful GS model. Initially the Base MX-3 came with an 88-horsepower, 1.6-liter four cylinder engine, but in 1994 that was bumped up to a double-overhead-cam four-cylinder that pumped out 105 horsepower.
The real story, however, was the GS version, which came with a 1.8-liter V6. It was the smallest V6 engine available in the industry, but provided plenty of power under the pedal throughout the range to drive the car sharply through the corners and breezily down the open highway. And drivers noticed. With the back seat folded down, the cargo area of the MX-3, accessed through the hatchback, was roomy enough, but this wasn't a car for carrying cargo. It was a driver's car. And for most of its fans, that was enough.
In fact, many bemoaned the fact that Mazda stopped selling the car in North America after only four years. But the cars still remain popular in the resellers' market, and even high-mileage MX-3s are still considered to be reliable, desirable cars.