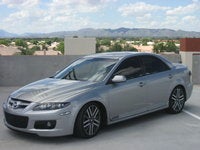 I've checked the fuses, battery and cables. Not sure why it won't start. Security light on the door is on.

There speed6 for sale that has 161miles and asking for 3200 I have 4500 to spend on used car or putting down payment my questions I was thinking of putting money away to engine swap when that moto...

Noise On Take Off

I have replaced the engine in my 2006 Mazdaspeed 6, on take off I hear a sound like when growing up we would clothes pin a piece of card board to the front fork of a bicycle to get engine sound. Th...

My car was hit by another car going in reverse when I was in park. It was just a tap but my car now has a small dent and some bad scratches on it. Would I paint over it or fully repair it or what?

Fans of aftermarket and tuned vehicles will be happy to know that Mazda has inserted just such a vehicle into its regular production lineup. Tricked out by MAZDASPEED, Mazda's in-house motorsports and specialty-car tuning division, the MAZDASPEED6 follows a short list of other specially tuned Mazda vehicles to the U.S. market, including the 2003 MAZDASPEED Protege and the 2005 MAZDASPEED MX-5 Miata.
The MAZDASPEED6 starts with the popular and critically acclaimed Mazda6 Sports Sedan and adds both exterior and interior enhancements, as well as more power under the hood. The exterior features a more muscular look, with a sculpted hood that rises to provide room for the engine's top-mounted intercooler, and an air duct for the intercooler integrated into the front grille. In the rear, a spoiler and more aerodynamic bumpers provide an aggressive look.
Inside, standard features include high-bolstered front bucket seats, automatic climate control, front side window demisters, power door locks, leather-wrapped steering wheel and shift knob, alloy pedals, and a Bose seven-speaker audio system.
But the real action takes place under the hood, where a turbocharged 2.3-liter double-overhead-cam four-cylinder engine produces 270 horsepower, thanks in part to direct gas injection that delivers fuel directly into each chamber. The standard transmission is a six-speed manual with gear ratios that perfectly match the engine's power curve, according to the automaker.