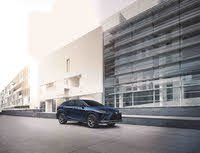 SEVERAL LIGHTS CAME ON AFTER MY BRAKE JOB. WHY?

AFTER THE FRONT ROTORS AND ALL FOUR PADS WERE REPLACED, SEVERAL DAYS LATER THE THREE LIGHTS LISTED CAME ON. WHAT WAS WRONG? the three lights were VSC SYSTEM, BRAKE LIGHT, AND CHECK ABS

Passenger Side Mirror Unfolds Too Far

The mirror travels all the way forward every time car is started. Have to manually swing back to usable position. Happens whether the control in on auto or manual. How do I reset it?

Im Thinking About Buying An Rx300 With High Miles....

this car has been maintained and in great aesthetic condition. The only real problem is it has 193,000 miles. Ive never owned a car that has high miles before but Im pregnant and have to upgrade to a...

I have a 2003 LEXUS ES 300 and my knock sensor harness went missing after I had taken the car into repair shop to have struts changed will it harm engine if I drive it I notice the rpm is higher t...

Speakers Not Working When It Rains

My car speakers make a loud "boom boom" when i turn on the radio and then no sound is coming out. This would only happen when it rained during summer but now that winter is coming the problem seems to...

Since its debut in 1989, the Lexus lineup has steadily risen to become the best-selling line of luxury automobiles in the world. The brand is the luxury vehicle division of Japanese automaker Toyota and has become a status symbol for wealthy Americans.

But Lexus vehicles aren't designed to sit in a garage for display to friends and admirers. The cars are built to be driven and have a string of performance- and comfort-enhancing features. The brand is particularly noted for its reliability and best-in-class customer service.

The idea for Lexus was born in 1983 when Toyota Chairman Eiji Toyoda summoned a secret meeting of company executives and asked, Can we create a luxury vehicle to challenge the world's best? Toyota embarked on a top-secret project, codenamed F1, that resulted in the launch of Lexus in 1989.

Since then, Lexus sales have steadily increased. The company spent a decade selling its first one million cars. It took just four years to sell the next one million Lexus vehicles.

The smallest of the fleet are the Lexus IS vehicles. While Lexus claims the initials stand for "Intelligent Sport," some Lexus customers like to joke that its stands for "Is Small" (for a Lexus, of course). These vehicles first made the scene in the States in 2000 after a 1998 Japanese debut.

Lexus has an impressive selection of midsize sedans, including the Lexus ES 250, ES 300, ES 330, ES 350, GS 300, GS 350, GS 400, GS 430, and the hybrid GS 450h. The ES vehicles share a common platform with the Toyota Camry, but have many of the finer appointments consumers have come to expect from a Lexus. The GS is a slightly sportier version, designed to fill the gap between the entry-level midsize ES cars and the significantly larger LSs.

The LS models represent full-size sedans for Lexus, and include the Lexus LS 400, LS 430, and LS 460. These are considered the flagship models for Lexus and the ones most likely to be called "a Lexus," as in, "Cheryl thinks she's big-time now. She just bought a Lexus."

Of course, to look extrememly cool, one may want to purchase something from the Sports Coupe line, which includes the Lexus SC 300, SC 400, and SC 430. This set of rear-wheel-drive cars has drawn a loyal following to its superior acceleration, comfort, and style.