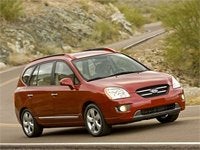 Hi there, my wife just called from a trip and she's stuck at our grandpa's. She says she puts the key in the ignition, and it won't start, even though the lights, radio, etc. work. Any suggestions????

no matter what position they are in the interior lights go on and off with the headlights.

I own a 2011 KIA Rondo EX mini wagon with an original radio single CD player unit. Bought it used with a lot of km use (now 220,000km). The CD player part of the unit is faulty. It often will not...

Drivers door is stuck closed because inside and outside door handles no longer open door .don't know how to fix without taking to dealership and spending money

159 views with 1 answer (last answer about a year ago)

Debuting at the 2006 Los Angeles Auto Show was Kia's new crossover wagon, the Rondo. Featuring up to three rows of seating, the Rondo shares a platform with the mid-size Optima sedan. Available in two trims, it comes well loaded, with its stand-out feature being its emphasis on safety.
Six airbags, ABS brakes, and stability control are all standard on the Kia Rondo, as is a handy tire pressure monitor.

Its closest rival is the Mazda 5, though the Rondo is slightly shorter. And where the Mazda 5 has sliding doors, the Rondo has conventional front-hinged doors. This makes access a little harder, but the Rondo compensates by making the doors longer. Both second and third rows fold flat, and the second row also reclines. Two trims will be offered, an LX and a sportier EX that sits on larger wheels and comes standard with roof rails, steering wheel controls, MP3 capability, and cruise control. Both are available with either a 162-hp I4 or 182-hp V6. Only an automatic transmission is available.
Kia focuses on low prices, high safety, and its famously attractive warranty, and all of these are present in the Rondo crossover. Even though its full name sounds like a member of the Rebel Alliance, its shrunken minivan looks are really down to earth.