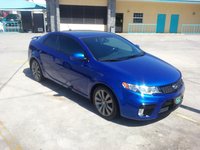 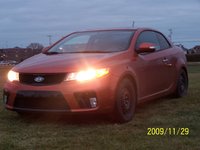 Has Anyone Seen This Prob.. Thinking Of Buying This Car

is this a deal breaker? disabled 60+ guy, not a lot of money or handy. starts

while driving the engine randomly shut off

Wrong Car And Details On My Listing ?

Hello, Reaching out again as now the correct pictures are attached to my car but someone else's info....the car details are not what a wrote and do not match my car. Hoping you can help

This is the second time I've had this issue with my 2013 Kia Forte Koup SX. I have a remote start button on my key fob, and both times I tried pushing it to start and the lights, radio, etc. came on...

Kia's design renaissance continues with the Forte Koup, which made its debut in 2010. Based on the Forte sedan and drawing some of its contemporary styling cues from the Kia Soul, the Forte Koup displays fluid lines, an aggressive stance, and a low, sleek profile.

Large air intakes and swept-back wrap-around headlights create a bold look up front, while a rear diffuser, narrow taillights, and dual exhaust pipes finish off the rear end in style. In overall height and length, the Forte Koup measures slightly shorter than the sedan on which it's based. However, the Koup borrows its underpinnings from the sedan, as well as interior components and engines.

Initially, Kia offers the front-wheel-drive Koup in EX and SX trims. Each comes with a different powerplant. A 156-hp, 2.0-liter four-cylinder drives the EX trim, while the SX receives a larger 173-hp, 2.4-liter four-cylinder. In the EX, the engine links to a five-speed manual transmission, while the SX comes equipped with a six-speed manual shifter. The fuel-efficient Kia Forte can eke out up to 34 mpg, depending on its engine and transmission configuration.

Kia tuned the Koup's suspension for a firm, sporty ride. According to early reviewers, the front-wheel-drive compact coupe delivers a smoother ride with better handling than many of its competitors.

The two-door Koup seats five in its roomy cabin, and comes well-equipped upon its debut, with such features as sport seats with side bolsters, Bluetooth, remote keyless entry, and Sirius satellite radio on the standard feature list. Options include leather seating and heated front seats. Performance and safety features include electronic stability control and antilock brakes.

With its sporty exterior looks, well-equipped cabin, and relatively low pricing, the Koup should be competitive in its automotive segment. Early owners give the Forte Koup very high marks, although some find the sport-tuned suspension a little rough at times.