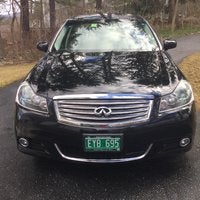 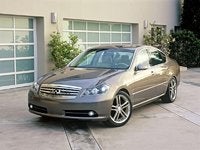 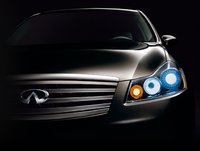 I'm looking for the location of the transmission speed sensor. Had the the car on ramps and looked all over for it and can't find direct answers online. Recently replaced the camshaft and crank sha...

Can I trade my car in and still owe 9k on it .. (needs alternator)

I purchased pumps online and autozone it doesn't match any Suggestions

When is it that a 2007 infinity m45 sport would start to have transmission problems?

Introduced in 2003, the Infiniti M45 was the first luxury midsize sedan Nissan marketed in North America. Designed to compete with offerings from Lexus, BMW, and Acura, the M45 caught on with its 2005 retooling; the emphasis moved from size and plush interiors to high-tech comfort and a wonderland of gadgets.

Of course the Infiniti M45 has adaptive cruise control, power everything, a high-end Bose audio system, and all the safety features the most neurotic driver could wish for. As of the 2006 model year, the M45 has been Bluetooth-enabled, which makes it a favorite of Silicon Valley types as well as computer-minded tuners.

Another selling point of the Infiniti M45 is its muscle-car engine, a 4.5-liter V8 with an output of 325 horsepower and 336 lb.-ft. of torque. Its automatic transmission has manual shift control, which gives added responsiveness (as does its available four-wheel steering).

Bottom line on the Infiniti M45? It's got a lot of oomph for a luxury sedan, but lacks the strong brand identity of competitors like the BMW 5-Series or the Lexus GS. And if you're considering a Cadillac instead, you may be swayed by the M45's high-tech features.