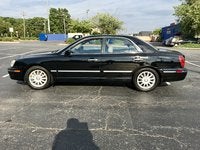 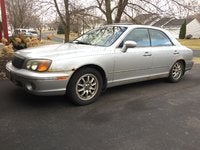 Down To One Code P1118 No Other Codes

replaced TB, TBS, TB Motor, APS now what? Checked fuses. Scanner shows all O2's are working. Cleaned TB. Cleaned all connectors at TB. Car is stuck in limp mode. Pulled the ECU and sent it to b...

'02 Hyundai XG350 Starter Will Not Actuate

'02 XG350 will not turn over. The starter spins when crossed over, but when using the key, it will not activate starter. Has new battery, new starter & solenoid and new ignition switch. Friend g...

Video On A Xg350 Of Pull Out Moter

I have a 2004 hynduai xg350 I think an L model I have no idea how to tell. I keep getting mixed messages that it has a spin on filter and an internal transmission filter when pan is dropped. Does...

Repair For The Control Of Steering

My 2004 hyuandai steering all the sudden broke. I don’t know how to fix this. My steering wheel almost like sticks turning to the right and is very loose turning to the left. A bolt fell onto the gr...

And you thought Hyundai was just a good college-grad car. As Hyundai's reputation and respectability grew, so did its cars and standard features. The midsize Hyundai XG350 represented the Korean automaker's foray into luxury sedans, offering many of the same features (if not more) available on the more highbrow Mercedes and BMWs of the world. It first appeared on the scene as the XG300, when it had a 192-hp, 3.0-liter Sigma V6, but in 2002 changed its name to the XG350, with an engine upgrade to a 194-hp, 3.5-liter V6.

What made the XG350 stand out for consumers was its ability to offer first-class creature comforts at economy-class prices, coupled with Hyundai's innovative 10-year, 100,000-mile warranty. Comparable in size to the Maxima, the XG350 came as either a base model or more luxurious L. For a lot less than its German counterparts, the XG350 packed in leather seats, power front seats, a CD player, and front and rear climate controls. Moving up to the L added a sunroof, heated seats, and memory settings. There were few changes to the front-wheel-drive sedan over the years until its demise in 2005, the most significant of which was the addition of a CD changer. With plenty of legroom and actually more headroom than its competition, the XG350 seated five passengers comfortably in two roomy rows, with an average-sized trunk.

Consumers were impressed with the XG350's luxury trappings, but its smooth performance and V6 power were equally surprising. By bringing a bit of upscale comfort to the masses, Hyundai expanded its customer base, added more cachet to its name, and started to give the bigger boys something to think about. In 2006, the XG350 name was dropped and the sedan was repackaged as the Hyundai Azera.