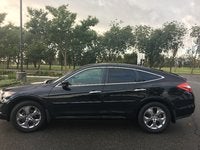 My 2010 Honda Accord crosstours 4wd stopped working there are no light on the dash it didn’t and isn’t making any strange sounds it’s just not working at all. Does anyone know what this could be

368 views with 6 answers (last answer about a year ago)

I used 87 octane gas and now my car looses power when pulling off and stalls. The check engine light came on and I had the sensors replaced but it still rides rough. Any answers to my problem.

I have a 2010 Honda Accord Crosstour. It recently started running hot. I never let it get to the point where it cuts off. I always park it and let it cool off. Learned this from a previous car. I h...

Windows And Sunroof Open When Car Is Parked

3x's now, approx. 2 months apart- once in my driveway and twice in parking lots when I return to my car, the windows are all down and sun roof is open. I do not want this to happen in the rain or snow...

How do I take my car off the list if I want to? What do I owe car gurus to sell. Do I owe CarGurus if it does not sell

Introduced in 2010, the Accord Crosstour holds a unique position in Honda's lineup, becoming the automaker's first Crossover Utility Vehicle, or CUV, and launching a new automotive segment. The Crosstour combines attributes of a sedan and an SUV, resulting in a smooth, capable ride, quick handling, and a versatile cargo space.

Taller, wider, and longer than the standard Accord, the Crosstour shares its underpinnings, some of its exterior design, and most of its interior features with its stablemate. However, the Crosstour also departs from the standard Accord, thanks to such distinctive features as its sloped rear roofline, bolder front grille, textured rocker panels, and heavier rear end, which has generated some controversy. In addition, the Accord Crosstour comes equipped with a rear tailgate, which gives owners access to the cargo area. Other SUV-like features include under-floor storage areas and reversible cargo-area floor panels.

Inside, the Crosstour seats five passengers, with plenty of legroom and headroom, despite its sloping roofline. Upon introduction, Honda offers the Crosstour in two trims, as well as with a choice of front-wheel or all-wheel drive for the upper EX-L trim. Honda introduces a few innovations on the Crossover, including a reflection-minimizing screen coating for the optional navigation system and an audio system with Active Sound Control, which uses the sound system to cancel certain types of engine noise for a quieter cabin.