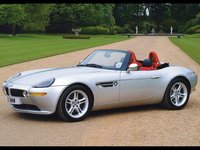 There Has Been No Activity For Over A Week. What Should I Be Doing? Bob

For a car that had such a short shelf life - BMW only produced the Z8 from the 2000 to 2003 model years - the Z8 certainly got around the world of pop culture. In addition to appearing in "The World Is Not Enough" as the final installment of a three-film product placement deal with the makers of the James Bond movie, the convertible "supercar" was featured in several video games.

The car sold for more than six figures and with good reason: it had an all aluminum chassis and body and used a 4.9 liter, 32-valve V8, which propelled the vehicle with 400 horsepower.

The Z8 held BMW's production car performance records for several years, but struggled to gain praise from drivers and automotive journalists praised the car. One reviewer described the car as having "terrible handling and being an example of a car that never knew what it was supposed to be (supercar or roadster)."