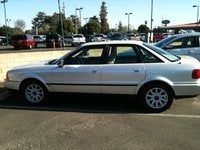 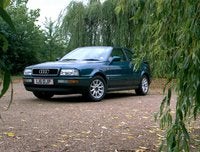 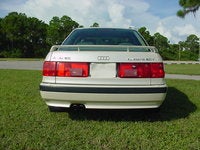 94 Audi Won't Start After Getting Fuel

I have a 1994 Audi 90 CS. It has always ran great. Yesterday, I stopped to get gas. When starting the car at the pump, it spit and sputtered and died and now won't start. Based on smell, I do believ...

Have just bought this car and there are 2 things wrong with it. Radio is in 'safe'mode and I do not have a code. Vacuum leak. Don't have a lot of money to spend taking it to a Audi dealer. Am thinkin...

I have a 95 Audi 90. My car will not start thought it was my battery but was wrong my fuel pump does humm when key is turned I get fuel threw my injecters. Car will start with starting fluid until...

Some say that the name Audi is a Latin version of Horch, the last name of Audi's German founder. Literally meaning "hark," Audi's name has since become synonymous with reliable, high-performance luxury sedans that are more affordable than those of its German counterparts.

Initially packaged with the Audi 80 as a more upscale version of this starter sedan, the Audi 90 took over the brand in 1993. The four-door family car was offered as either a front-wheel drive or AWD quattro sedan. Audi's quattro technology was the first AWD to be put into a performance car, and it proved very successful, producing stylish, sporty cars that were much more stable and firm, with better handling and control. Light, precise steering and maneuverability made Audi a pleasure to drive. Adding on standard features such as power driver's seat, cruise control, a ski bag in the trunk, power sunroof, leather seats and trim meant that owners got a lot more than what they paid for.

The Audi 90 is also durable. Even today, used cars barely hint at their age due to a well-designed interior and Audi's galvanized zinc coating that protects against rust and paint wear. Owners have nothing but adoration for their Audi 90 and its seamless blend of comfort and style, luxury and practicality. The cost of maintenance and repairs is astronomically high, as with all German-made cars, but this seems to be the only major complaint about the Audi 90.

For an upscale family car that will get you where you want to go with a little extra style, comfort, and performance, the Audi 90 can't be beat. In 1996, Audi went through a renaming and the popular 90 became the Audi A4.