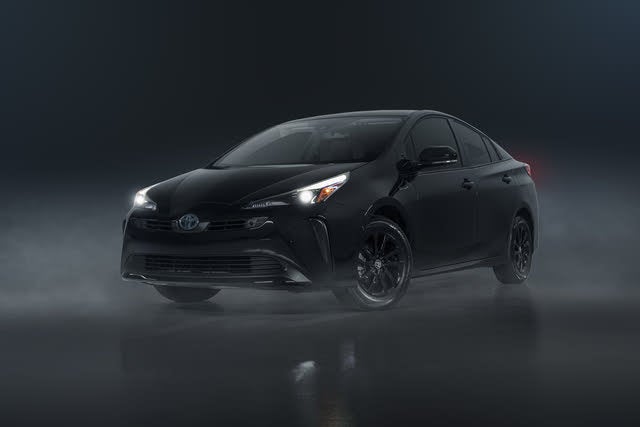 Looking for a New Toyota Prius in your area?

The Toyota Prius can be credited for starting the hybrid vehicle craze here in the United States, but it’s not the frumpy, granola-munching, left-lane hogging car it used to be. Toyota has continued iterating on the Prius concept to the point that it’s now a futuristic-looking cruiser with tons of tech and available all-wheel drive (AWD). Though the standard Prius is a carryover from 2021, the 2022 model will be offered in Toyota’s blacked-out Nightshade special edition for the first time.

The new Prius will be available in a Nightshade special edition model, which brings black wheels and darkened badges outside. Inside, the cars will get Softex upholstery, heated seats, and gloss-black trim. Toyota says that the Prius is its eleventh model to get the Nightshade treatment, and notes that the Prius is the first hybrid model to join the family.

The standard Prius will be offered in L Eco, LE, LE AWD-e, XLE, and XLE AWD-e, and Limited trim levels. The cars will be powered by a 1.8-liter four-cylinder engine and two motor-generators that send power to the front or all four wheels through a continuously variable transmission (CVT). Output should be the same as the 2021 model, which puts the 2022 Prius at 121 horsepower.

The Prius’ liftback shape affords plenty of cargo space in the rear. Toyota says that the cars will deliver 50.7 cubic feet of space, which rivals and even beats the space offered by some compact SUVs. Technology and infotainment duties will be handled by a standard 7-inch touchscreen, which will run Apple CarPlay and Android Auto, and come with a WiFi hotspot, six speakers, Bluetooth, and three USB ports. A larger 11.6-inch screen comes in higher trims, along with a JBL sound system and navigation.

Toyota hasn’t announced pricing or release date details for the 2022 Prius yet, but we expect it to start landing on dealers’ lots in late 2021.

Have you driven a 2022 Toyota Prius?
Rank This Car

Enter your zip to see incentives for a new Prius in your area.