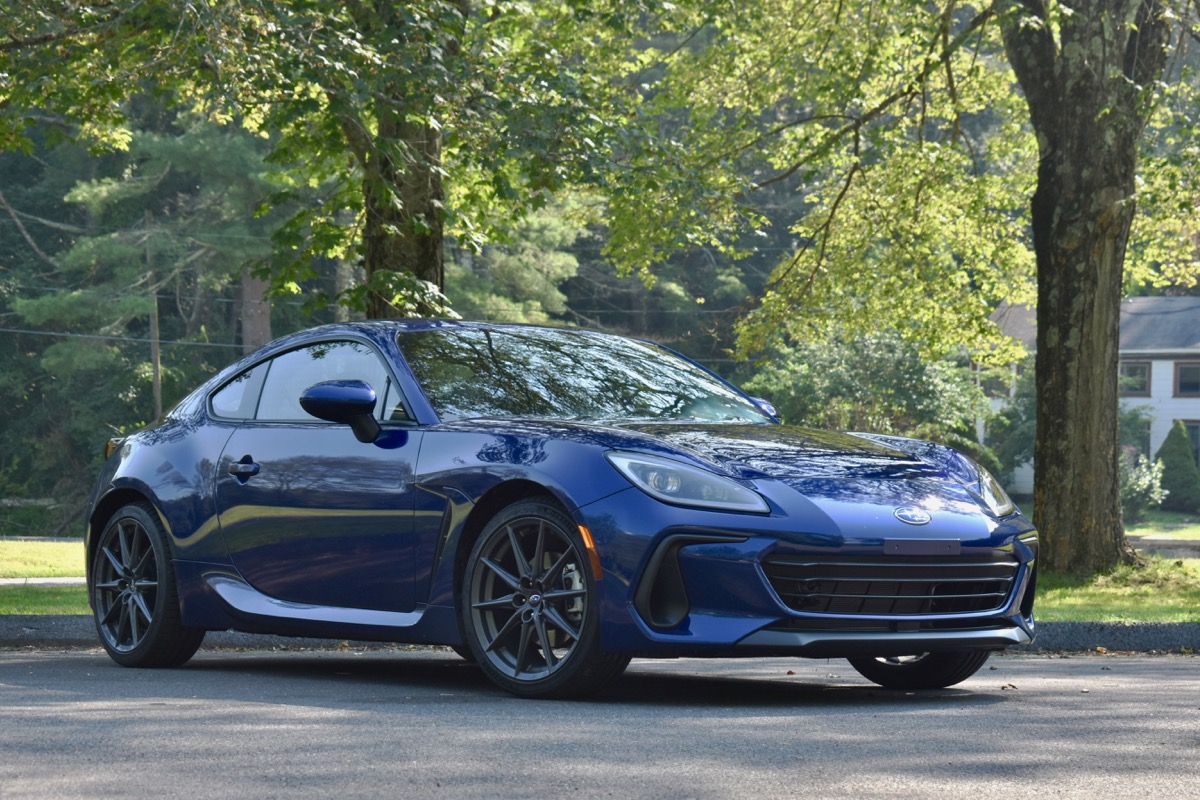 Looking for a New Subaru BRZ in your area? 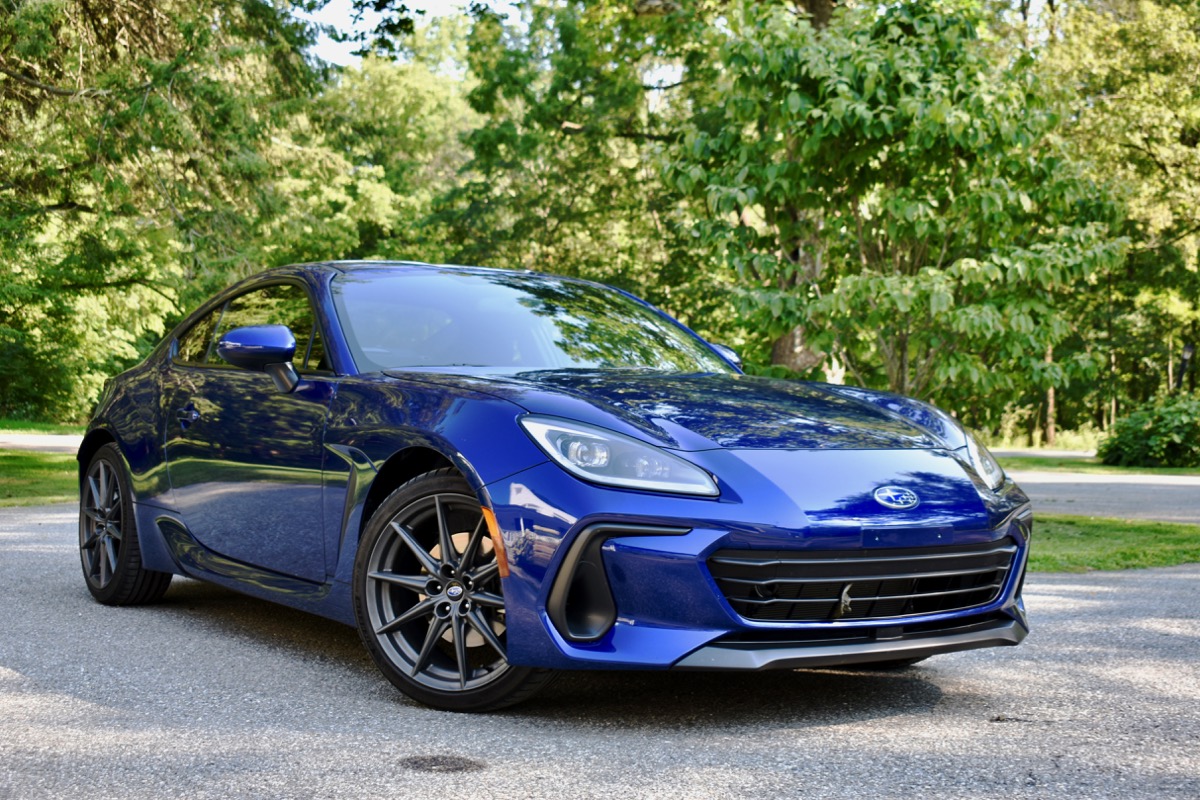 Subaru performance has traditionally boiled down to three letters: WRX. But for almost a decade, Subaru fans have gotten familiar with another three-letter code: BRZ.

The Subaru BRZ is unlike anything else in the automaker’s lineup. Subaru is known for building practical cars with all-wheel drive (AWD) and turbocharged engines, but the BRZ throws all of that away. It’s a willfully impractical two-door coupe with rear-wheel drive (RWD) and a naturally aspirated engine, aimed at providing the most satisfying driving experience.

The first-generation BRZ was introduced as a 2013 model, so the sports car was due for a redesign. The 2022 Subaru BRZ gets a restyled exterior and a more powerful engine, as well as more tech features than its predecessor. As before, the BRZ is twinned with a Toyota product. Its previous counterpart was the Scion FR-S; it's now the Toyota 86, which was renamed GR 86 as part of its redesign (and is covered in a separate review). Subaru is taking orders for the new BRZ now, but deliveries aren’t expected to begin until late October or early November.

Subaru keeps the 2022 BRZ lineup simple, with just Premium and Limited trim levels to choose from. We spent a day with the higher-tier BRZ Limited, driving it on winding Connecticut roads as well as the race circuit and autocross course at Lime Rock Park. 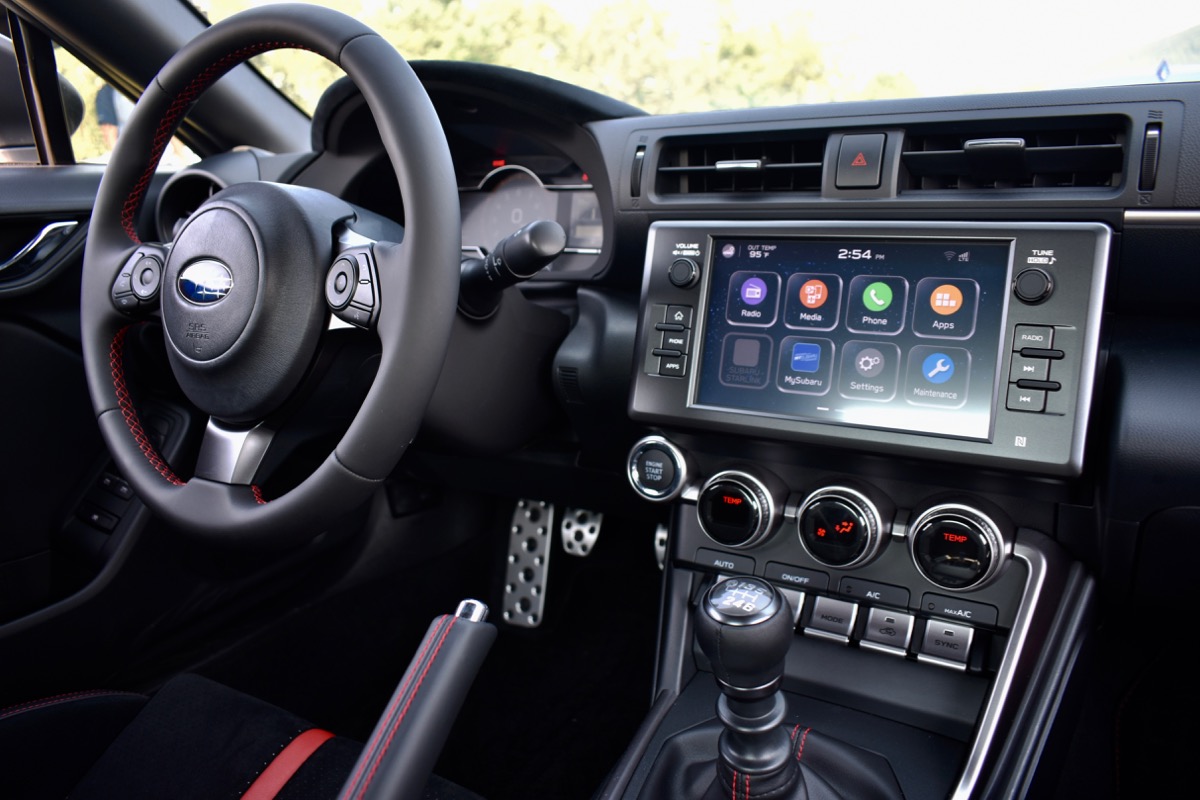 The BRZ (the name stands for “Boxer RWD Zenith,” by the way) remains nearly identical to its Toyota sibling, which is likely the only reason these two sports cars remain in production. Joint development helps spread out costs over more units, making a stronger business case for these niche vehicles. For the 2022 models, Toyota was primarily responsible for design, while Subaru was charged with engineering, BRZ product line manager Michael Redic said in a presentation ahead of our test drive.

Subaru and Toyota used an updated version of the previous-generation platform for these new models, but with different exterior styling. That includes model-specific headlights and grilles, along with new fender vents and taillights that are shared by both models. If anything, the visual difference between the Subaru and Toyota models has shrunk with this redesign.

The interior has the same all-business feel as before, with some new additions like digital displays and a large trio of climate-control knobs. In true sports-car fashion, the front bucket seats are heavily bolstered to hold bodies in place during aggressive cornering. Leather upholstery is standard, while Limited models get Ultrasuede with red accent stitching, and dual-mode heaters. A leather-wrapped steering wheel is standard on both trim levels, along with Brin Naub dashboard and door trim. 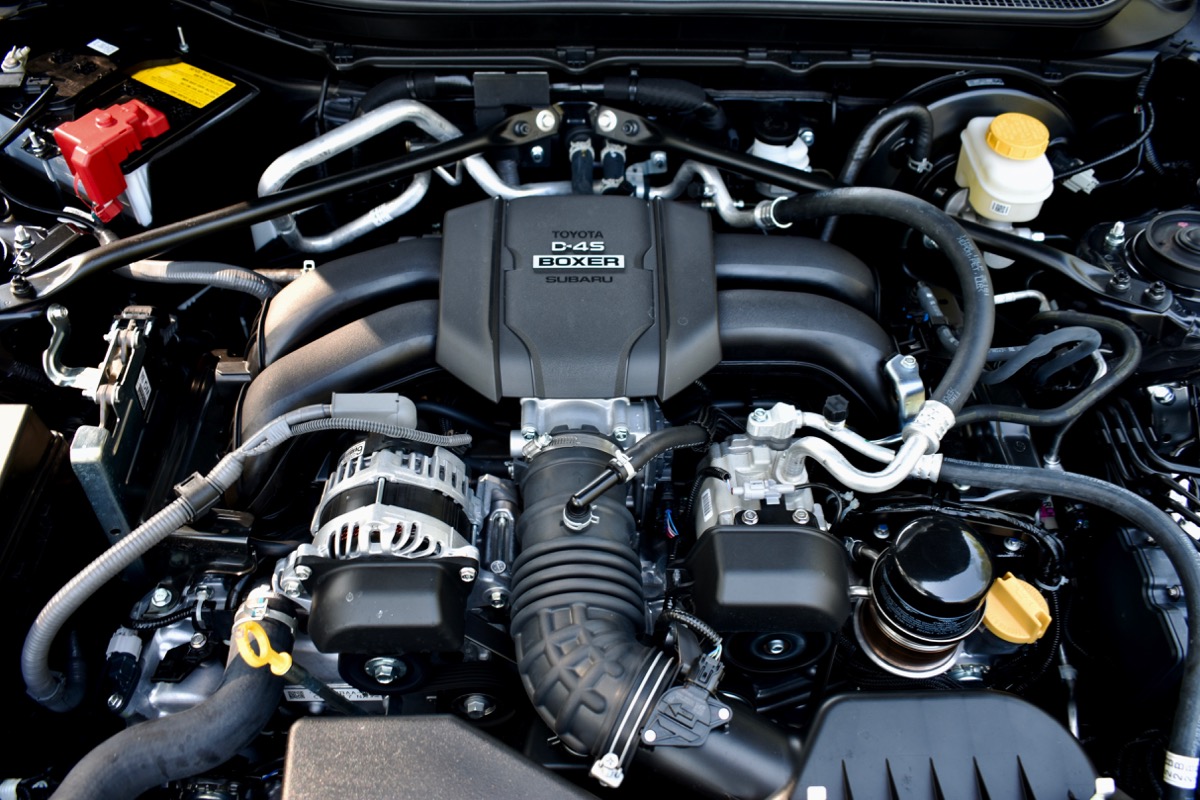 As before, the 2022 BRZ uses a Subaru boxer-four engine with Toyota’s D-4S fuel-injection system, which combines port and direct injection. The car retains its Torsen limited-slip differential, and transmission choices are unchanged as well, so the BRZ still gets a standard six-speed manual gearbox or a six-speed automatic (with paddle shifters). The automatic was retuned to downshift quicker and hold gears longer, while the manual got some tweaks to improve shift feel, according to Subaru.

The engine’s displacement has grown from 2.0 liters to 2.4 liters, bringing an increase in power and a lower torque peak. The new 2.4-liter BRZ engine makes 228 horsepower and 184 pound-feet of torque, up from the previous 205 hp and 156 lb-ft of torque. In addition, the new engine can still rev to 7,000 rpm, an advantage of natural aspiration over forced induction.

You won’t have to work the engine too hard to access that 184 lb-ft of torque, though. The 2.4-liter engine’s torque peak comes at 3,700 rpm, compared with 6,600 rpm for the old 2.0-liter engine, according to Subaru. That would normally require bolting on a turbocharger, but Subaru (and development partner Toyota) managed to make it happen while preserving the boxer engine’s free-revving character.

Subaru quotes zero to 60 mph times of 6 seconds with the 6-speed manual transmission and 6.5 seconds with the 6-speed automatic. Those are improvements of 12% over the old car, according to Subaru. Toyota quotes a 6.1-second zero to 60 mph time for the manual GR 86 and 6.6 seconds for the automatic version, but the gap is likely due to differences in each manufacturer’s testing procedures.

Both the 2022 BRZ and GR 86 use an updated version of the previous-generation cars’ platform. Subaru stiffened things up, though, claiming a 60% increase in lateral bending rigidity. That extra stiffness was gained through re-tuned struts and changes to the steering-box and suspension mounting points, including a body-mounted rear stabilizer bar that’s unique to the BRZ. Both Subaru and Toyota also applied their own individual tuning to the engine and suspension.

As with the GR 86, one of the standout differences between the 2022 BRZ and its predecessor was improved on-road manners. While the ride was still fairly firm, it was a bit more forgiving than in the previous-generation BRZ. The new car was also a lot quieter, even with an engine note augmented by an active-sound system that pipes noise through the in-car speakers. Overall, we’d be much more likely to take a long drive in this second-generation BRZ than in the first-generation model.

The old BRZ was a great car to drive, but the new one is even better. On the track, we appreciated the flexibility of the 2022 model’s low-end torque, and the car also felt tauter and more precise than its predecessor. We didn’t find the driving experience to be dramatically different from the GR 86, although the Subaru did feel a bit less tail-happy in corners. Still, the rear end provided enough rotation to get the car properly pointed for corner exit, and those so inclined will also find the Subie easy to drift. 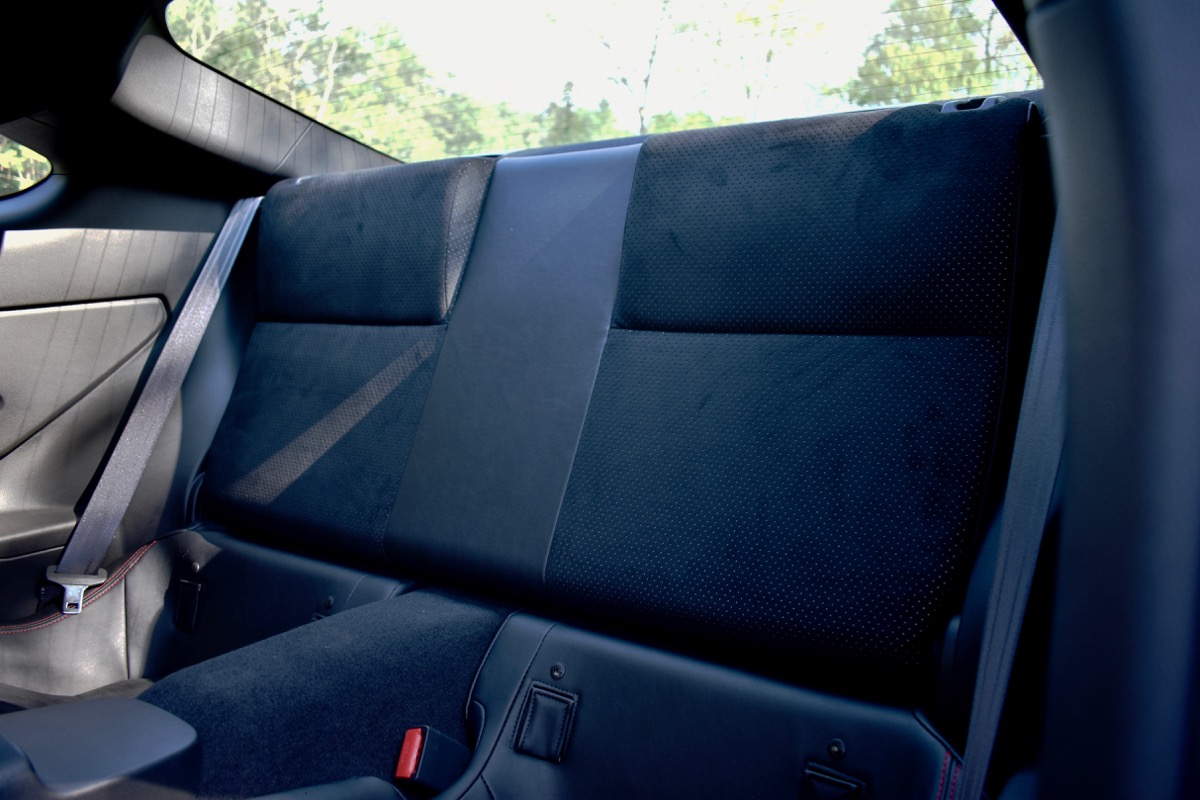 The carryover platform means the 2022 Subaru BRZ is dimensionally similar to its predecessor. The new car is 1.2 inches longer than the 2020 model, with a 0.2-inch wheelbase stretch. Width is unchanged, but the 2022 model sits 0.4 inch lower than before, bringing the car's center of gravity even lower than the previous version's.

The changes result in a marginal decrease in headroom. Despite the 2022 model’s longer wheelbase, front seat legroom also decreased by 0.4 inch. However, this car wasn’t designed to be a grand tourer. Its trim dimensions help keep the curb weight down and increase agility, albeit at the expense of passenger space.

With the back seats folded, Subaru claims the BRZ can carry four tires or a mountain bike. The automaker made similar claims for the previous-generation BRZ, but it’s not something we’ve attempted with either generation. If you’re buying a small sports car, you should be prepared to travel light.

We did like the look and feel of the BRZ’s large, chunky controls. Like the GR 86, the Subaru gets three large knobs with built-in digital displays for climate control, plus a row of buttons beneath them. The setup looked cool and was easy to use while driving. We also appreciated the BRZ’s low hood line and window sills, which aided outward visibility and made the cockpit feel surprisingly open for its size. 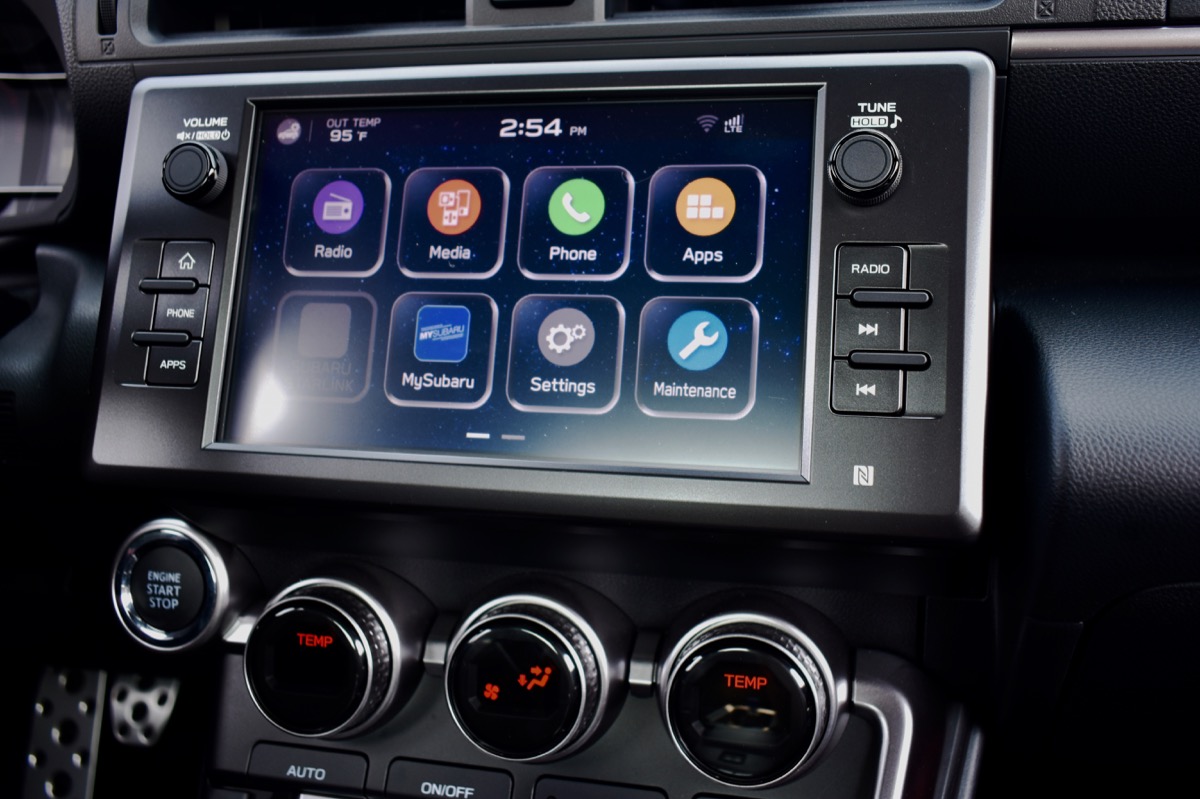 Like the related Toyota GR 86, the BRZ gets a major tech upgrade for the 2022 model year. A standard 8-inch touchscreen and digital gauge cluster replace the previous 7-inch touchscreen and analog gauges. Apple CarPlay, Android Auto, Bluetooth connectivity, and SiriusXM satellite radio are standard as well.

Subaru was quick to note that this touchscreen was developed in-house (it’s based on the head unit that debuted in the 2020 Legacy and Outback), but it doesn’t exactly provide a unique experience. As with the GR 86, the latest infotainment system is a big improvement over the old system and is fairly easy to use, but it isn’t the main reason for buying this car. Still, we liked the digital instrument cluster, which gives drivers access to sport mode and track mode. It put the tachometer front and center and managed to show a lot of information comprehensibly. 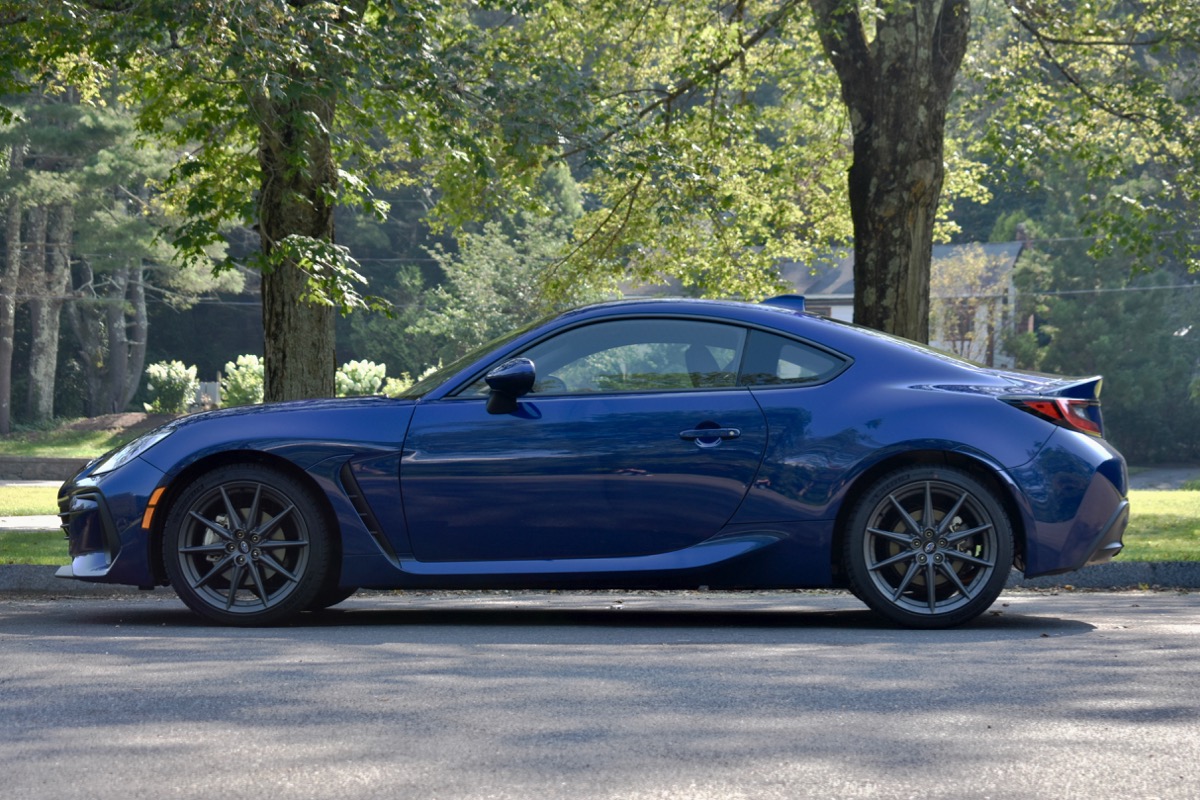 The National Highway Traffic Safety Administration (NHTSA) and Insurance Institute for Highway Safety (IIHS) haven’t released safety ratings for the 2022 BRZ yet. That’s typical of new models, but as a low-volume sports car, the BRZ likely won’t be a priority for the safety organizations. 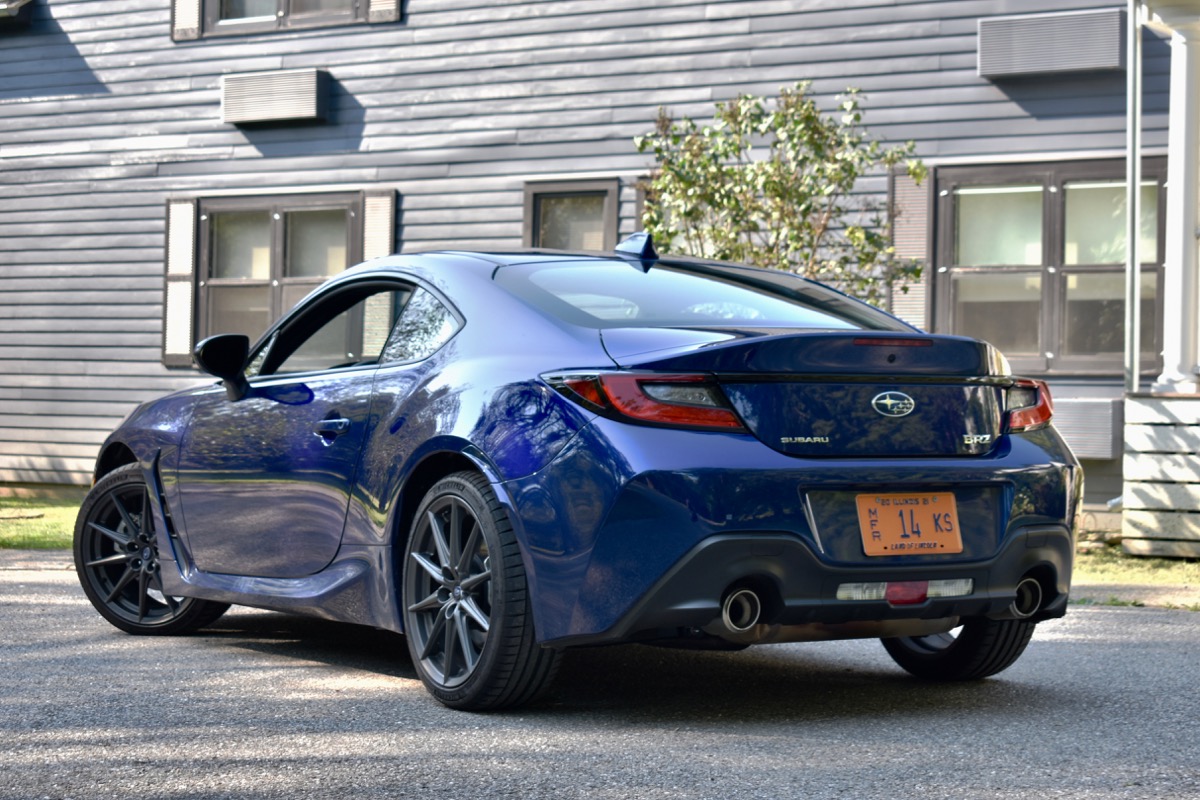 Toyota hadn’t released GR 86 pricing at the time of publication but said the BRZ twin would have a sub-$30,000 base price (including destination). If the two companies follow past practices, the GR 86 could undercut the BRZ slightly in price, with the BRZ offering more standard equipment.

Choosing between the “Toyobaru” twins will likely depend on personal styling preferences, and which dealership offers the best experience. The two cars also don’t have much direct competition, aside from the convertible-only Mazda MX-5 Miata and four-cylinder versions of the larger Ford Mustang and Chevrolet Camaro. The redesigned 2023 Nissan Z will likely be priced higher than the BRZ, but will also boast a 400-hp twin-turbo V6 engine.

Previous-generation BRZ sales were just a drop in the bucket compared to Subaru’s bread-and-butter crossover SUVs and wagons, which explains why so few automakers are interested in sports cars these days. If the 2022 BRZ has the same lifespan as the original, the auto industry could be deep into its electrification push by the time it needs to be replaced. So if you’ve always wanted a traditional sports car but never pulled the trigger on one, now might be the time.

Guru9X34W5 Interesting to get a bit more performance

Have you driven a 2022 Subaru BRZ?
Rank This Car

Enter your zip to see incentives for a new BRZ in your area.

Will the doors be metal or aluminum? The roof, hood, and bumpers were mentioned by Subaru as being manufactured out of aluminum - but what about the 2 doors?